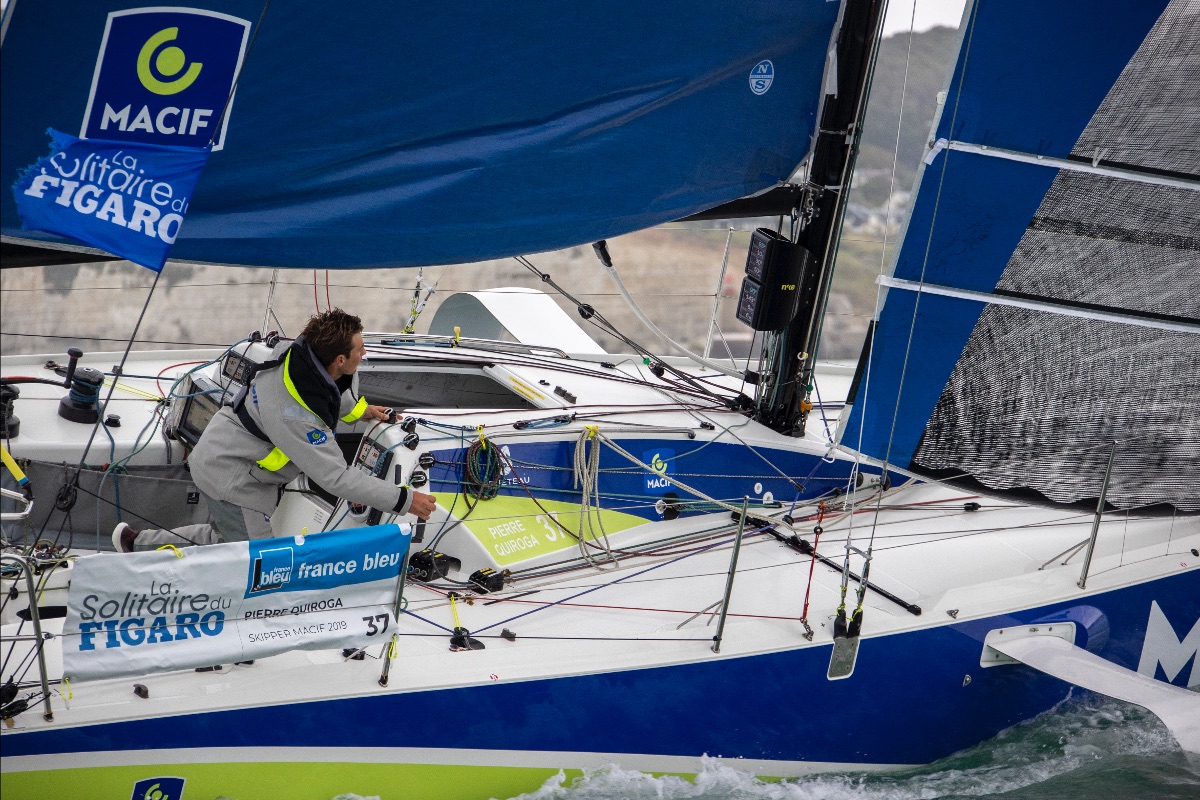 Stage 3 of the 52nd La Solitaire du Figaro starts at midday Sunday local time and will take the 34 solo racers a marathon 624 nautical miles from Fécamp in France to the Bay of Morlaix in Brittany.

The route opens with a reach to a mark east of the Isle of Wight, before climbing north at Land’s End to cross the mouth of the Bristol Channel, passing Lundy Island, to round a buoy at Saint Gowan – south of Milford Haven, Wales. Then it’s back past the Scilly Isles to the finish off the popular north Breton port.

With the prevailing winds still from the east, this third stage of four looks like another speed stage; reaching and downwind running while fully observing the strong tides in the English Channel and then the Bristol Channel.

According to many of the top racers, this could be another ‘rich get richer’ stage, where the advantage of getting out of the lighter winds under the huge cliffs of Fecamp and the Alabaster Coast will increase on the 70 miles across the Channel to the South Pullar mark.

From its midday start, the leaders should round this turn at South Pullar – five miles south-west of Selsey Bill – at dusk. Then Monday is a long 200 miles downwind to Land’s End passing the Longships Lighthouse.

It is a 105-mile reach during Tuesday morning and afternoon to the Welsh mark, which is the first time the Figaro fleet has turned here. The return reach under Code Zero or J2 headsail is open, with no marks of the course, other than the Scillies observing only the TSS zones.

General Classification leader, Pierre Quiroga (skipper Macif 2019), starts in a very strong position, with a time advantage of one hour and 36 minutes over second placed Xavier Macaire (Groupe SNEF), who in turn is just 13 seconds up on Tom Laperche (CMB Bretagne Performance). There is then a gap of nearly one hour to the fourth placed veteran Gildas Mahe (Breizh Cola).

Quiroga, the 28-year-old from Hyères, who is on his sixth La Solitaire du Figaro, starts with little pressure. He already achieved one of his goals winning Stage 2. He has good all-round speed and has twice underlined his free-thinking philosophy and confidence, breaking from the fleet to extend his lead into Fécamp.

However, as was made clear on the second stage from Lorient to Fecamp, no skipper is immune to technical failures or bad luck. Macaire, Stage 1 winner, suffered a double whammy. First his navigation computer crashed during the wet, windy and bumpy upwind stage round the top of Brittany, and then he hooked a fish pot round his keel.

On the eve of leaving Fécamp, Macaire said. “It is not over yet, far from it. I have done the same thing as before the first and the second legs. I have refocused, I am concentrated, and we prepared the boat. I also spoke with my mental trainer to tackle the third stage in the best way possible by not focusing on the past but rather focusing on the future.

“We’re only halfway there, the goal is to get it right until the end. The stopover here has been long enough here in Fécamp, we had three full days of rest, which allowed me to recover well because the first two stages were hard, physical, intense.

“We were upwind a lot and the boat is not very comfortable in these conditions. It is physically demanding, heeling, slamming and wet a lot. Now I feel ready to start again and this rest will be useful for the whole end of the race. This is important because there are two big pieces left before the final arrival in Saint Nazaire, which will follow one another quite quickly. The end of the race will be intense. “

The leading international skippers lie 17th, 18th and 19th in the General Classification. All three are looking for a really strong showing on this third stage, a top five to get their challenges back on track, according to their pre-race hopes and expectations.

Ireland’s Tom Dolan (Smurfit Kappa-Kingspan) is five hours and three minutes behind Quiroga. Roberts, remarkably, is just two seconds behind his Irish rival on accumulated time and Switzerland’s Nils Palmieri (Teamwork) is another 44 minutes behind the Briton.

Dolan, fully rested and determined, commented, “The bottom line is I have made bad starts and have not been quick enough early in the race, especially at night. now it is important to me to get a good result on these next legs.

“We are only halfway through. I just need to work at it, back to basics, prepare the boat well, do the weather well. I know how to do this, and this next leg is a change of weather regime, so I am putting these previous legs behind me and looking forwards. But in this class, in this race there are no hiding places.”

Roberts, who was 10th last year, and has a career best of ninth, said: “I treat each leg as an individual race. There is the overall series and you are just trying to not lose. But right now, if you talk about winning (overall) it is not impossible but it’s a big ask. I am about five hours behind, but each leg is its own race. I am going out and taking each leg as its own race.”

The skipper of Seacat Services walks the course: “I don’t know how close we will be to the English coast. We will go round S Pullar, and then go south for the tides, and then there is a shift to take you back north. We should be at that turn in English waters around sunset. I like the crossing of the channel, getting across is about getting the trajectory right with the tide.

“It is more of a reach on the Figaro 3 and there will be light winds off the coast here, getting out of that well will be important and if you can get clear early then there is a chance to extend. The story of this La Solitaire du Figaro seems to be ‘rich get richer’ courses.

“This leg will be a bit lighter, but no shut downs. We should get 12-15 knots to reach across the Channel, then VMG downwind to Land’s End with up to 20 knots. A big kite all the way. It could be light by Lundy, but all straight-line sailing.

It is a three-and-a-half-day course. That leg is Code Zero, then kite up to come back. Then Code Zero/J2 into Roscoff. There is a little low pressure hovering down off Portugal which might bring some rain and thunderstorms.”