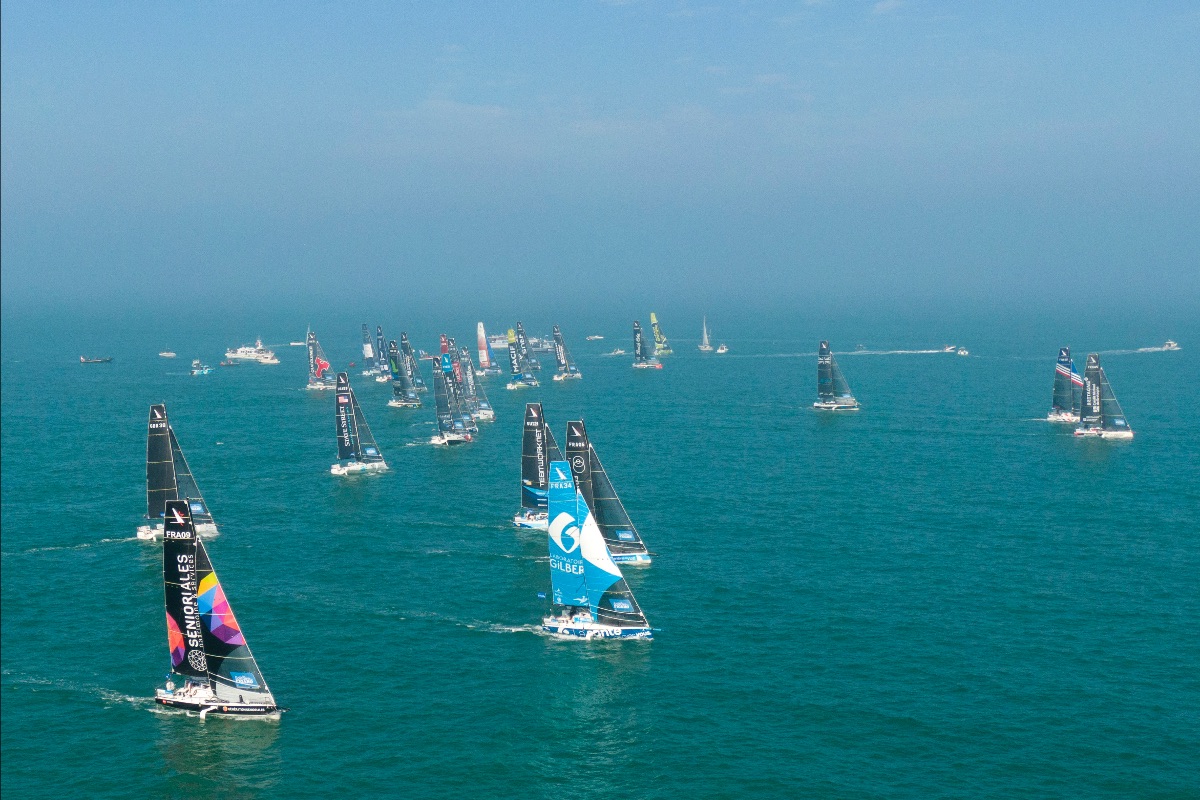 The third stage of the 52nd La Solitaire du Figaro, a 624 nautical mile race from Fécamp in France to the Bay of Morlaix in Brittany, commenced on Sunday afternoon in warm conditions with a light easterly wind.

The leg opened with the fleet reaching in light winds. The local sea breeze gave decent conditions to get away from the high, white cliffs which surround Fécamp and the North Easterly gradient wind appeared to come in early to see the fleet racing north at 8.5 to 9 knots.

Strategies on the approach and rounding to the Pullar mark – just four miles out from Selsey Bill – and then the choices in the morning hours of Monday could shape the outcome of the stage. Any initial advantage could be quickly magnified if the reach to the English coast is quicker than expected.

The competitors will have to make a strategic choice early on as they come out of the Channel, that is whether to go south of the Casquettes traffic separation zone (towards the English coast), or to instead stay close to the Channel Islands.

Most weather gurus suggest a key gain could be made here, but the risk is high. Competitors would have to sail more miles if the timing of the Easterly wind strengthening across the course from the south does not fill in as per the weather models suggest.

The breeze is forecasted to build off the South West corner of Wales. And then it is set to become very messy on the leg towards the finish near Roscoff on the Baie de Morlaix.

Some models show very light winds and strong adverse currents that the leaders might struggle to pass Bishop Rock at the Scilly Islands before a cut-off low pressure approaches from the south to give a light upwind finish. Options will remain open even here, the last big choice being whether to pass east or west of the Scillies TSS (Traffic Separation Scheme, an exclusion zone reserved only for shipping).

Pierre Quiroga (skipper Macif 2019), who holds a lead of 1 hour and 36 minutes on the General Classification, made an excellent start and quickly overtook the young French rookie Arthur Hubert (MonAtoutEnergie.fr) who lead the fleet at the first mark. But as the 65 miles reach north across the Channel towards the Pullar mark unfolded, Xavier Macaire (Groupe SNEF), who is coming second overall and won Stage 1, was almost alongside Quiroga and matching his speed.

Speaking to the assembled early morning crowds in Fécamp Quiroga smiled, “It is nice to have sunshine again at the start. I don’t remember having so much sun on any La Solitaire du Figaro before. It is a pleasure.

“But I am a bit stressed because this is a complicated leg with a lot of light winds, tidal gates and transitions to manage. It will be hard to manage everything perfectly. I think this might be a decisive leg but I want to enjoy it. The forecast has got a bit better than a few days ago with a little more wind coming in.”

Bertrand Pacé, the former French America’s Cup racer who is a coach with the Lorient training group said, “This promises to be a difficult stage with light winds at the start but a building breeze for the second part. And a lot will depend on the first part of the race, there is a bit of everything. There are a lot of traps, a lot of transitions and we finish on strengthening tides, the coefficient building to 100 and so there will be strong currents at the finish. The first 36 hours can be crucial.”

Britain’s Alan Roberts (Seacat Services) who lies 18th overall has already delivered on his first pledge, leaving the dock with the promise to start better and attack hard, looking forward to sailing through his native English waters this evening, even if it is only for a short time. He was fourth at the first buoy and passed Tom Laperche (Bretagne – CMB Performance) who had to make a penalty turn apparently for touching the mark.

Roberts said, “This stage is going to be really different from the others. I feel good, really ready to attack. The first 24 hours are not going to be easy, you have to manage to get away from this coast here, then take the right course to reach the Pullar buoy in England. I feel quite comfortable in these conditions which I like when you have to find speed.

“I am happy to think I will be back sailing on British waters. Obviously, I know the whole south coast of England quite well, but unfortunately, we are not going to be close to the shore, sailing through the bays this time.”