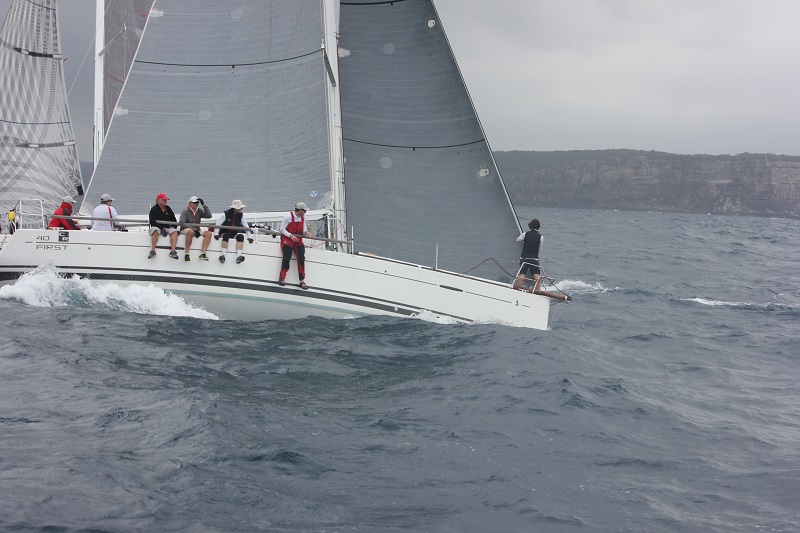 Beau Geste and JustADash have cleaned up Division 1 and 2 respectively at the 39th Sydney Short Ocean Racing Championship (SSORC) hosted by Middle Harbour Yacht Club, each winning all three races.

Phil Dash, at the helm of his Beneteau First 40, JustADash, also won all three Division 2 races, beating the Matt Wilkinson skippered Farr 30, Foreign Affair and Philosophers, skippered by Peter Sorensen, by four and a half and eight points respectively.

Dash sailed his usual exemplary regatta, in fact this is the fourth straight year he has won Division 2 at the SSORC.

The two Premier divisions sailed a two-lap windward/leeward course and then a triangle and windward/leeward race off South Head to finish off the regatta. JustADash was good across all ranges of racing.

“It was very lumpy – leftovers from yesterday’s north-easterly breeze and choppy – because of the south/easterly that clocked further east as the day went on,” Dash said.

“The guys did a good job. We had Foreign Affair chasing us all day and the bigger boats ahead of us. We had to work hard to hold our time,” Dash ended.

MHYC member Jeff Carter and his crew were at the top of their game with Edake, claiming the Farr 40 component of the SSORC. Carter defeated his nearest rivals, Zen (Gordon Ketelbey) and Double Black (Rob Pitts) for the top spot.

Finishes were a lot closer than the scores indicate – six seconds was all that came between Edake and Zen in Race 1, Edake lost Race 2 by eight seconds to Exile etc – the difference being that Edake won three, placed second in two and finished fourth in the final windward/leeward race, whereas the rest of the fleet did not sail consistently.

“Yeah, that final race, we didn’t even need to sail, but we wanted to compete. We started aggressively, but were OCS’d, so it took us a bit to get back into it, Carter commented.

“It was hard steering because of the south-easterly swell. The crew were yelling ‘too low and too high’. The south-easterly to easterly breeze wasn’t easy either; at the start of racing it was 14-15 knots, but dropped to 10-11 knots.

“Hats off to the guys who came up from Melbourne; Double Black and Nutcracker (Rob Davis/Andy Baker). We’ll have at least 10 boats at our next regatta at Pittwater, including these two,” Carter ended.

Adrian Walters’ Shaw 11 metre, Little Nico, edged out Chris Way’s Melges 32, Easy Tiger III by half a point to win the Super 12’s trophy at the SSORC. Rod Jones was third with Machiatto, but the Queenslander fell out of contention for the top prize after blowing up a runner block in yesterday’s Race 4. It cost him dearly.

The fleet traced the 7 Islands Race course that a separate fleet sailed in the SSORC yesterday, taking in some of Sydney’s most famous small islands, both sides of the Harbour Bridge. However, they had a heart-stopping scratch start off MHYC – no room for mistakes in such a narrow channel.

One of Walters’ crew, Mitch White, said it is a credit to the Super 12s handicapping system that disparate boats with bowsprits, measuring between 30 and 40 feet, could finish a race with exactly the same time after their handicaps were applied.

“Look at the top two finishers point difference – and at Race 3 yesterday, when Machiatto (an MC31) and Easy Tiger ended up with exactly the same finish time. The Super 12s are exciting, sailing outside their usual events, especially in heavier winds.”

Full results and all information at: www.ssorc.mhyc.com.au