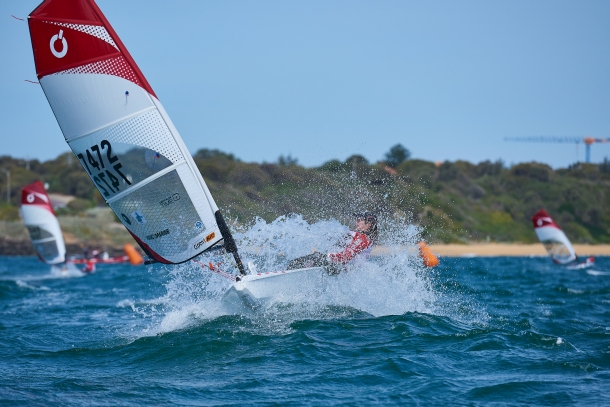 The Australian O'pen Cup 2015 was held from January 18-22 January 2015 at Sandringham Yacht Club in Sandringham, Victoria. Racing was held in Port Phillip which offered a perfect range of conditions for the Junior ISAF skiffs.

Eighty three competitors ranging in age from eight to eighteen came from across Australia, Europe, New Zealand and the US. Queensland sailor Kristen Wadley (three time female world champ) and local lad Jack Challands (current U13 world champ) were the ones to watch – but a big contingent from Western Australia along with top sailors from New Zealand and the Czechs Republic kept everyone guessing till the scores were tallied on the last day.

Kristen set the pace early with three straight wins in choppy 19 knots conditions, but a win each by Kiwi's Sean and Liam Herbert heralded what was to come. Jack stayed with the leaders with solid top four finishes. On the 4th day the wind dropped to a gentle seven – eight knots with glassy seas and Sean laid down the gauntlet with three straight wins. Kristen held her lead – just.

BIC sailors don't always take their sailing seriously though – the number one rule in the handbook is to have fun. On one sunny morning, teams competed for recognition as the best costumed sailor, stunt sailing and general pirating. Another afternoon the sailors had a chance to meet with Jessica Watson. She received more than one offer to join her next round the world epic from the keen BIC sailors.

The last race of the series turned out to be a nail biter! Jack took an early lead but lost it to Czech, Veronica Zivna who went on to win the race. Kristen, meanwhile, recovered from a disastrous start and mid field position to take third behind Sean. Australian Kristen Wadley took the series from the Kiwi brothers Sean and Liam.

The real winners were all the kids though, who had a great time and learnt skills they will no doubt use when they progress to 29er's, Lasers or Moths or go sailing round the world with Jessica. The future of sailing is with kids like these.