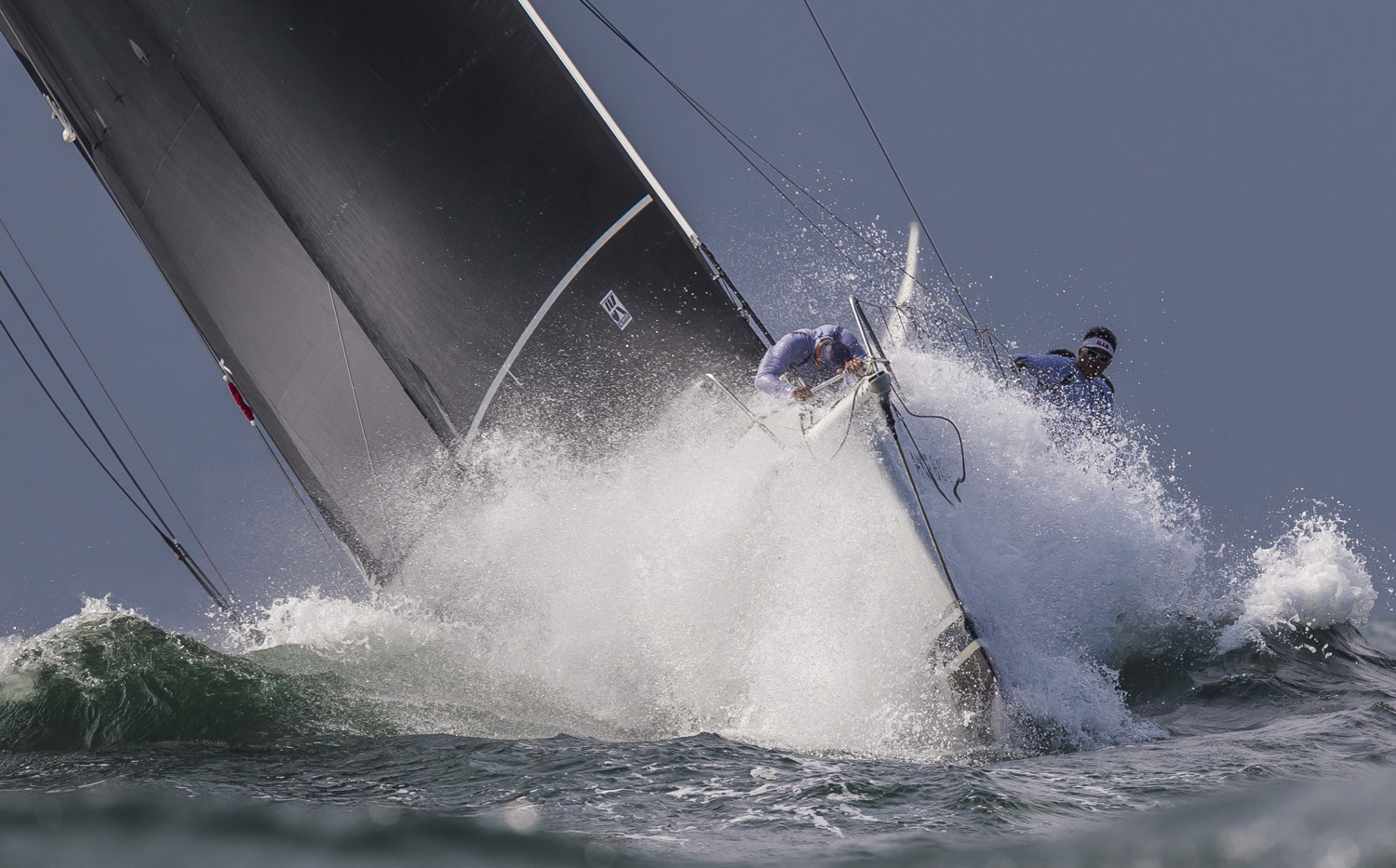 Tiffany Koo tore up the track on day three of the China Cup International Regatta as the Malaysian skipper steered Hero Racing to a commanding lead in the battle of the big boats.

Koo ruled the waves last year at the China Cup and, after scores of 1,3,2 in Saturday’s strong breezes and big swell, Hero Racing now holds a four point lead over the TP52 Standard Insurance Centennial Racing skippered by Ernesto Echauz from the Philippines. “We had a good day,” said Koo, “but it was never easy. In the second race we couldn’t get the spinnaker pole to work properly so the crew were having to work as a human pole to keep the sail flying downwind.”

After two frustrating days of no wind, Daya Bay came good with moderate to strong breezes gusting up to 20 knots, although a rain cloud later in the afternoon softened the wind significantly and shifted the direction by more than 40 degrees.

After two good scores in the first two races for the Beneteau 40.7 fleet, the crack crew of professional Kiwis on board Yiihua Pocket Team New Zealand came unstuck in the third race. Helmsman Chris Steele was disgruntled with the day, despite results of 1,2 to open their account. It was the 14th that left Steele with a bitter taste. “We didn’t sail that well all day, to be honest. We were lucky to win the first race when a boat from another fleet broached out of control and took out Wanhang Longcheer, who were leading at the time. Then the 2nd place was OK, but everything went wrong in the next race. We got an OK start, not quite the best, but then a boat collided into us on the first beat which put us back a bit.”

It got worse when the wind shifted and disappeared on one side of the course, putting the Kiwis right to the back of the fleet. Considering where they were, fighting back to 14th was a small victory for Guy Pilkington’s crew. However, the New Zealanders have given themselves a mountain to climb in their bid to win the division.

If it wasn't for the unfortunate incident with the broaching boat that knocked them off the lead of race one, Wanhang Longcheer might have won all three 40.7 races today. Skipper Steve McConaghy said he had been “quietly confident” of being able to defend the title from 2015, but even the scale of his team’s dominance took the Australian by surprise today. “We got some great starts today and that made life easier from there. Port tacking the fleet off the start line of the last race gave us a useful jump.”

Lying in second place is Jono Rankine’s Cheung Kong Sailing Club. “We’re very happy with that,” said Rankine, a New Zealand expat. “We’ve got four pros on board and the rest of the crew don’t sail very much, plus we’ve got the language barrier so to get a result like we did today makes us feel pretty good when we’re up against this kind of competition in the 40.7 fleet.”

Oman Sail have sent a team to the China Cup for the first time and Fahad Al Hasani’s crew are excelling themselves in the ASAF Class, winning both races ahead of Stanley Chan, whose Singaporean crew scored two second places.

It was a testing day when just keeping the wheels on the wagon was an achievement in itself. One of the Bavaria 37s lost control a few moments before the start and crashed into the side of the catamaran starting vessel. There was a clash of rigs in a port/starboard incident between two Beneteau 40.7s yet both masts survived without incident.

Across the two races courses and ten racing divisions, Saturday provided plenty of drama. Sunday concludes the China Cup and the forecast suggests a slightly gentler race course with 10 knots of breeze expected.