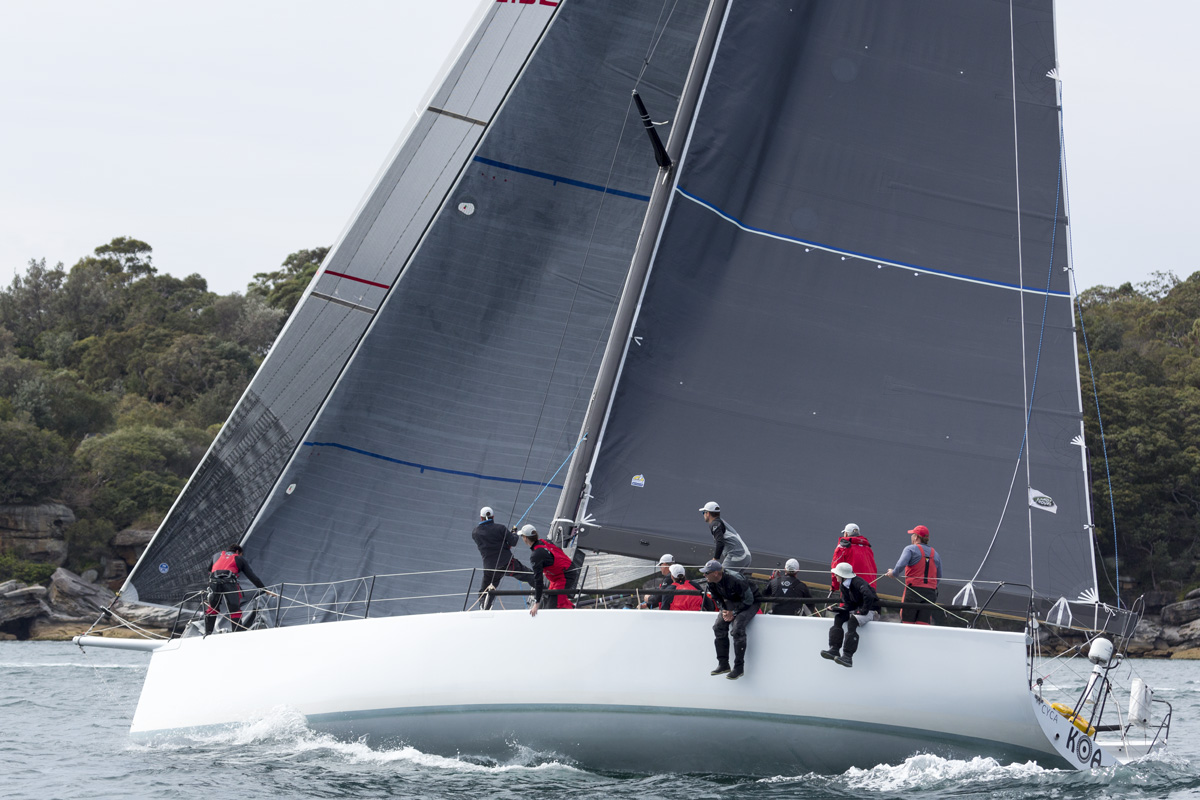 Outstanding conditions delivered a record-breaking run to win the treble for Andy Kearnan/Peter Wrigley’s Koa in the Flinders Islet Race 2 of the CYCA’s Blue Water Pointscore this weekend.

So fast was the racing that a second TP52, Celestial (Sam Haynes), also broke the previously held record by 7 minutes, following Koa over the line.

The fleet took off from Point Piper on Saturday morning in a north-westerly. Celestial and the South Australian Mills 45, Concubine (Jason Ward) were early frontrunners as the yachts pushed out of the Heads into a slight swell and down the coast to Flinders Islet, counting down to a meeting with a powerful south-westerly front.

There were two schools of thought on the approach to the Island, with some yachts heading towards the shore and others heading seawards.

Peter Wrigley said their decision to go with the latter gave them the edge. “It was down to the navigators. We stayed out, waiting for the front. When it hit, we were hanging on for about 20 minutes and then it settled down to around 32 knots.

“We were neck and neck with Celestial going around Flinders Islet – within metres of each other – then when we came out the other side, it was a sprint.

“We saw wind across the deck maxing out at 42 knots in the gusts and our own speed topped at 22 knots. It’s probably right up there with the fastest we’ve ever gone. It was spectacular.

“The boat performed well and that was down to good preparation with a great crew. It was a day when everything just clicked. We had a few minor dramas but we recovered well and that could have been the difference.

“It’s a great result and gives us a good position in the series – our end goal is to win it. Everything is about the Blue Water and Hobart. We’re second at the moment with plenty more races to come.”

“The TP52’s are great boats to sail, there’s really tight competition in the class and anyone on their day can get the result. Bring on the next challenge.”

Outside of the top group the joy of the race was shared by Noel Cornish, whose Sydney 47, St Jude, topped ORCi Division 2.

“It was too much fun to have in one day. A fantastic race – demanding, exciting and exhilarating.

“We spent much of it chasing Snowdome Occasional Course Language. They had an outstanding race and we just couldn’t catch them. They chose to go in closer to the shore which put them in a very good position rounding the Island.

“Downwind they really took off and we tried as hard as we could to stick on their tail.”

Having undertaken some fairly extensive work on the boat over winter, Cornish has noticed some big changes in performance but that has of course come with a new rating.

“The boat is performing much better, but the IRC handicap went up accordingly. We have to sail harder, due to the increase, which is a challenge but a thrill.”