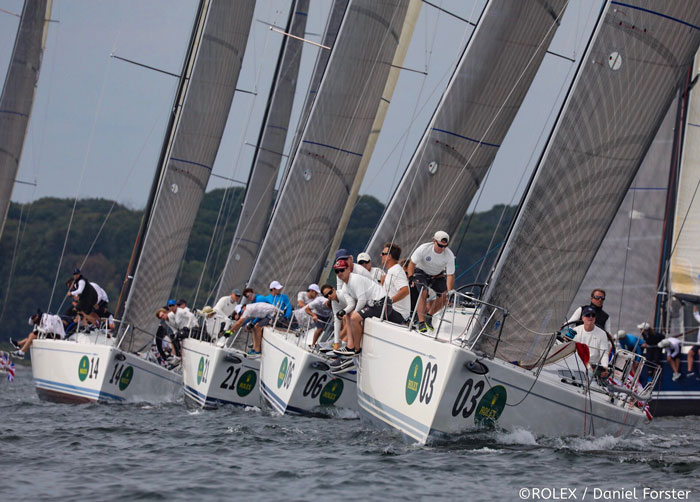 Newport, Rhode Island: Day 4 of the 2017 Rolex New York Yacht Club Invitational Cup was the sort of day when things can and did go wrong, but the top two from the USA and Australia held strong.

The racing was held inside Narragansett Bay in a shifty southerly breeze with thick fog bank hovering on the windward edge of the course and occasionally working to leeward of the windward mark. Both of the leading boats had moments of doubt, but both showed their mettle with impressive comebacks and were the top two boats on the day.

The biennial Corinthian championship has attracted amateur sailors representing 14 yacht clubs from around the globe to race in the ultimate one-design, big-boat competition. With standardized sails and rig tune across the Swan 42 fleet, the focus is square on the sailors to sort out the remaining variables.

Competitors throughout the fleet have noted how even the boats are this regatta. Mistakes, especially off the starting line, or early in the first beat, can be extremely costly. Recovering from them requires a lot of skill. A little bit of luck never hurts, either.

“Two-thirds of the way (up the first beat of the second race) we were looking really sketchy,” said Belgiorno-Nettis’ tactician Michael Dunstan.

“Then the fog came in and we didn’t have any idea what was going on. We were on the opposite side of the local team, which was a bit concerning, but the shifts played our way at that last bit, so we got lucky.”
Dunstan might be a shade modest in his assessment. Even the one team ahead of them in the overall standings has noticed Royal Sydney’s superlative speed, which has resulted in five wins in 11 races.

“They’re going fast,” said Southern helmsman Marcus Eagan. “They’re great at what they do, (Guido Belgiorno-Nettis) is a great sailor; they’re a great team and I have tremendous respect for the way they’re sailing. Hopefully we can continue to be right on their tail tomorrow, and I’ll be happy.”

According to Eagan, Southern’s success in this regatta—to call it surprising would be to ignore the way Eagan and company dominated the Resolute Cup last year—has a lot to do with a very patient approach.

In Race 2 today, the Southern team got squeezed out shortly after the start and had to tack and head to the right side of the track while those that could stuck to the left. It looked dire, but they quickly flipped that script.

“We did not have a good start in the second race today, we tacked on the port pretty quick and just tried to get the boat moving as fast as possible and hit our targets,” said Eagan.

“It seems like in this fleet, clear air is king and once you get it you separate into that front half and then from there you pick people off. But clear air and hitting targets are the big thing in the first of the quarter of a mile of the beat.”

In general, Eagan added, the Southern Yacht Club has favoured a very conservative strategy this event. Of course, that’s easier said than done.

“You just put odds on everything,” said Eagan. “If you want the left side, you don’t necessarily have to win the pin, you just start toward that end, as long as you have the clear air. That’s kind of the way we do it. And if boats are close, we definitely don’t risk it, we always go for the duck. Keeping manouvres to a minimum, I think that helps quite a bit too.”

For the second straight day, the most active team in the overall standings was the New York Yacht Club. With a fourth and a second, the home team went from sixth to fourth, with a three-point cushion over fifth and a nine-point deficit to third. It’s been quite a turnaround for John Hele’s crew on Daring, which was 11th after the first two days of racing.

“We got much better starts [the last two days],” said Hele, who is sailing in his fifth Invitational Cup. “In this fleet, if you’re not in the front of the starting line, you’re in a whole different league. We’ve had great boat speed and Brad picked the right way to go.

“This is the best fleet of Swan 42 helms and tacticians that we’ve ever had. This is the most competitive Invitational Cup. It’s really something to get off the line well, but we did it today, and it really paid off. So we are happy and looking forward to tomorrow.”

So is the rest of the fleet. There’s one race left to go and then the Rolex Awards Dinner at Harbour Court tomorrow evening will bring the fifth edition of this Corinthian classic to a close.

The final Race 12 will be held tomorrow from 11am local time.