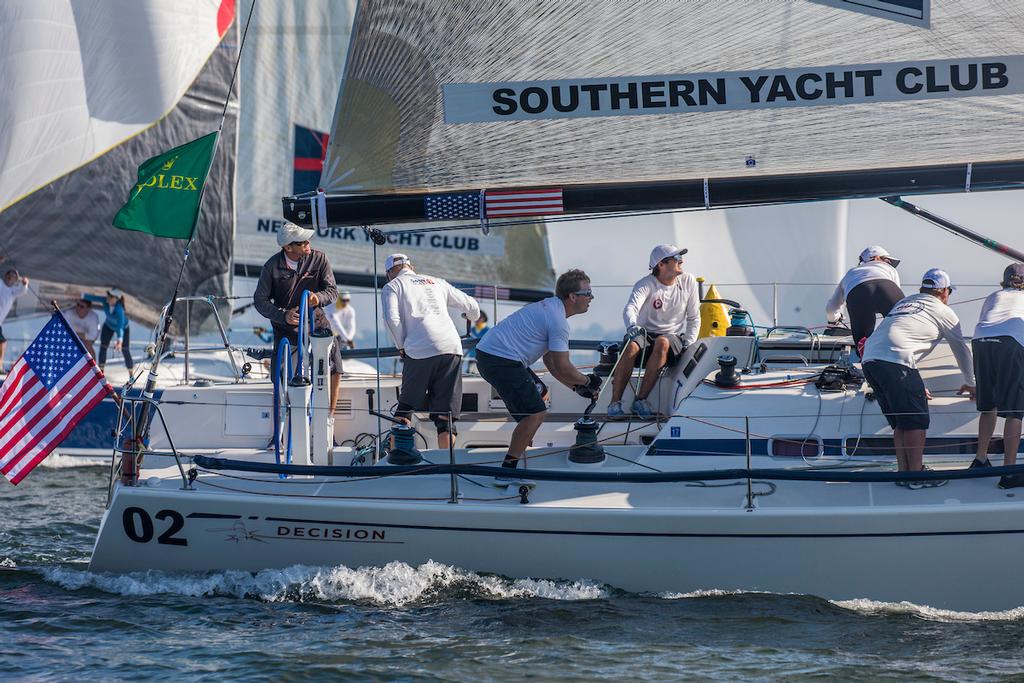 Newport, Rhode Island: The morning dawned with dense fog and little breeze on Narragansett Bay, but by mid-afternoon the sky had cleared and the same could be said of any ambiguity regarding which was the best team at the 2017 Rolex New York Yacht Club Invitational Cup.

In today's single race, the Southern Yacht Club was as sharp as they had been in the previous 11 races, starting strongly and never wavering. SYC eventually finished second to Royal Thames in the final race, and four places ahead of their only remaining competition for the overall trophy, Royal Sydney Yacht Squadron from Australia (Guido Belgiorno-Nettis).

“It can't get any better than this,” said winning skipper Marcus Eagan, surrounded by a large group of club members who travelled to Newport to cheer on their crew. ”It's great to celebrate with friends and members and long-time sailors.”

With a margin of eight points over second-placed RSYS to start the day, and only one race remaining, Southern Yacht Club was in a comfortable position. But light air and fog can dampen the confidence of even the most credentialed sailor and a long delay only added to the anxiety.

“It was nerve wracking this morning waiting for the breeze,” said SYC tactician John Lovell, who has waited out plenty of wind delays during his 12-plus-year Olympic sailing career.

“At one point we thought they might call it, but the breeze filled in, and we had to go to the whip and sail our best. I had a knot in my stomach the whole time. We were lucky enough to get ahead of (RSYS) and then we just tacked on them as much as we could.

“We split away when we thought we were maybe second and third and wanted to stay in the top group. We wanted to stay ahead of them; that was the whole goal.”

Southern Yacht Club was the first rookie competitor to win the NYYC Invitational Cup since host New York Yacht Club won the inaugural competition in 2009. But the team, which was composed of veteran sailors with many significant campaigns under their collective belt, approached the regatta with the appropriate commitment.

Buoyed by the membership, and especially crew member Stephen Murray Jr., the team was able to purchase a boat to train on all summer and sail in regatta.

“It all started back at the Resolute Cup when we qualified for this big event,” said jib trimmer Andrew Eagan. “We were super excited about it and put our heads together to try and figure out who would be the best team. This event really takes a lot of hours, a lot of days.”

Throughout the regatta, the Southern team was pressed hard by Royal Sydney Yacht Squadron. The final winning margin of 12 points between first and second doesn't reflect how even the top two teams were. Were it not for one bad race, Royal Sydney and Southern might've been all but tied going into the final race.

“Hats off to Royal Sydney, they sailed super well. They hadn’t really been in the boat as much, and they really got better every race,” Egan said.

Eastern Yacht Club's firm grip on third place going into the final race quickly became a lot more tenuous when they were called OCS and had to return to restart, while New York Yacht Club, which started the day in fourth place and carrying a tremendous amount of momentum, punched across the line and was quickly into the top group.

John Hele and the New York Yacht Club team would hold on for third place—closing the regatta with six straight top-five finishes—but Eastern was able to grind back during the five-leg race and finish fifth, plenty close enough to the top to ensure they held onto the final podium position.

This event brings to a close the involvement of the Swan 42 one-design, which was instrumental in getting the regatta off the ground eight years ago. The great foundation laid by the Swan 42 class will be carried forward in 2019 with the IC37.

The Club has committed to purchase a fleet of 20 identical keel boats, built by Westerly Marine, to a design by Mark Mills, which will ensure that the world's premiere Corinthian one-design keelboat regatta remains a must-do event for sailors around the world. More information on the 2019 edition will be released before the end of 2017.