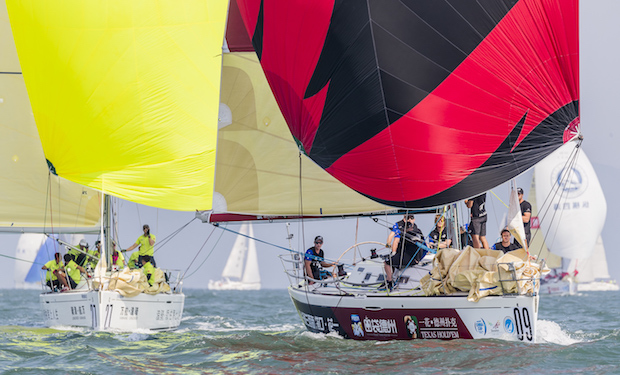 Sunday 29 October 2017, Shenzhen, China: Yiihua Pocket Emirates Team New Zealand has won the China Cup after sailing a strong final day in the Beneteau 40.7 one-design division. The breeze blew in at around 10 knots this morning, setting up the perfect scenario for a big battle between the defending champion Vanhang Longcheer and the America’s Cup winners, along with some other hot contenders that included My Side from South Africa and Team Hollywood from Australia.

Mainsheet man Andy Maloney had said the previous day that Yiihua Pocket Emirates Team New Zealand was feeling confident, although it was Joseph Dennis O’Keeffe’s Longcheer who held the points advantage going into the final day. After the first race of the morning, however, the Kiwis had pulled level with their rivals after a 3rd place to Longcheer’s 4th. Whoever beat who in the final race would win the title.

Josh Junior, New Zealand’s Finn representative at last year’s Olympic Games in Rio, helmed the Kiwi boat to a strong start and they went on to win the race, with O’Keeffe back in 4th place. The winners of the 2017 America’s Cup had finally won the China Cup. “It’s taken us three years to do it, but we’ve finally won the event, exciting!” said Junior. “We knew that if we sailed well we could win it today. We've been making a few mistakes around the race course this week but today we kept improving like we have all regatta; we got a couple of great starts and sailed really well.”

Asked why a team of the Kiwis' calibre hadn’t managed to win on previous occasions, Junior commented: “It's not an easy venue to sail in, often quite light, and a tricky race course to sail on. So if you've spent any time sailing the Beneteaus and sailing here, you're probably at quite a big advantage. But we've learned quickly this time around and we sailed really well.”

The New Zealanders bring to an end a strong run by Vanhang Longcheer which has won the past four China Cups, and no doubt O’Keeffe, Steve McConaghy and the rest of the crew will come back stronger next year to try to take wrest the trophy back from Emirates Team New Zealand.

While it was Junior’s first China Cup, for Ray Roberts who was nipping at the heels of the front two Beneteaus at the helm of Team Hollywood, this was his first time back to Shenzhen since the inaugural regatta 10 years ago.

“The first China Cup was a very exciting event,” said the skipper from Sydney. “Everyone was very excited about China getting into some real sailing and inviting international teams to race in Shenzhen. I really enjoyed it. There was a sense of innocence and happiness and glory for all those that participated in the first event. It was a thoroughly enjoyable regatta. However since the first one, I think the level of professionalism has stepped up a peg or two. Which is good, that's what China needs, more competitive sailing and more international sailing.”

One example of just how Chinese sailing is forging ahead is in Sean Kang’s decision to move from IRC B to IRC A with a new Ker 46, Alpha+. “I used to have a Beneteau First 50 in IRC B which we won many times,” said Kang, veteran of eight China Cups. Alpha+ lost by a point to Standard Insurance Centennial Sailing Team although Kang had no regrets. “I wanted to have more competition in a fast racing boat, and that's why I bought this new boat. More competition makes it more fun, you don't just sail to win all the time, you sail for good competition which is what we had this year.”

With Kang having moved on from IRC B, there was always going to be a new winner and that was TongJi Blue Sharks-Ocean Link Team who won ahead of Team Arctic Tern. Shenzhen Seawolf was the most dominant performer across the whole China Cup, winning all six races in IRC Division C.

Born Fearless was almost flawless in the Bavaria 37 fleet, winning all the races that counted and discarding a worst score of 2nd. It was a similar story of dominance for the Philippine Sailing Association who wiped the floor in the ASAF Keelboat Class. Qingdao Boat Song won the J/80s, Jingrui XT won HKPN B, and HKPN A went to Windseeker helmed by Bridget Chan. “I have won once before, and it’s very nice to win here again,” said Chan. “I love sailing with my friends and also the chance to meet with so many international sailors. The organisers have done a great job every year, with great parties, and the race village is good to walk around and enjoy after racing. I love the whole atmosphere.” Which is why sailors keep on coming back year after year, not just from China, but from every corner of the globe.

The 12th edition of the China Cup International Cup will take place at the end of October 2018.