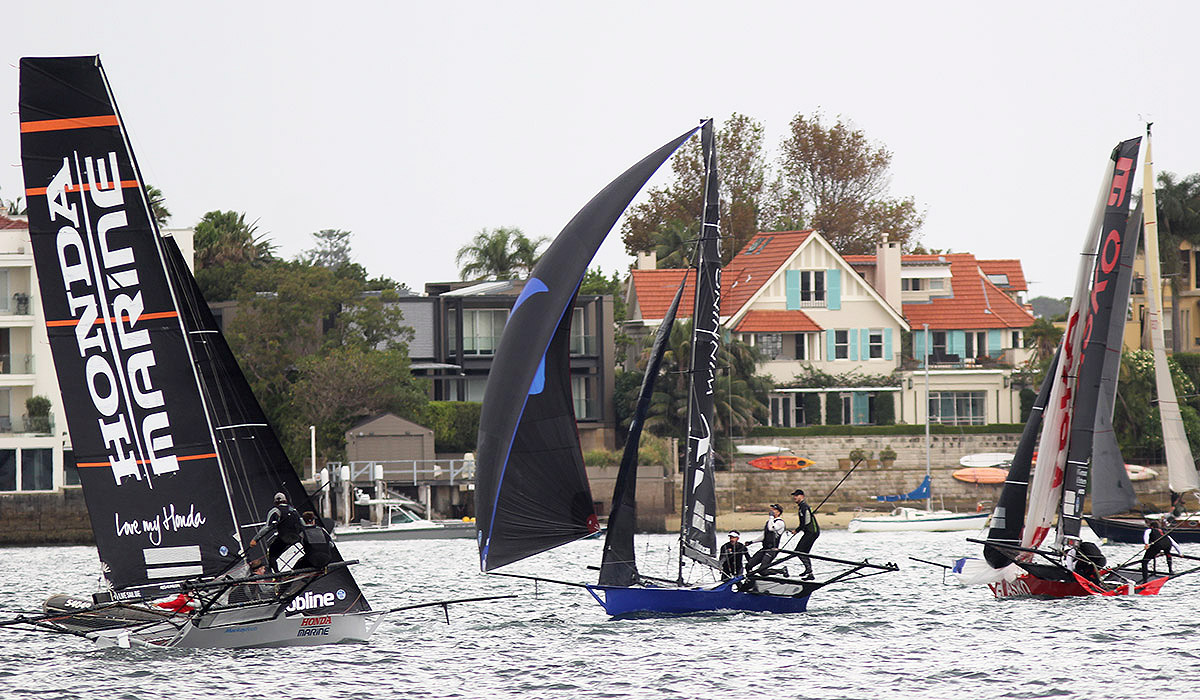 With a lack of wind at the scheduled race start time, and the prediction of more wind due later in the afternoon, race officials decided to hold the teams on shore until a firm decision could be made about the day’s racing on Sydney Harbour.

When the first wind from the south came in around 2pm the decision was made by the race officials and the race got underway one-and-a-half-hours after the scheduled time.

Following a race which could best be described as ‘being in the right place at the right time’ the Honda Marine team of David McDiarmid, Matt Steven and Brad Collins crossed the finish line 1m17s ahead of Smeg, to score their third win of the regatta.

Honda Marine heads the poins table with a score of 9 points, followed by Smeg on 13 points, Winning Group (John Winning Jr.) on 16 (includes an average in Race 2), Asko Appliances on 28, ASCC (Josh Porebski) on 42 and Finport Finance (Keagan York) on 43.

Conditions were light as the fleet sailed from the start off Steel Point and the fleet quickly spread out as each team searched for the best conditions.

The following leg back to the bottom mark was nothing short of crazy as Winning Group sailed into a lull off Bradleys Head and went from the lead to near last midway through the run.

As different teams found themselves in some breeze, the lead changed a number of times before Honda Marine finally reached the bottom mark 45s ahead of The Kitchen Maker-Caesarstone, with Smeg a further 15s back, followed byAsko Appliances and Winning Group.

Over the second lap of the course the breeze settled more to the SE and the Honda Marine team had little difficulty retaining the lead to score a relatively comfortable win.

Due to the conditions, race officials decided not to sail the second race, and a decision on when it will be sailed will be made tomorrow.

The club will have a spectator ferry following each days' racing, leaving Double Bay Public Wharf at 2pm.

NOTE: THERE WILL BE TWO SPECTATOR FERRIES NEXT SUNDAY MARCH 10