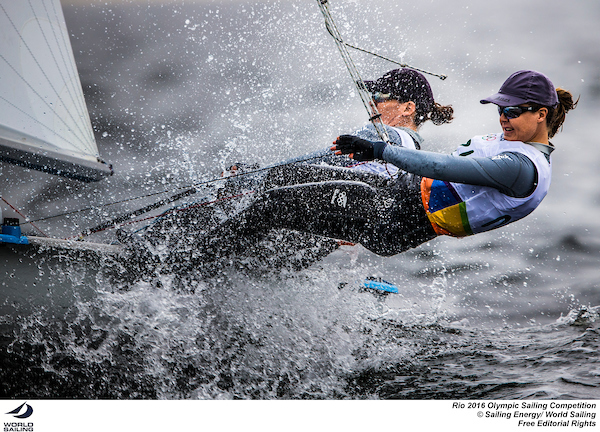 Defending champions Jo Aleh and Polly Powrie bounced back from the disappointment of a disqualification in the first race yesterday to lead the Women's 470 class by two points. The Kiwis were protested for crossing a starboard tack boat but felt they crossed well ahead. The jury disagreed and hit them with a DSQ to go with the bullet they scored in the second race yesterday.

Unfazed by their misfortune, they went out today into the huge conditions and added a fourth and another bullet to their tally. After dropping the DSQ, they have a total of six points, two ahead of overnight leaders Japan. London Silver medalists Hannah Mills and Saskia Clark are tied in third with Camille Lecointre/Helene Defrance (FRA) and Tina Mrok/Veronika Macarol (SLO) who are all on 11.

Jo Aleh described the conditions: “It's crazy out there,” she said. “It's the biggest contrast with yesterday which was shifty puffs and lulls. Today was about as windy as we can handle – we were getting airborne out there!”

The pair are known not to worry about their competitors, prefering to sail their own race. And today they said that was imperative. “It wasn't about boat speed, it was about not making mistakes and about keeping Polly on the wire.”

Polly interjected: “I got fully launched a couple of times.”

Jo said that they haven't let the fact that they are carrying a DSQ as their discard affect their game plan. “It's not about holding off or sailing conservatively. We just sail the way we know we can.”

Australia's Carrie Smith and Jaime Ryan had an 11th and a 17th (which is their current discard) today and are in equal 13th but are only four points from the top 10. Their scorecard of 16,8,11,(17) is quite consistent but they need a good race to bring them back into contention.

As with the mens class, the womens fleet sorted itself out quickly in most races but there were opportunities to pass. The Australians were in good position in both races before being overtaken by a number of boats behind them.