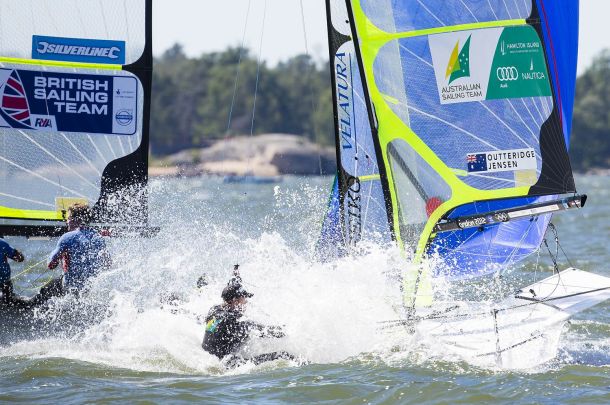 The reigning World Champions from New Zealand dominated both the men’s and women’s fleets at the Seiko 49er & 49erFX European Championship in Helsinki today. With the sun shining brightly and the breeze blowing a perfect 12 to 16 knots, Alex Maloney said the conditions were similar to what they often experience back home in New Zealand. Maloney and crew Molly Meech, the reigning FX World Champions, duly went out and won the first two races of the gold fleet finals, followed up by a respectable 7th in the last race of the day.

The Kiwi girls are really hitting their stride after a bad first day in Helsinki. By last night they had moved up to 7th overall and now, after their two bullets, they sit just a point off the new series leaders, the defending European Champions from Denmark, Ida Marie Nielsen and Marie Olsen. Today’s wearers of the yellow jerseys, Martine Grael and Kahena Kunze, have slipped to 3rd overall. “We were sailing on a header all day,” said the Brazilian who is looking forward to stronger wind tomorrow. “We were happy with how we sailed in the big winds earlier this week, no capsizes, so it would be nice to do it again.”

Maloney and Meech were very happy with their outing and looking forward to another strong showing tomorrow. The only race they didn’t win was taken by British team, Charlotte Dobson and Sophie Ainsworth, whose clear victory in the final race leaves them in 4th overall with a big gap to 5th placed Leonie Meyer and Elena Stoffers.

The men’s 49er Gold Fleet was next on the TV course, and where the Kiwi girls left off, the reigning 49er World Champions picked up the Kiwi baton and ran with it all the way through the three races. Peter Burling and Blair Tuke fired three Kiwi bullets, a perfect recovery from the previous day when they had capsized three times in the strong winds. “We had good boatspeed all day,” said Tuke, “and that got us out of trouble even when we found ourselves on the wrong side of the shifts. We picked up a penalty at the start of race one but still managed to find our way through to the front. And then getting a port tack start over the fleet was like winning a race all by itself.” In the final race their margin of victory was so big that they had their boat back up the ramp and in the boat park by the time their great rivals, Nathan Outteridge and Iain Jensen, had crossed the finish line in 5th place. By the time the final boats were crossing the line, Tuke was already in the TV studio for a live broadcast interview.

The yellow jersey wearers from France, Manu Dyen and Stephane Christidis, slid down a lot of snakes to fall to 6th overall, with Burling and Tuke now holding an 8-point lead over Outteridge and Jensen who moved up to 2nd overall. Earlier this morning on the Magic Marine Morning Show, the top Kiwis and Aussies talked about their battle for 49er supremacy which is shaping up to be one of the great sailing rivalries of the modern era.

The Olympic gold and silver medallists from London 2012 remain the class act in the 49er. Even if Outteridge has lost some of his legendary dominance, the four-time World Champion was still happy with his day. “Maybe the Kiwis were making us look a bit ordinary, but we’re still stoked to keep all our scores in the top 5 today,” said the America’s Cup helmsman for Artemis Racing. “It was super-shifty and when you came off the start line you never knew if left or right was going to pay. You just had to use what was ahead of you, and going up the middle hardly ever worked. But it was great racing, and in one race we had eight boats going round all within 20 seconds of each other. Bring on the big breeze tomorrow!”

Gold Fleet racing continues on Saturday, with a first start at 11:00.

Tune in at 09:00 tomorrow for the Magic Marine Morning Show where we have fantastic guests each day.  Day 5 will feature defending European Champion in the 49erFX, Ida Marie Nielsen from Denmark, and the talented Brazilian, Martine Grael.

Here you can view the video from day 4: https://www.youtube.com/watch?v=cl36MuFZdsg