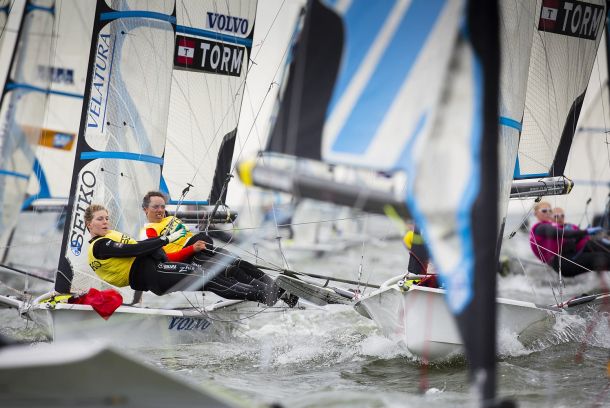 Both the men’s and women’s World Champions sit in pole position going into the deciding day of the Seiko 49er & 49erFX European Championship in Helsinki. In the 49erFX, Alex Maloney and Molly Meech moved ahead of the defending European Champions, Ida Marie Nielsen and Marie Olsen, after a solid day in strengthening winds. The New Zealanders scored 2,5,4 in the 27-boat Gold Fleet, and carry 42 points into the final day, a single point ahead of the Danes. Martine Grael and Kahena Kunze looked set to take back the yellow jerseys for Sunday’s three theatre-style races, but after scoring 3 and 1 in the first two heats they picked up a disappointing 11th in the final heat which puts them in 3rd overall, but still only 5 points off the lead.

As the breeze built throughout the afternoon, touching 18 knots by the end of play, two Dutch crews moved to the fore, but Nielsen and Olsen got on a charge downwind to the finish and just stole victory in the final race, the Danish looking very confident with their speed and boathandling the windier it became. Even when they left their spinnaker drops too late on the previous laps, the reigning European Champions somehow kept the wheels on the wagon and look in good shape to defend their title. Along with the Brazilians and Kiwis, they hold a good margin over the rest of the field, although another Danish crew – Jena Mai Hansen and Katja Iversen – are in 4th place and still very much within striking distance.

In the men’s 49er, Pete Burling and Blair Tuke had a rare slip-up in today’s first race, sailing out to the right and into the wrong corner of the race track, leaving them deep in the pack at the first mark. With the wind barely into double-figures for the men’s first race, the Kiwi World Champions failed to exert their usual boatspeed advantage and could only manage a 16th. It was the Austrians who finished 4th at the 2012 Olympic Games – Nico Delle Karth and Nikolaus Resch – who won the race ahead of Italy’s Jacopa Plazzi and Umberto Molinaris.

As the breeze started to build into the early teens, normal service was resumed as the New Zealanders put the hammer down to win the next two races. Burling and Tuke, unbeaten in a regatta since taking the silver medal at the London 2012 Games, have won five of the six heats in the Gold Fleet final. This gives them an 11-point advantage over their arch rivals from Australia and reigning Olympic Champions, Nathan Outteridge and Iain Jensen. The Aussies sailed a solid first race today, coming 3rd behind the Austrian and Italian crews, but then slid to 15th in the next. Finally in the third race we saw the Kiwis and Aussies in a proper head-to-head, rounding in 1st and 2nd at the top mark. “But then we misjudged our approach to the bottom gate,” admitted Outteridge. “We wanted to come into the marks with some heat, but we overcooked it and didn’t realise how much the breeze had built.”

The misjudgment briefly handed the lead to Great Britain’s Dylan Fletcher and Alain Sign, although the Kiwis proved unstoppable in the stronger wind. “We knew we couldn’t match them boat for boat,” said Fletcher. “Pete and Blair have an incredible amount of speed at the moment, and they maybe 8 kilos heavier than us, so we had to try something different.” Even so, the Brits held on to the lead at the final turning mark, but allowed the Kiwis to gybe-set into stronger breeze on the right-hand side of the course. The Aussies followed suit, and both Antipodean crews managed to get past the Brits on the final run to the finish.

Fletcher and Sign still hold 3rd overall, and are only 3.4 points behind Outteridge. Just a few points further back in 4th place are the recent winners of Kiel Week, Erik Heil and Thomas Ploessel from Germany, the bronze medallists at last year’s European Championship. With the Theatre Style racing comprising three short-course races with boundary ropes, and involving just the top 10 boats in the overall standings, there are still many opportunities for an upset. But as of this evening, things couldn’t be much better for the Kiwis who sit at the top of both leaderboards.

Live TV coverage of the Theatre Style racing starts at 13:00 on Sunday.

Tune in at 09:00 tomorrow for the Magic Marine Morning Show where we have fantastic guests each day.  Day 6 will feature Jena Mai Hansen, Molly Meech, Charlotte Dobson, Dylan Fletcher and Blair Tuke.

Here you can view the video from day 5