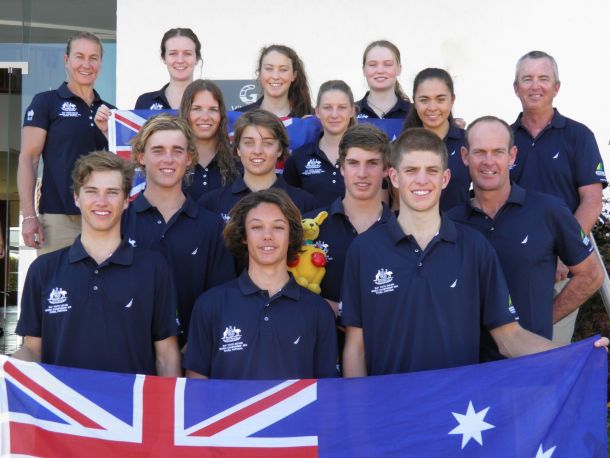 Australia has a strong history at the ISAF Youth Sailing World Championships and with only two athletes returning from last year’s team, the 2014 Australian Sailing Youth Team is a young and new-look team representing five states.

Team manager Brendan Todd says the team is ready to go: “We have all arrived safely and the team is very excited to start racing on Monday.  We have used this week to familiarize ourselves with the venue, acclimatise and set-up the boats, which are supplied to us by the organisers and get some training sessions in before it all starts.”

About the team he adds: “This year’s Youth Team is a young team, which will need time and experience to develop, but I believe we have selected promising young sailors who can follow in the footsteps of Australian Sailing’s current senior athletes. Historically, many of those who compete in the ISAF World Youth Championships go on to participate in and succeed at Olympic and World Championship level as e.g. our Olympic Champions and former Youth World Champions Elise Rechichi and Nathan Outteridge have shown. Their success is a great motivation for our young squad.”

Ten athletes will make their Youth Worlds debut for Australia in Portugal.  Tasmanian Jock Calvert is one of the returning athletes to the team and will be competing his second World Championship in the 293 windsurfing class. Lara O’Brien from Queensland will be racing the female windsurfer event.

“It’s cool to be part of the more experienced members. Last year there were only two people who had not been to a Youth Worlds so this year it’s the opposite and I’m sure it will be fun and we’ll all learn a lot,” Jock Calvert said about being one of two returners to the team.

In the RS:X Boys fleet in Tavira only eight sailors return for their second ISAF Youth Worlds with many fresh young faces entering the mix.

Having been part of the Australian Sailing Youth Team last year, seventeen-year-old Lachlan Gilmour (WA) is also one of the veterans on the team. Gilmour will add his experience from last year’s World Championship to the team in the 420 class together with helm Emerson Carlberg (WA).

“I’m very excited and happy to be part of this year’s Youth World’s team. I have been looking to go for a while and it’s fantastic to have the opportunity to be here this year,” said fifteen-year-old Carlberg about the opportunity to race at his first World Youth Championship.

In the 420 girls fleet another Western Australian crew with Nia Jerwood and Lisa Smith will represent Australia.

New South Welshmen Jim Colley and Shaun Connor will be representing Australia in the 30-boat fleet of the 29er class, while Victorians Michelle Bursa and Chelsea Haynes will contest in the Hobie 16 multihull fleet, which has attracted sixteen teams, including several former medallists.

South Australian state performance coach Brendan Todd is the team leader and RS:X coach.  Todd had success as both an athlete and coach at the ISAF Youth Sailing World Championships.  He competed at the event in 1989 and 1991 in the windsurfer class, winning Silver in 1991, and returned as a coach in 2000, 2001 and 2005 and 2013.  Todd also represented Australia at the Atlanta 1996 Olympic Games, where he finished eighth and at two Olympic Games as a coach.

Belinda Stowell coaches the 420 and multihull crews.  She has been the WA State Sailing Performance Coach at WAIS since November 2004 and was a coach for the Australian Youth Sailing Team from 2005 to 2007.  She coached ISAF Youth World Champions Carrie Smith and Ella Clark to their Gold medal in the 420 class in 2013.  As an athlete, Stowell won the Gold Medal at the Sydney 2000 Olympic Games in the 470 class.

New South Wales Sailing Performance Coach Larry Cargill is the 29er and Laser Radial coach.  He was coach of the Youth Team in 2008 and 2013 and brings a wealth of experience to the Australian Sailing Youth Team as well.

The ISAF Youth Sailing World Championship sees sailors under the age of 19 from around the world descend on Tavira in Portugal to compete in eight events with Australia represented in each.  It is the largest youth sailing regatta in the world.