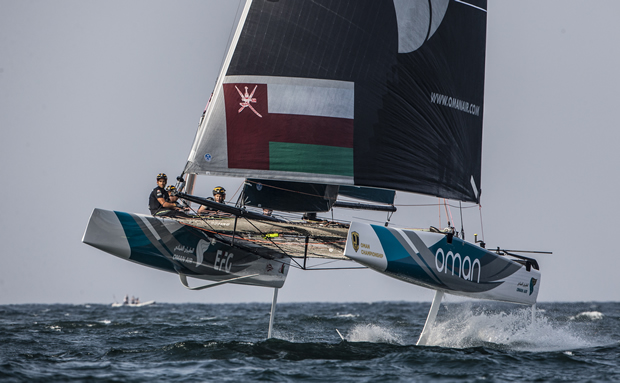 Two leading Kiwi skippers, both of whom have taken over the helms of well-established teams for this regatta, have claimed the lead positions after the first day of racing at the GC32 Championship in Muscat, Oman.

This inaugural championship for the one design foiling catamarans, being run by the GC32 International Class Association in association with OC Sport, got off to a solid start today with five races sailed.

Robertson attributed their success to a team effort, adding “that goes beyond the sailors – it is the whole Oman Air team behind it that makes it happen. We have massive support from Oman Sail and it goes months back. You have to be slick and well-oiled and we were very well prepared. It was a big team effort today.”

While conditions appeared relatively benign with the southwesterly wind typically of 8-11 knots, for the sailors these are some of the trickiest conditions on a GC32 as they are ‘marginal foiling’, requiring for example a massive effort to correctly trim the foils and constant appraisal of whether or not to deploy the gennaker upwind. “There are three or four different modes you can sail in and it was awfully hard to pick the right one,” said Robertson, who won both the last races from start to finish, following good starts. “It was tense quite a lot of times when you have boats all round you sailing in different modes.”

Robertson said that they also benefited from local knowledge within Oman Sail regarding today's weather forecast.

Oman Sail’s program is all about encouraging Omanis to get out on the water and one of the local heroes in this initiative is Nasser Al Mashari, now into his sixth season on the Extreme Sailing Series. “We had lovely pressure and air and it was a great race course,” he said. “We are doing a good job, with good boat handling. We will try to do more and more.”

Minoprio and the crew on SAP Extreme Sailing Team spent the day fighting back from a seventh place in the opening race after part of their gennaker sheet had broken on one of the upwind legs. “We started the day on the back foot and we had to sail well for the rest of the day to climb back up through the fleet to second place,” said Minoprio.

He agreed with Robertson about the difficult conditions in the sailing area off Al Mouj (The Wave, Muscat). “It was about getting good starts and sailing smoothly around the course, or as much as you could given the conditions. It was very tricky and shifty. We just hung on by the skin of our teeth.”

Minoprio is enjoying fighting his old foe and fellow Match Racing World Champion against whom he has been competing regularly since his childhood. “It is always fun racing against Phil. He is a good lad and we have a good competition.”

Today four teams won races with Sébastien Schneiter’s Team Tilt claiming the opening race and Sébastien Rogues’ Team ENGIE the second. “We had a beautiful day with the ENGIE boys,” said Rogues. “We got a good start and we did a good first downwind. We are happy but it is just the first day and the competition is very hard – the teams here are at a very high level.”

Five more races are scheduled for tomorrow, when the wind is forecast to be slightly stronger than today.