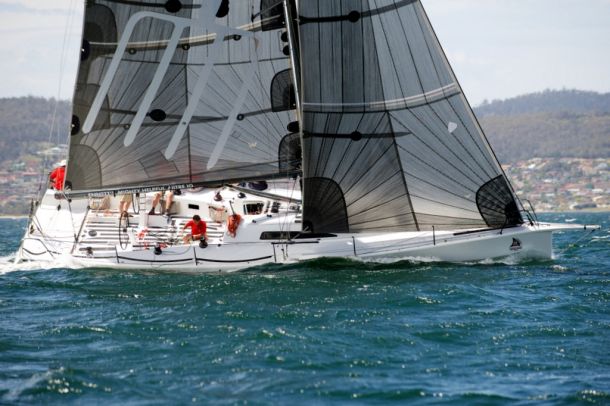 Lexus of Hobart King of the Derwent winner The Fork in the Road powering to windward. Phote Dane Lojek

Former world champion and Olympic dinghy sailor Gary Smith today added another crown to his illustrious career, steering The Fork in the Road to victory in the 2015 Lexus of Hobart King of the Derwent.

The noted Tasmanian yacht won the IRC handicap division of the spectacular round-the-buoys race giving her the coveted title of King of the Derwent to add to line or handicap honours in almost every offshore race in the State, including her fourth line honours win early this week in the National Pies Launceston to Hobart Race.

Smith recently was inducted into the Tasmanian Sporting Hall of Fame, the first yachtsman to receive this honour in more than three decades.

Derwent Sailing Squadron sailing manager Mike Denney late this afternoon confirmed The Fork in the Road as the winner of the King of the Derwent title but the announcement of other results was delayed for several hours because of an extended protest hearing between the Hobart yacht Voodoo Chile (Andrew Hunn) and the winner of the Melbourne to Hobart West Coaster race, Cartouche (Steven Fahey).

The two yachts locked masts in a port and starboard incident with the protest committee ultimately disqualifying Cartouche from the race. This confirmed Voodoo Chile’s fourth place in the IRC division.

With The Fork in the Road the winner of the King of the Derwent trophy, the other three top placed yachts in the IRC division each moved up one place, with the Victorian yacht Seduction (Richard Nichols) becoming first in the IRC division, Cougar II (Tony Lyall) second and Voodoo Chile third.

The good weather, the size of the race fleet and the spectator fleet today compensated the Derwent Sailing Squadron and the KOD sponsors, Lexus of Hobart, for the abandonment of last year’s event because of galeforce winds on the Derwent.

Today’s weather was perfect for all: a warm summer’s day with the temperature reaching 25º C and a freshening south-easterly seabreeze moving up the Derwent just as the fleet started on the three lap, windward/leeward course.

Big boats Cougar II, Tony Lyall’s TP52 Cougar II and The Fork in the Road, Gary Smith’s Bakewell-White 45 won the start and sailed above their handicap ratings to figure in the top corrected time results for the IRC division.

From a 5 knot southerly breeze at the start off the John Garrow light, the wind swung to the east and freshened to 18 knots, with line honours winner Alive, DSS member Phillip Turner’s Reichel/Pugh 66, covering the 9.6 nautical mile course in one hour and 12 minutes.

However, skipper Duncan Hine and his crew of Alive had to play catch-up after a missing a significant wind shift on the first windward leg. Among the crew was John Cameron, Commodore of the Cruising Yacht Club of Australia.

Four yachts, all locals, broke the start but all returned and re-started, losing considerable time in the light breeze/

At the first windward mark near White Rock Tony Lyall’s TP52 Cougar II led the fleet from Alive and Gary Smith’s Bakewell-White 45, The Fork in the Road, with Alive struggling in the light and variable breeze. As the fleet finished the first lap, DSS race officers signalled a change of course to the east, relaying the windward mark towards Ralph’s Bay.

As the race progressed the bigger boats took over the running with Alive overtaking Cougar II to finish a good 10 minutes ahead of Cougar II with the Fork in the Road about four minutes further astern.

The results of today’s Lexus King of the Derwent has seen the National Pies Launceston to Hobart Series go to Off-Piste, taking out all three handicap categories, IRC, AMS and PHS.