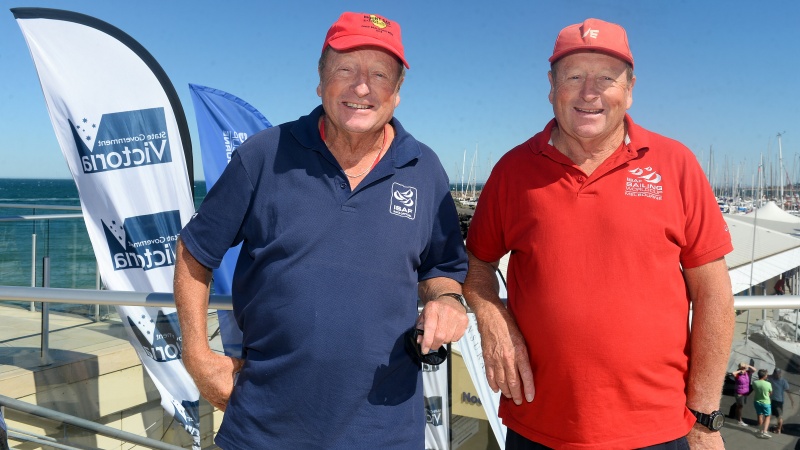 Victorian brothers Kevin and Ross Wilson have been recognised with the Kevin Wood Award for their dedication and commitment to the Sail Melbourne International Regatta.

Named after Kevin Wood, who was the event chairman and driving force when Sail Melbourne started in 1994, the Kevin Wood Award recognises the outstanding contributions to the event by volunteers and those behind the scenes. The award was presented to Kevin Wilson in absence of his brother Ross Wilson on the final day of Sail Melbourne International, on Sunday 3 December 2017 at Royal Brighton Yacht Club.

“Unfortunately Ross couldn’t be here, but we have a Wilson family reunion this weekend and he opted to go and I to stay with my favourite people down here at Sail Melbourne,” Kevin Wilson explained. “It’s been fantastic to receive the Kevin Wood Award. We started in 1994 with the first of the Sail Melbourne regattas down in Black Rock and we’ve had the event continually since then. We’ve been part of the race management team and also the race management committee since those first days and it has been a long journey, a beautiful one and we love it.”

Originally from Mildura and now members of Sandringham and Black Rock Yacht Clubs Kevin and Ross Wilson are two of the world’s most highly qualified, respected and experienced World Class Race Managers and have been part of multiple Olympic Games, Paralympic Games, Youth Olympic Games and several World Sailing events around the world as well as hundreds of National, State and Club events. With their experience and international connections they have been instrumental in promoting Sail Melbourne around the world.

“Ross and Kevin are Sail Melbourne and to many in Australia and around the world they are the face of Sail Melbourne. They have been integral from the start of the event and have ensured that the one thing that has remained consistent over the 25 years of our event is a top-level race management that is the envy of the world. This event does not happen without our volunteers and our dedicated race management and we greatly appreciate the time and efforts everyone gives to support it. Congratulations and thank you to Ross and Kevin for everything you have been and are doing for Sail Melbourne” Event Chairman Mark Klemens said in his closing words of the regatta.

“Ross and I have had the opportunity to be able and go around the world and it’s the race management team that makes these events great. We’ve been fortunate to be part of some of the major events, including Olympic Games, and it gives us an enormous amount of pleasure to participate and officiate at those events. It’s always great to see our Australian sailors at other events and to see people who have started in junior classes at Sail Melbourne excel at the top of the classes later on. We have had some special experiences and especially Sail Melbourne is very close to us and we are very passionate about it,” Kevin Wilson added about their close ties with the event.

Sail Melbourne International 2017 was a challenging week for the race committee with an unusual heavy weather front crossing Melbourne and Victoria. But with the Organising Committee’s world-class expertise in the hands of this year’s Principal Race Officer (PRO) Mark Taylor and Kevin and Ross on the Race Management Committee the event wrapped up smoothly.

“I would like to mention Mark Taylor, who has taken the role of PRO for this event and has done a fantastic job. It’s been another great Sail Melbourne and there is plenty of great sailing to come here at Royal Brighton Yacht Club over the next two years,” Kevin Wood thanked Taylor and recognising Royal Brighton Yacht Club, which will continue to be the host of Sail Melbourne over the next two years.

“It’s been great to see people like Mark Taylor step up to be an international race officer last year. This year we also had Matt Ross, who is a lot younger and got is international accreditation. We do have some great depths in race management skills around us and there are some very intelligent people coming up. Making sure that this is happening is all part of the journey, so when Ross and I take a little backward step, we’re very comfortable that the event will be in very good hands,” Kevin Wilson concluded outlining their succession planning.

Sail Melbourne International is Australia’s premier Olympic and Invited Classes Regatta, held annually in the waters of Port Phillip. This year the regatta was hosted by Royal Brighton Yacht Club with some of the world’s best sailors from Australia and around the world attending and 135 volunteers from the sailing clubs around the bay delivering the event.