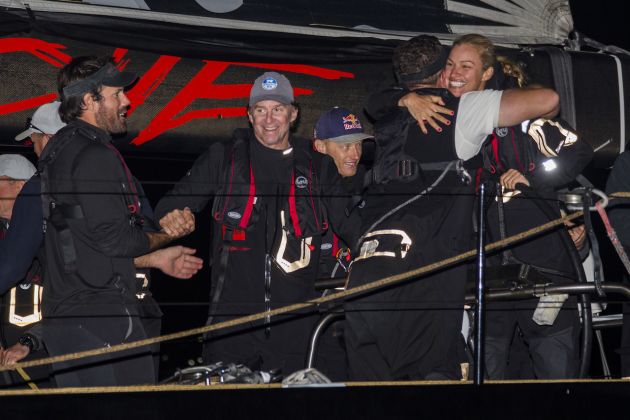 “This is a hard race. I have sailed around the world two and a half times and I thought I had seen it all but this is one hard body of water” was how Comanche’s skipper Ken Read summed it up dockside after bringing his wounded supermaxi across the line tonight.

One of the most extraordinary line-honours triumphs in the history of the Rolex Sydney Hobart.

This was a moment of supreme elation, joy and relief for Read and Comanche’s owners, Jim and Kristy Clark. Relief because Comanche could so easily not have made it to Hobart at all. It had all come so terribly unstuck on that first night of the race, when something destroyed one of their daggerboards.

They had somehow wrecked the entire steering system inside the boat, and when they finally had a chance to inspect the damaged rudder they found it facing backwards.

“That’s when we said we’re done,” Read said. “We stopped and took all the sails down. We actually started kind of drifting back towards Sydney. And then all of a sudden I see the tools come out and when I see the tools come out with these guys that’s usually a good sign that they have an idea. All of a sudden you hear cutters and little grinders.”

Somehow they patched it all together.

“There’s three stainless threads holding the entire steering system together right now,” Read adds. Maybe they would not need to pull out after all. “I talked to the watch captains and we all decided unanimously we’re here to finish this race.”

“I did not quite know what was going on,” Jim Clark said. Stuck on shore, the owner was only getting patchy news from his boat. “First I was told they retired and then that they were racing on. Until we came alongside the boat I wasn’t fully aware of exactly what had gone on. It was my first real indication of just what had happened.”

While Read’s tradies were ferreting away at the steering, Rambler swept past into the lead. It would be 13 hours before Comanche would take it back again after, bizarrely, Rambler smashed one of her daggerboards. Suddenly it was game on again.

“About half way through we put in a long port tack and chewed up Rambler,” Read says. “We went from let’s just finish to, holy crap, we might win this thing.”

And win it they did, in grand style.

Comanche had blitzed the field in the fresh nor-easter at the start, and, until losing her daggerboard and rudder, had continued to slowly increase her lead in the tough, southerly bash on the first night. But that was expected.

What was not expected was how, in today’s lighter winds, the big, wide supermaxi consistently built on her lead over Rambler and Ragamuffin 100.

“I have been hearing all the time that we couldn’t perform in light wind” Read said, “and I have been saying that we’re really different from last year. This boat is doing everything we dreamt it could do and more.

“We love this boat. It got us here safe, right?”