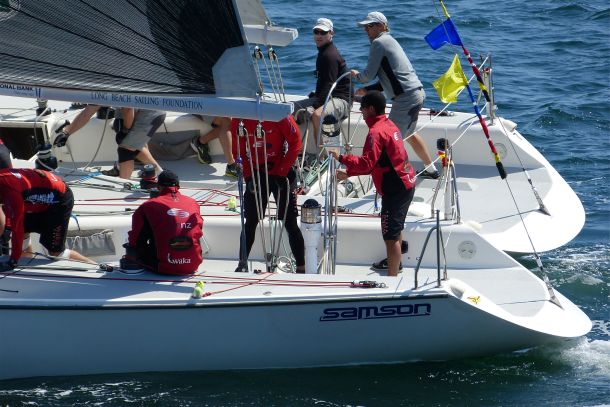 LONG BEACH, CA, USA (17th April, 2015):  An all-star line-up is taking shape for the 51st edition of the Congressional Cup (13-17 May), with Scott Dickson’s recent selection as Long Beach Yacht Club (LBYC) representative, and the announcement of the 2015 World Match Racing Tour skippers.

Dickson – this year racing in his 15th Congressional Cup – will be mixing it up with 11 other sailing greats from around the globe, including a who’s who of the world’s top-ranked skippers, as determined by the International Sailing Federation (ISAF – the yachting world’s organizing authority).

The Congressional Cup represents a half century tradition at the highest level of sailboat racing in the world, however it is a new entry to the World Match Racing Tour; joining this prestigious, 16-year-strong, global match-racing circuit as the 2015/16 season-opener.

The five day regatta, organized and hosted by LBYC, will be held May 13 to 17, 2015 in Long Beach, Calif.; preceded by three days of Ficker Cup racing to determine the final entrants.

The action – held right off the Belmont Veterans Memorial Pier, in the fair and steady breezes of Long Beach’s outer harbor – will pit each skipper and crew of five in a series of double round robins. Teams will advance over the course of the week to the semi-finals and finals, and an ultimate sudden-death finish for one fortunate winner. Races began around 11AM each day.

The Congressional Cup has been an innovator in the game of match racing since 1965, introducing on-the-water umpiring in the 1988 regatta. The event is renowned for its world-class hospitality and organization, utilizing the talents and energy of a unique volunteer force of more than 300 members of LBYC – one of the premier boating institutions in the United States since 1929. The club and associated Long Beach Sailing Foundation maintain a fleet of identical 37-foot Catalina sloops designed specifically for the event; which guarantees an even platform and exciting competition.

The winning skipper of the Congressional Cup is awarded the coveted Crimson Blazer – an honor bestowed to the top names in sailing over the years, including Ken Read, Gavin Brady, Dennis Conner, Ted Turner, Dean Barker, and more.

For more information on the LBYC Congressional Cup please go to www.thecongressionalcup.com