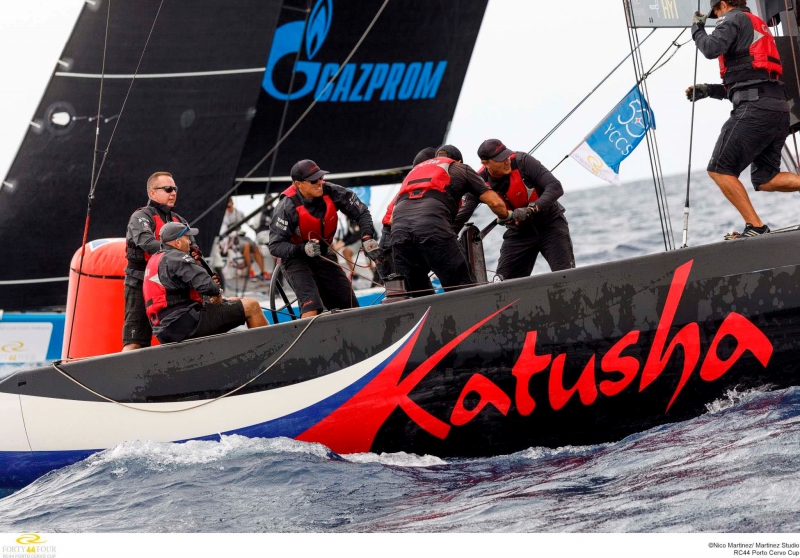 Uncertainly over the weather continued for day two of the RC44 Porto Cervo Cup, hosted by the Yacht Club Costa Smeralda and in the event, competitors used most of their sails as, after a light to moderate start, the wind kicked in close to the class' maximum limit with several significant shifts.

Courtesy of the conditions, there was plenty of excitement and many lead changes, but it also proved a high scoring day for the nine RC44s.

After today's second race, three boats were tied on points, in the lead, but they all suffered mid-fleet positions in the final race. This left Alexander Novoselov's Katusha leading at the end of the day, two points ahead of Slovenia's Igor Lah on Team CEEREF, the only boat to hold her position.

Meanwhile Peninsula Petroleum dropped to third, a further point behind, her demise the result of a penalty in todays' first race and an OCS in today's third race, both causing deep results.

Team Aqua came close to winning the first race while in the third Nico Poons' Charisma had led most of the way around but Team Aqua did a good job to round the top mark with them and rolled Poons on the final leg to take the bullet. Conversely Vladimir Prosikhin's Team Nika was second in today's two opening races but finished last in today's final race.

With big winds forecast for tomorrow afternoon the schedule will be brought forward by an hour with a first warning signal at 1100 CET.