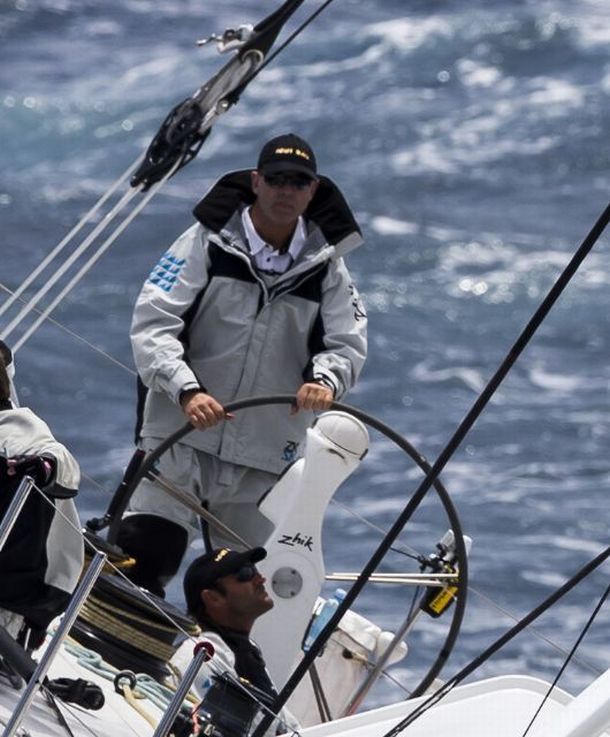 Matt Allen at the helm of Ichi Ban.Photo Yachting Australia.

This year, as in every year before, the mainstream media has concentrated totally on the front of the fleet during the Rolex Sydney Hobart. As soon as the big boats have finished and the line honours trophy has been won, they pack away their i-Pads and i-Phones and go home.

Meanwhile, back in sailing land, comments on our website and Facebook page vilify the big boat sailors and loudly proclaim that the “real” race is still going on.

In my opinion, both parties are right. Because there are many, many facets to this great race and all of them are “real”.

Like many sailors, I get angry at the portrayal of our sport as a millionaire's game. Headlines like the one in the Telegraph this year about “$100 million worth of boats heading back to Sydney” certainly don't help. But the headline probably sold some newspapers and certainly put our sport on the front page, so for that we should be grateful.

Unlike some of the haters out there, I think the big boats do a lot of good. And they are certainly a major part of the “real” Hobart.

Yes, they are steered by professional skippers like Ken Read, Mark Richards, Brad Butterworth and David Witt. Yes, the crews are all full-time sailors who make a decent living (a very decent living, in the case of Jimmy Spithill, Tom Slingsby and others) out of what others are doing for nothing, or actually paying to do.

But we shouldn't envy them their good fortune. Because in almost every case luck had nothing to do with it. It was talent combined with a hell of a lot of hard work that got them where they are today.

Let's look at the owners too. Bob Oatley has poured millions of dollars into sailing, outside of what he has spent on campaigning Wild Oats. He is a major supporter of the Australian Sailing Team and has funded other projects which have never been heavily publicised because that's not why he was doing it.

When Jim and Kristy Clark launched Comanche, Ken Read said that the boat had been built to promote the sport of sailing. And he has been true to his word because every campaign she has done has generated enormous publicity for ocean racing.

After being a major international sport in the USA (at the LA Olympics they won nine of the ten sailing medals and got silver in the other one) sailing has slipped off the radar in that country. They failed to win a single medal of any colour at London 2012 and I have even heard US sailing described as a basket case. Comanche's win in this year's Hobart will do an enormous amount for the profile of the sport there and in Canada. Combined with the rise of exciting foiling classes, kids will again be lining up at sailing clubs wanting to be part of it. And that will mean more events that you and I can participate in.

Another well-heeled sailor, Paul Clitheroe, is at time of writing sitting in the favourite's seat for handicap honours. Paul campaigned a Beneteau 45 for many years, saying he wasn't a good enough sailor to handle a TP52, but buying a big boat and paying someone to steer it would be like buying a racehorse and paying the jockey.

Paul finally decided he was good enough to step up, but his crew are still essentially amateurs who pay their own way at regattas.

My favourite Clitheroe story involves Sail Port Stephens, when I had dinner with the crew. The next day was going to be very light and I asked Paul how many crew he was going to carry. He replied that everyone had paid their own way, so everyone was going to be on board. “We'd go better with two or three less, but that's not how we do things on Balance.”

Paul Clitheroe is certainly part of the “real” Hobart.

Some of the haters made fun of Matt Allen's “first world problem” of trying to decide whether to sail his Carkeek 60 or his JV52 in this year's race. Matt is an extremely wealthy man and he likes to spend some of his wealth – all hard-earned – on ocean racing.

But we're talking about a man for whom the CYCA changed its constitution, so they could enjoy the benefit of his enormous intellect as Commodore for more than two years when they were rebuilding after the nightmare of the fatal 1998 Hobart. Matt served two terms as Commodore before becoming a director of and then President of Yachting Australia.

Currently Matt is overhauling the governance of sailing in this country, trying to cut out duplication and ensure that government funding is increased and then spent wisely. It's not a glamorous task, but Matt is doing it because it needs to be done.

Is this man who has a choice of two million dollar boats taking part in the “real” Hobart? You bet he is.

This year's Clipper Round the World Race and the 2013/14 edition both included the Sydney Hobart as a leg of the overall race.

The Clipper provides a valuable service to our sport. It offers people who have never sailed before, and ordinary club sailors, the chance to do a circumnavigation or just to cross an ocean or sail in the Sydney Hobart.

Apart from the skippers, the sailors on the 12 Clipper boats have paid a large sum of money to take part in this year's Hobart. They have been out there getting wet, cold and miserable, pounded by the same vicious seas as Wild Oats, Comanche, Wild Rose, Balance and all the production boats.

Are they taking part in the “real” Sydney Hobart even though they have paid for the privilege? You bet they are.

There is a perception that you aren't a real sailor unless you endure five days of sometimes absolute hell in a tiny boat that cost less than $100,000. That's nonsense. Yes, I have enormous admiration for the people in the little boats, the crews often made up of family and friends.

It's one of the reasons why Mysailing and Australian Sailing stay till the end and give the same coverage to the last boats as we did to the first. The Tony Cables of the world, doing the race 25 to 50 times, deserve the utmost respect and admiration, even if, as Ken Read suggested, they may be a little mad to do so.

The little boats are every bit as important as the big ones. They deserve much more publicity than they get. But they are no more “real” than Comanche, Wild Oats, Ichi Ban, Balance, Da Nang Viet Nam or Rambler 88.

I believe that the appeal of the Sydney Hobart is that it does offer something for everyone. There is the battle of the billionaires; a chance for corporate giants to get out of the boardroom and on to the water; the opportunity for people who have never sailed before in their lives to pay to experience the race first-hand; and a very real place for people with boats worth less than $50,000 to gather some family and friends and take on the elements. They all have a chance to win it, but more importantly they all have a chance to take part.

So please, no more of this “real Hobart” nonsense. Everyone who takes part, whether they are paid, paying or strictly amateur, deserves credit for taking on the toughest offshore race in the world.