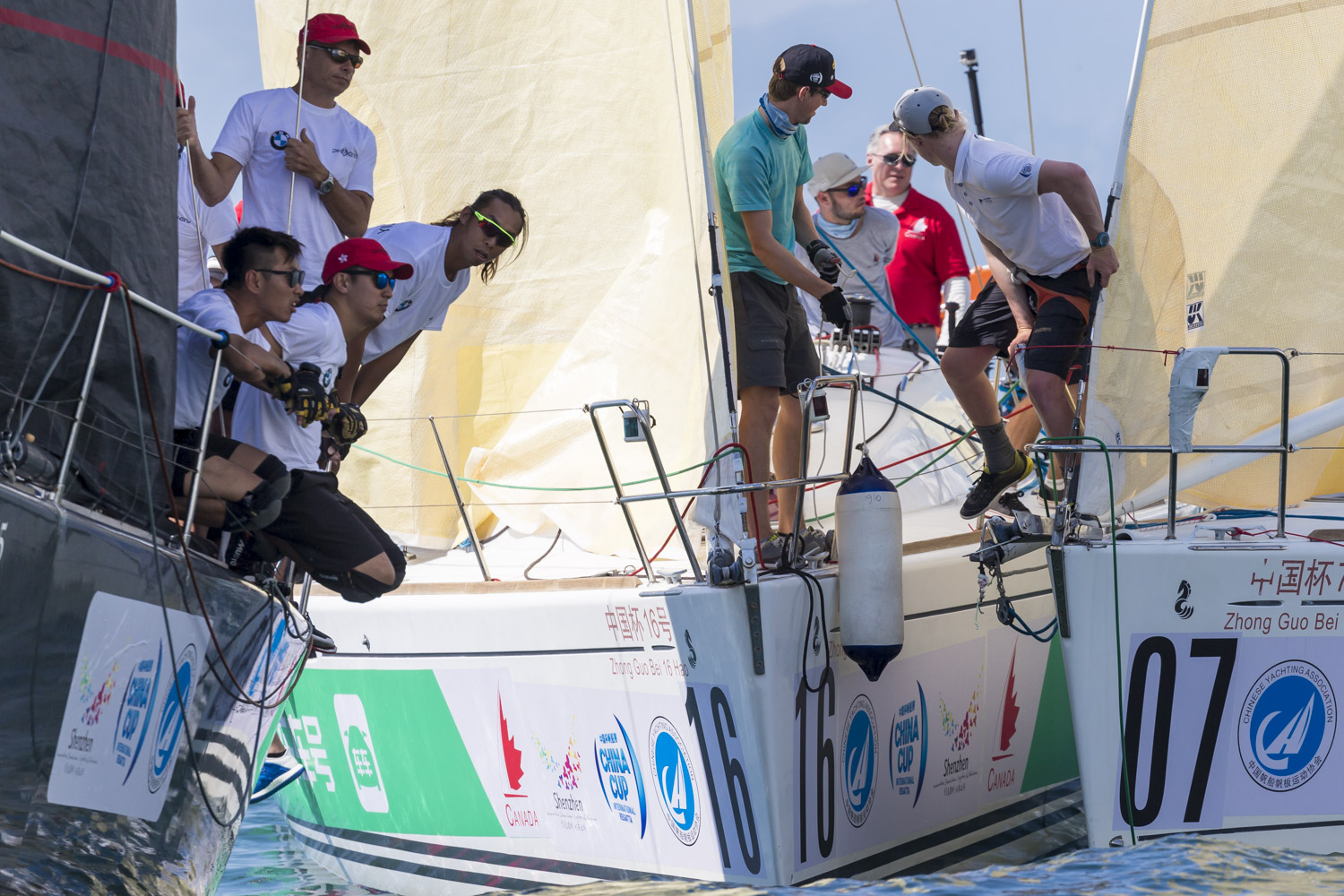 Vanhang Longcheer made sense of a difficult day to move into the lead of the Beneteau 40.7 fleet at the China Cup International Regatta – the defending champion skippered by Joseph Dennis O’Keeffe, was the most consistent on a day when the wind was light and often quite fickle.

In the second race of the day, the bottom of the run proved a massive turning point for a number of teams, and it worked out perfectly for George Anyon, skipper of AMG Mercedes AMG.

“Everyone parked up in front of us in no wind at the leeward mark,” said the young New Zealander, “but there was a small gap between the mark and the boats; we stuck it through the gap, trucked straight through, got the new breeze and managed to carry the momentum for the rest of the race.”

AMG sailed from eighth to first with that move, while Yiihua Pocket Emirates Team New Zealand was one of the losers, dropping from fourth back to 11th in the leeward-mark shake-up.

Josh Junior, who’s steering the Team New Zealand boat this week, is still enjoying himself even when the going gets tough.

“We won the first race and then we lost out big time in the next one at that turning mark, but it’s still very good fun,” said Junior, who was part of the winning crew in the America’s Cup earlier this year. “Compared with flying at 45 knots in the America’s Cup boats, well, it’s nothing like that because we’re only doing 5 knots through the water. But tactically it’s very challenging and there’s plenty going on.”

Anyon said the key is to keep the speed on at all costs. “These boats are really hard to sail well and keep moving. It’s super challenging. You can't just come out of a tack, pull the sails on and go. You're going top speed at 5 knots and building for a whole minute out of a tack before you get back up to speed.”

So while AMG Mercedes and the New Zealanders won a race apiece, it’s Longcheer that holds the lead with Cheung Kong Sailing Team in second place. The South Africans on My Side, after winning the passage race the previous day, suffered on the windward-leeward race track – with scores of 10, 13 dropping them to fifth overall.

In IRC Division A, Frank Pong is racing for victory, but was hampered in the first race when a sticker came unstuck from the side of a rival boat, fell in the water and caught around the keel of his 75-footer Jelik.

The dastardly sticker wouldn’t come unstuck for the whole of the race. Jelik finished fifth but, after a gap between racing and an opportunity for one of the crew to dive down and free the sticker, Pong’s boat was back on song, winning the next race and moving to second overall behind Standard Insurance Centennial Sailing Team.

The most dominant boat in the regatta across all 11 racing divisions is Shenzhen SeaWolf, with Yan Yuye and his team scoring a perfect three wins from three races so far.

Sailors travel from far and wide to compete at the China Cup and many are back year after year. In 2016, Ali Al Balushi and his team mates on Oman Sail finished third in the FarEast 28R keelboats.

“Two days to go and you’re never finished until it's finished,” said Al Balushi, proud to represent his nation with an all-Omani crew. “We like this place, very nice people like in Oman. We have a good history between Oman and China. Last year we were third and this time we're here to win.”

It was a slow day for the M32s competing on their own race course near the shore in Match Cup China, the World Championship finals for the World Match Racing Tour. The Super 16 knock-out round has yet to be decided so there is plenty of racing to be completed with just two days remaining.

Aside from the racing, there is pleny of partying going on in the evenings, with sailors gathering both at the spectacular new Lavenna Hotel which overlooks the racing area, and the Shenzhen Marriott Hotel Golden Bay which hosted the lavish prizegiving tonight.

On Saturday, inshore racing continues, with a weather forecast of more light winds.