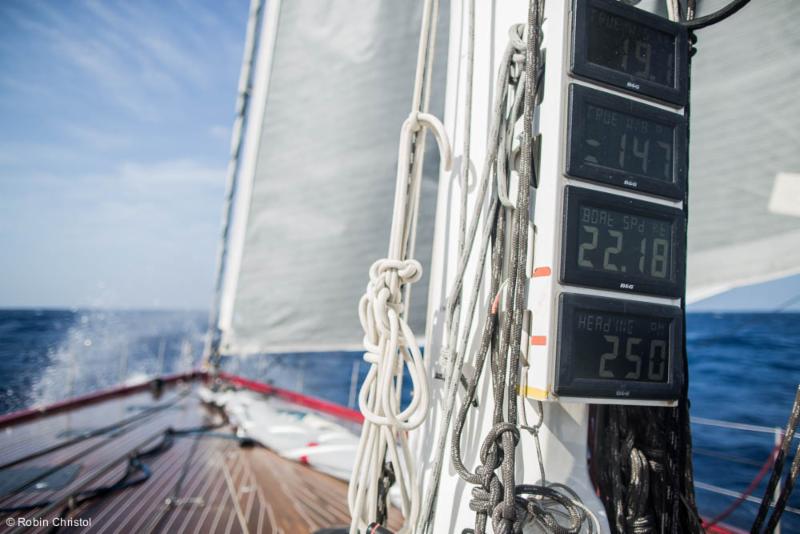 Day six of the RORC Transatlantic Race, and Phaedo3 and Concise 10/Ms Barbados are expected to finish the race tomorrow. Nomad IV leads the charge of the Maxis. Tales II makes up for lost time and Zed 6 finally heads south.

The two MOD 70s lit the after-burners on yesterday, scorching through the Atlantic with an incredible straight-line speed in excess of 30 knots. Lloyd Thornburg's Phaedo3, co-skippered by Brian Thompson and Tony Lawson's Concise10/Ms Barbados are due to finish the RORC Transatlantic Race on Friday 4th December at around midday local time in Camper & Nicholsons Port Louis Marina.

Before the MOD70s reach the finish, the island of Barbados is probably the last tactical obstacle to negotiate. As Concise 10's Caribbean home, be prepared for something different from the team currently trailing Phaedo3 by barely three hours after six days of ballistic racing.

Phaedo3 co-skipper, Brian Thompson sent back this message by satellite, painting the scene on board: “The pirates on Phaedo3 are still being relentlessly pursued by the British Navy (Concise 10 is both British and blue!)…We are just out of cannon shot, but any slip up in our sail handling and we will be seeing the might of our blue pursuers…They are surely pushing as hard to catch us, as we are to stay ahead of them. Every schedule is showing 28, 29 or 30 knots of speed. We are not holding back at all. Carving our way through the waves like a skier through a mogul field; following the liquid terrain to harmonize boat speed; heel angle and apparent wind angle to keep our speed constant through the ever-changing waterscape in front of our 3 bows. Trying not to fly the main hull or stuff the bows and generally doing the former will precipitate the latter.

“Everyone is driving fantastically and Henry has taken on the mantle of a young Padawan, learning to be a Jedi of downwind sailing. I have to be the Jedi master in a Musto cassock… It's the ideal training ground for a young Padawan – 2,000 miles of downwind blasting. Last night, despite saving several flying fish from the net, one came hurtling at me from the bow, closing speed about 40 knots and got me full on the Adam's apple. Lucky it was a small one. Still…put him back in the sea – a learner flyer clearly, just an accident…Anyway, time for a nap and another good shaking in the bunk.”

“We are now sailing in the tradewinds and we hope they will be the hardest possible to warp the 56 tons of Nomad IV. Our purpose is to get Line Honours ,but everything remains to be done, first of all to finish. On the operating side, it is not that easy; we are sailing with 1,400 m² of sails. Life onboard is now easier, less heeling and more sun. We are all satisfied with the ambience on board. Bises” (kisses) to our families and fair wind to our competitors!”

Yesterday afternoon, Gonzalo Botin's Spanish Tales II passed Mike Gascoyne's British Silvi Belle 2 to lead the Class40s. Tales II made the recovery from a 12 hour pit-stop in Tenerife and no doubt the Spanish team will have been in buoyant mood as they took up the running and opened up a 30 mile lead by noon on Day 6.

Just after sunset after five days and night of racing to the north west, Gerald Bibot & Michel Kleinjans Belgian catamaran, Zed 6 made a big move south. The Belgian team are in big breeze and heading towards Grenada at over 14 knots of boat speed. Zed 6's brutal northerly route seems to have paid off in spades. Gerald Bibot believes that the Class 40s are a good comparison to Zed 6, so a lead on Tales II to the finish of 287 miles is evidence that the northerly route has paid off in the RORC Transatlantic Race.