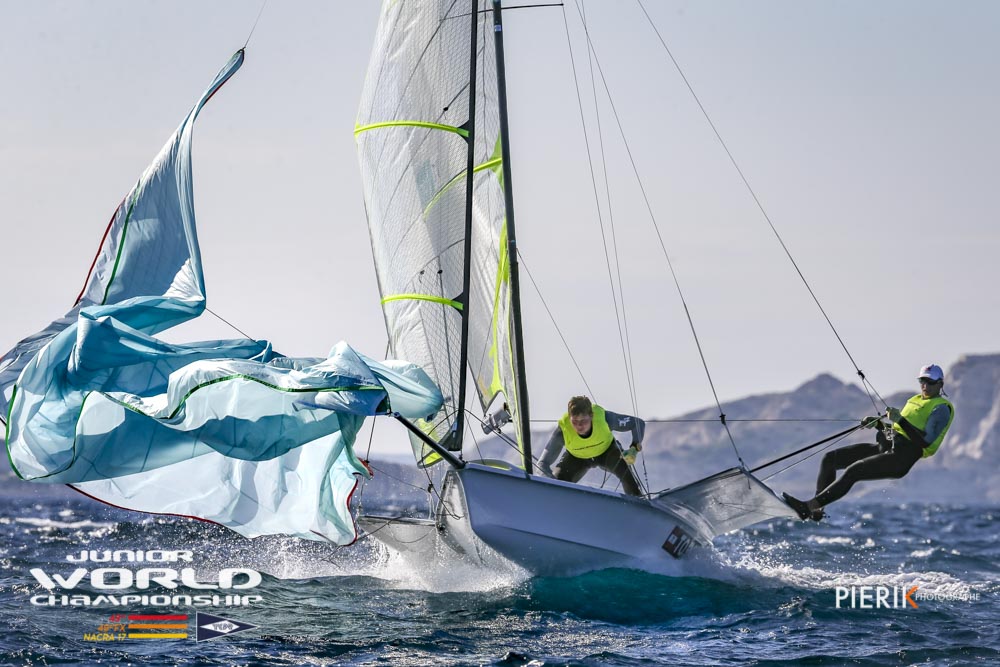 Today was another fierce test for the 49erFX and 49er Gold fleets which were first up on the schedule. With the mistral forecast, everyone knew the tough conditions were coming; it was just a matter of when.

One race was completed in tough conditions, but then the second race had to be abandoned when the only boats not to capsize in the race were those that didn’t hoist their spinnakers or do gybes on the downwind… everyone else was swimming!

Daniel Nyborg/Sebastian Wright Olsen (DEN) came to shore tied with Bart Lambriex/Scipio Houtman (NED) after seven races, with the Danes holding the tie break advantage due to their race wins.

“The two of them are just a bit ahead of the rest of us right now. They’ve won most of the races and are better able to catch up when they’ve fallen behind,” said Sean Wadilove, the Irish crew in 4th overall.

After a five hour wait on shore for the breeze to moderate, the 49er Gold fleet headed back out to sea for a 4 boat showdown between the Danes and Dutch who were tied at the top and the Irish and Germans each five points behind.

In the first race The Danes, Germans, and Dutch were all in the first row headed left while the Irish started on port and headed for the shore.

Those headed out left were looking fine when they tacked back, but as the fleet inshore emerged the got a great gust and shift and pulled decidedly ahead. The Irish won their side and made no mistakes, pulling into a lead they would extend through the finish.

The rest of the action was at the top mark, where the Dutch pulled a super high mode escape around the windward mark to hold off a chasing bunch, and held their way from there grabbing a sixth place finish.

The Danes, Nyborg and Olsen, came charging around, but couldn’t pull off their bear away and did a nose over capsize, half pitchpole, half capsize that took them an age to right and they could only recover into a 19th. The Germans, Stingele and Scheel, were mid pack the whole way around and ended up 10th.

At the final start, the Dutch looked like they were poised to do a port tack option start, ducking the fleet behind on port to hit the right side. With 30 seconds to go they tacked back and took a regular start, easily winning the vacant pin end and heading offshore.

Meanwhile, the Irish did start on port at the boat, but didn’t pull it off very well. Additionally, those that started on starboard and then tacked right ended up grabbing two little shifts, and that whole pack beat out the Irish. By the time the fleet got to the windward mark our two leaders were dragging up the back of the pack, each in the teens.

It was chaos at the top mark rounding, however, with four boats capsizing on the set. Both the Dutch and Irish progressed through the fleet, with the Dutch into fifth and the Irish into ninth by the second windward mark. Like in the first race, the Dutch tried to make a very tight layline into the final windward mark, but touched it, requiring them to do a 360.

The Irish made one pass on the downwind to finish in 7th, while the Dutch limped through in 11th place. As things sit the Irish take that 4 point advantage into the final day, and if the forecast holds it could mark their winning of the Junior World Title!

In the 49erFX
Vilma Bobeck with Malin Tengstrom (SWE) still lead and had a very solid day with a 3 and a 7. Their lead in the women’s division was shrunk a small bit by Ronja Grongblum with Sara Ehrnrooth (FIN) who scored a 5, 1 and were absolutely thrilled to take the bullet in the final race of the day, and likely the regatta.

“It was so much fun out there. We were right on the limit for the whole race, but made it around and stayed in front,” said Ehrnrooth, still exhilarated from the mornings racing.

The RC spent little time holding the 49erFX fleet on shore, cancelling them for the day by 13:00 with sustained high winds forecast and 3 other fleets ahead of them to sail next.

In the open division Keanu Prettner with Niklas Haberl (AUT) continue to thrive in the breeze grabbing a 2, 2 on the day to sit 10 points ahead on the overall leaderboard.

In the Nacra 17
The Nacra 17 fleet never got off the beach today, with a 4pm cancellation. Therefore there is no change to the standings from yesterday.

Gianluigi Ugolini and Maria Giubilie (ITA) have taken 5 of 6 wins so far and look poised to claim the title. They would do so and bring yet more glory to Italy whose Tita and Banti have won both the Europeans and Worlds this year. Winning all three major class titles by a single country is quite a feat!

Forecast
There's a chance racing is over for the championship. Saturday is the final day of racing, and the forecast is for the Mistral to build overnight and hold all day Saturday.

We're all hoping it will blow itself out or shift in angle so it partly avoids the bay Marseille is part of in the big picture so more racing is possible.