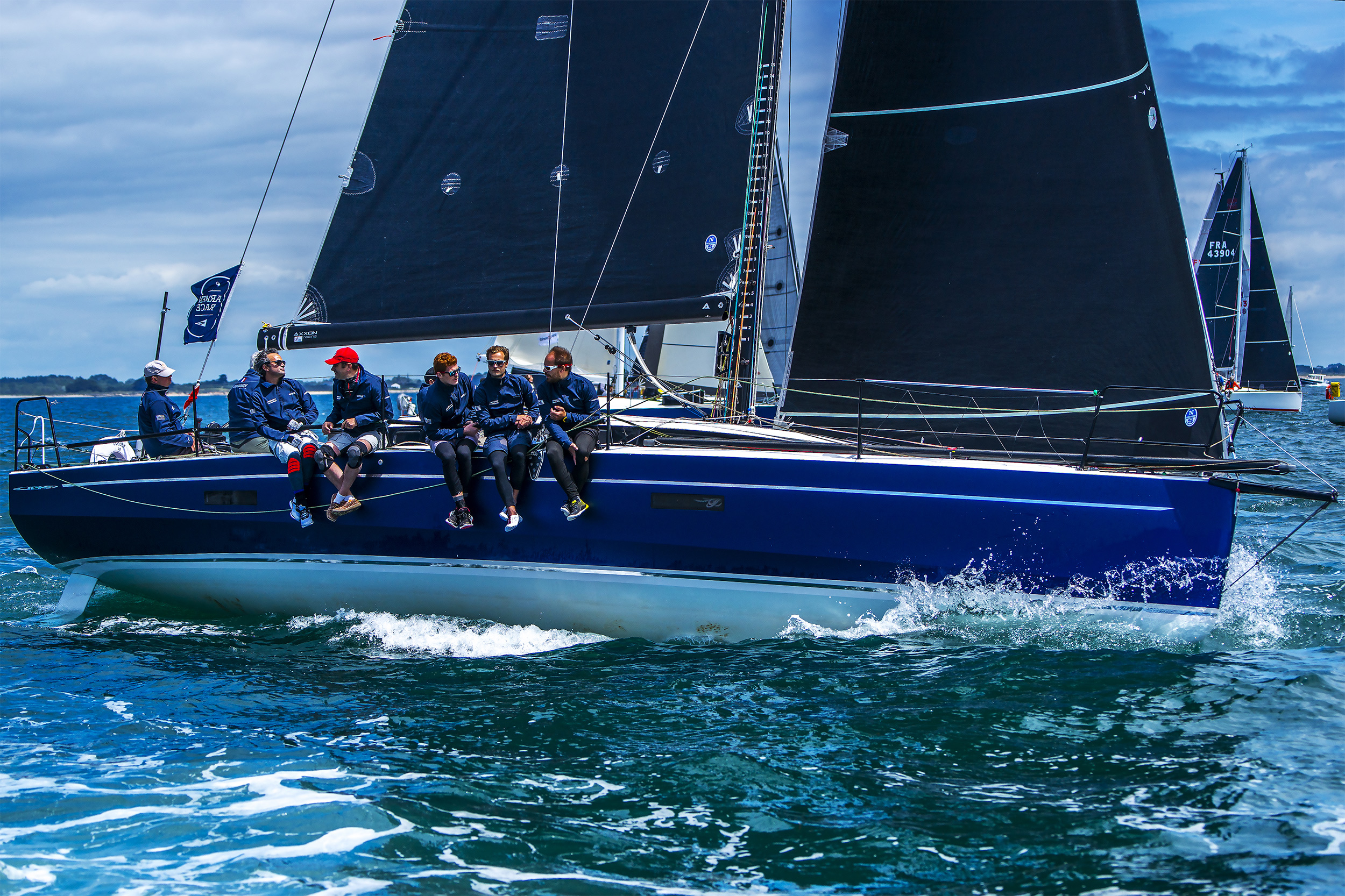 In 2013, France’s Pascal and Alexis Loison, made history when they became the first double-handed crew to win the Rolex Fastnet Race overall on IRC aboard the JPK 10.10 (10m/32ft) Night and Day.

Four of the top five yachts in the 2015 Fastnet Race were JPKs. And in the most recent event in 2021 another JPK stole the show – Thomas Kneen’s fully-crewed JPK 11.80 (11.80m/38.7ft) Sunrise, competing for Great Britain had a convincing overall win on IRC.

JPK yachts are hugely popular in Europe, yet there are hardly any down under. But this is all about to change with the arrival of JPK Pacific.

I talked to JPK Pacific Directors Paul Glynn and Mattijs Willenborg about why they’re so passionate about the JPK brand, and how they formed a partnership with Mark Rowed from Innovation Composites to breathe life back into production yacht manufacturing in Australia.

While wandering around the dock at the Cruising Yacht Club of Australia in Rushcutters Bay, Sydney, days before the 2015 Rolex Sydney Hobart Yacht Race, Paul Glynn and Mattijs Willenborg first set eyes on a yacht that would launch them headlong into a passion project.

Glynn was curious and approached the crew onboard. “There was this guy hanging over this strange looking boat. I asked, ‘What boat is that?’ and he said, ‘Mon Chéri, it’s a JPK’.”

Glynn and Willenborg then introduced themselves to the other French crew, including Jean Pierre Kelbert, founder and director of JPK Composites.

That year the JPK 10.80 (10.8m/35.5ft) they had admired, Courrier Leon, had a successful Sydney Hobart in challenging sailing conditions.

“I followed the 2015 race,” Glynn said. “I called Matt [Willenborg] and said, ‘Have a look at Courrier Leon, it’s up there in the lead [on IRC]’. They had a nine-hour lead initially, but the River Derwent properly shut down for them.”

Courrier Leon finished second overall to Paul Clitheroe’s Farr TP52 Balance. Even though it didn’t get the win, Glynn and Willenborg were impressed — this 35ft yacht gave the big dogs a run for their money for most of the race on IRC.

Glynn and Willenborg did their research and noted that the impressive result in the Sydney Hobart wasn’t a one-off performance for a JPK yacht. JPKs had been producing great results in Europe for some time. The pair decided they wanted a piece of the action.

Last July, almost five years after that fateful day on the marina at the CYCA, Glynn and Willenborg received the go-ahead from the NSW government to manufacture JPKs in Australia through JPK Pacific.

The two self-confessed sailing tragics have big dreams as the directors of the business in Australia. They come to their roles with strong sailing backgrounds.

Glynn sailed for most of his life, and completed more than a dozen Sydney Hobarts. Willenborg started sailing more often after he made the move from his home country, the Netherlands, to Sydney. He and Glynn sailed together on Glynn’s Davidson 34 Monkey Business.

They then went on to compete in the 75th Sydney Hobart in 2019 aboard Willenborg’s Sydney 40 Business as Usual, Glynn as skipper and Willenborg as tactician. The pair are experienced club sailors, which is one of the reasons they found JPK yachts so appealing.

“We were mesmerised by JPK,” Glynn said. “And we had a look at what’s happening here [Australia] in the mid-fleet. The TP52s have got hold of the neck of sailing, and everyone thinks that unless you’ve got a TP52, which is basically right, you can’t win anything.”

He loves JPKs because they’re “fun and competitive” but they’ve also got grunt with an enticing price tag.

“JPK gives a mid-fleet sailor, a bloke like me who’s just a club sailor, an opportunity to get on the podium.”

Initially, their plan was to start an agency where they would sell JPK Composite yachts to a local market. But that idea soon morphed into building JPKs in Australia when Kelbert informed them that he and his team were struggling to keep up with the high demand for the product at JPK Composite headquarters in France.

Willenborg explained: “[Kelbert] said, ‘I can’t build enough myself, so if you want to sell any you’ve got to find a way to build them’.”

Enter the Nowra-based Innovation Composites. The company specialises in marine and automotive manufacturing and repairs. Its owner is Mark Rowed, who was the factory manager for the hugely successful Sydney Yachts.

The JPK Pacific team are thrilled to have the calibre of someone like Rowed on board to reignite the manufacturing of production-line boats in Australia. They also hold the licence to sell JPK Pacific yachts to the Asia Pacific region, which includes New Zealand, Thailand, Japan, Singapore and Malaysia.

“He’s done the research to know how damn good these boats are. [Rowed] had to come up with a formula so he could build the boats for a competitive price here in Australia, and to re-stablish an Australian boat building industry.”

Once Rowed signed up, Glynn and Willenborg approached the NSW government with their business plan that shone a light on the myriad of benefits that this ‘Made in Australia’ production boat would deliver to the Shoalhaven region on the South Coast of NSW.

The government listened, keen to boost the economy of the Shoalhaven which has endured a number of blows over the last few years, including the 2019/20 bushfires and Covid-19.

After months of negotiations, and enough paperwork to “fill the Mitchell Library”, JPK Pacific received a government grant to kickstart the manufacturing of the yachts in Australia. Initially the business will bring at least nine jobs to the region, with potential for more as demand grows.

“We’re building [the 11.80] exactly in line with what JPK Composites do with their mould,” Willenborg said.

If all goes to plan, the first 11.80 should be ready in time for the Rolex Sydney Hobart Yacht Race 2022.

JPKs are suitable for both crewed and short-handed divisions. Design adjustments can be tailored to a buyer’s needs (eg: water ballast for two-handed sailors). Glynn also praised the yacht’s suitability for family outings.

“They are finished beautifully; the finished product is really very much accessible to having the family on board,” he said.

Innovation Composites will initially solely build 11.80s, with the opportunity to build more of the JPK range down the track.

The JPK Pacific team have been humbled by the positive feedback from local sailors who are impressed by the ‘Made in Australia’ factor.

A string of other benefits comes with tag-line, including no international shipping delays and local support for owners.

“Owners can get on the phone and talk to Mark [Rowed],” Glynn said. “Whether the owner is in Asia or in Australia, they are closer to the point of delivery or manufacture.”

It’s been a long and, at times, challenging process for Willenborg and Glynn, but they are stoked to have the business up and running, and look forward to eventually adding their very own JPK to the mix.

Willenborg said: “Once we get that middle fleet to grow, it becomes so much more accessible for so many people.”

Glynn agreed and added: “We’ve walked through glass over the last few years, but with the absolute conviction of the product.