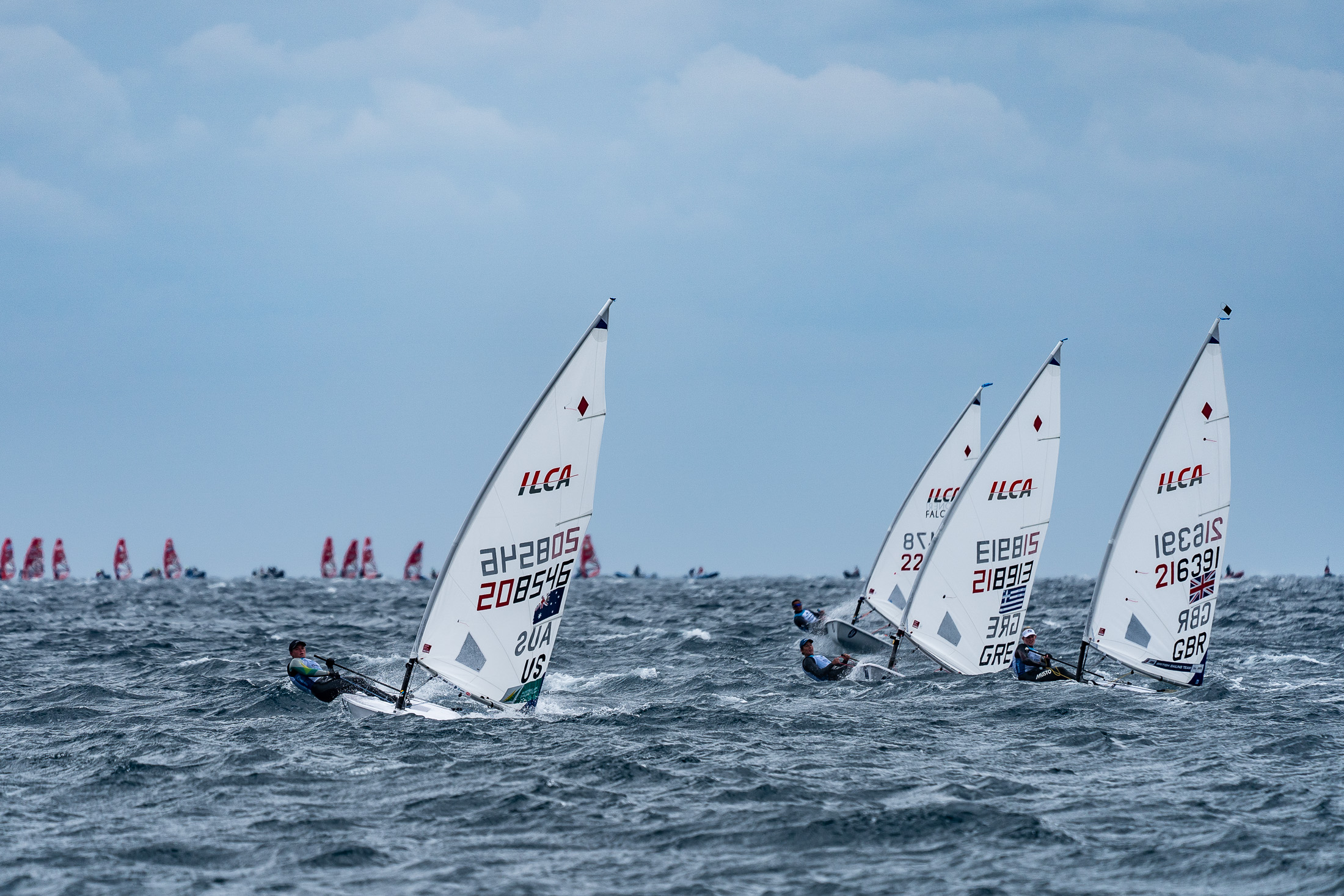 Nia Jerwood and Conor Nicholas mastered the tough conditions best of the Australians in Palma, Mallorca on the opening day of the Princess Sofia Trophy, winning the opening race and scoring fifth in the second to be placed third overall in the new Olympic 470 Mixed class.

To their credit, Jerwood and Nicholas have only been sailing together for four months but handled the 18 gusting to 30 knot winds in freezing 10-degree centigrade conditions well.

With the wind already piping in early before racing, Jerwood, from Fremantle in Western Australia, said, “It was a big day. A windy one and cold with a short delay before we started. Before we raced, and between races, we put jackets on to keep warm. We kept talking to each other to avoid feeling numb from the cold.”

Jerwood, who finished 16th in the 470 Women’s at the Tokyo Games, said, “Conor and I had some pretty clear goals going into the day, but in the end, we just wanted to keep the boat upright. It was pretty fun.

“We are a relatively new team, so it was good to see where we stand in the international fleet early on. We’re very happy, so we’re going for dinner to celebrate our first win as a pair at an international regatta.”

In the ILCA 6 (former Laser Radial) Mara Stransky is the best placed of the Australians in ninth place, with just one race sailed. The Queenslander made her Olympic Games debut in Tokyo where she finished 14th and is dedicated to making the Australian team for Paris 2024.

“It was super windy, around 20-25 knots. We were out there for so long waiting – around two and a half hours I was assured – but it felt more like four hours, because it was freezing. We couldn’t believe we were about to start until we actually started. While we waited, we were all just trying to stay warm.

Once racing was underway, Stransky explained: “I was second at the top mark but had a few loose moments and capsized. I was happy to stay up there and have a keeper in the first race. The first race always sets the tone.”

Stransky continued, “I’m super glad we went to Europe for Europeans and Worlds after the Tokyo Games, because it’s a big wake up call to be racing in a big international fleet again.”

In the ILCA 7 (former Laser) Ethan McAullay topped the Australian results. The West Australian is in 11th place overall, having scored excellent third and ninth places.

It was a disastrous day for Tokyo Olympic gold medallist, Matt Wearn OAM, when breakages marred his performance, starting with an uncharacteristic DNC in Race 1 and ending with a 26th in Race 2.

A disappointed Wearn explained, “It was quite a windy day, gusting to 30 knots. My outhaul broke in the first race, which ties your hands a bit. I spent the majority of that race and the early part of the second race fixing it, then the bailer broke. It was not a good day for me. I’ll go out again tomorrow. Anything is possible from here.”

Grae Morris is making his international debut in the iQFOiL, which is debuting as an Olympic class here in Palma. He finished the day in 26th place in the Men after four races, with a best result of eighth in Race 4.

“It’s pretty cold here,” admitted Morris, who is from Woollahra Sailing Club in Sydney. “This is my first time overseas and my first international regatta, but I’m pretty much treating it like any other regatta, just doing my best.

“I made a few silly mistakes, so will learn from them and come back tomorrow. It was pretty insane today. We did around 28 knots of speed. We usually go faster but conditions were too out of control.”

The Olympic classes regatta continues tomorrow (Tuesday local time), when the 49er, 49erFX, Nacra 17 and Formula Kite Men and Women begin their competition. The regatta ends on Saturday 9 April with the Finals and Medal Races.