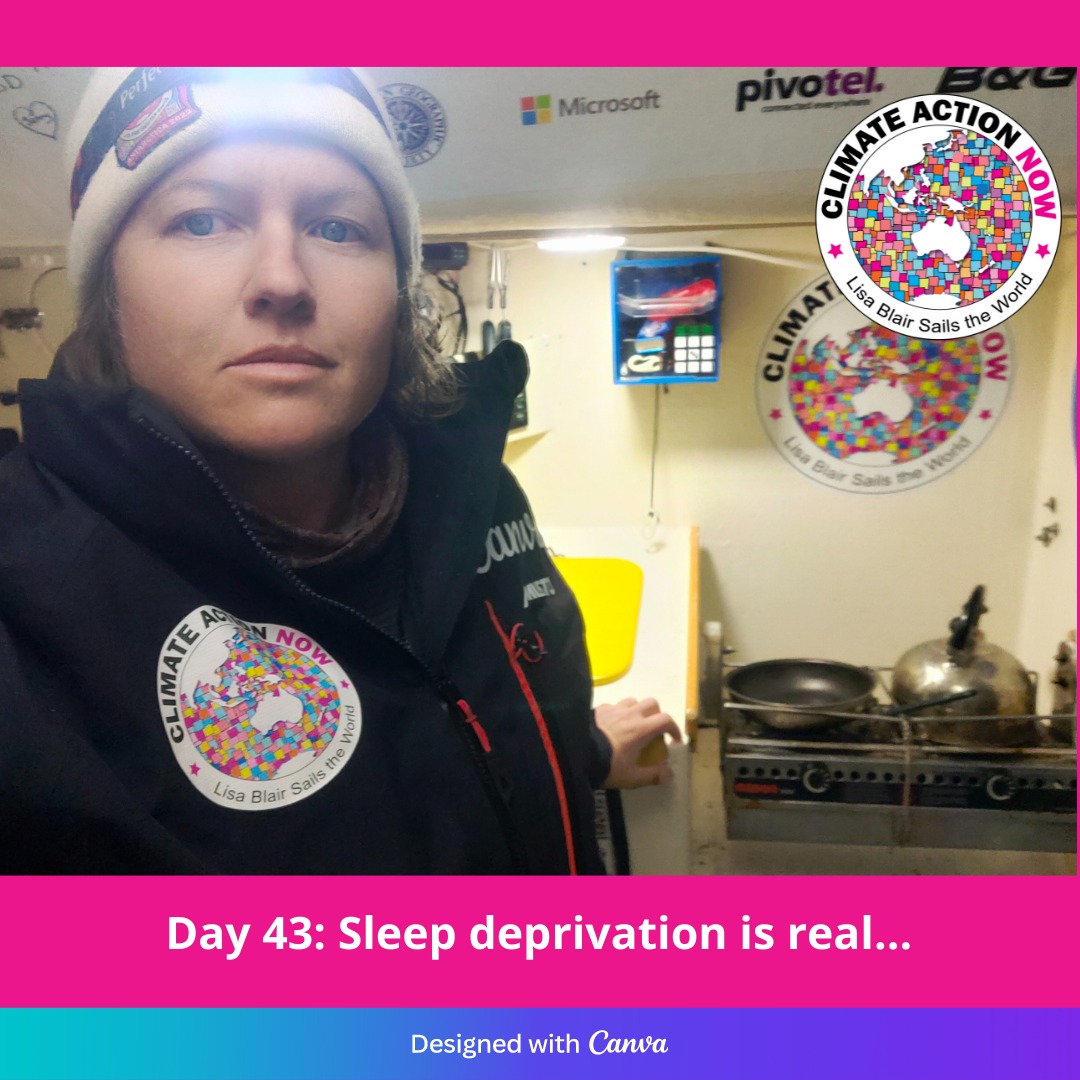 In her latest blog post, a major electrical issue keeps Blair out of her bunk for a lot longer than expected.

Well today was a little of what I like to call a ‘bad day in the office’.

I was feeling rather proud of myself, when I managed to get to bed while the sun was still down at 5am, all snuggled into my sleeping bag with my hot water bottle and ready for a lovely warm sleep.  I was really looking forward to it as I have been feeling like I am quite sleep deprived right now. I have not a lot of rest over this last week with alarms tripping or knockdowns occurring, and I was making an effort to sleep bank ahead of rounding Cape Horn.

As soon as I get a little closer to land, I will need to revert back to 20-minute micro sleeps, because I will be in a potentially high traffic area. Not every vessel is going to be able to be seen via the AIS (Automatic Identifying System) and if they are fiberglass, or a wooden boat, then I won’t see them on the radar. The only way to be safe, is to keep a good lookout. This means, not a whole lot of sleep.

So, not even an hour into my sleep and suddenly a bunch of alarms go off. When I look at my instruments, it is a full system failure, Ahhhh, I don’t have any instruments.  Somehow, I managed to lose power to all of it, including my Auto pilot.  We were rounding up in a gust of 40 knots and it had just started to hail outside. We were also sailing in a lovely large eight-metre swell and rolling around all over the place.

It was a struggle to get my zipper of the sleeping bag undone and dive half out the hatch where I could engage the secondary system.  Not 10 minutes later, I hear another set of alarms and my redundancy system loses its inputs. The auto pilot shut off, sending us through a crash gybe.

In 40 knots of wind, I climb out the hatch and onto the deck only wearing my thermal base layers, boots, vest and lifejacket on the five-degree day. I rush to take the helm.  I manage to right the boat after a few tries and settle us upwind where she won’t really go anywhere while I rebooted up system two.

I managed to get my redundancy system operating, now to find a solution for my main system.  No matter what I tried nothing was happening. I was officially flying blind.  I was exhausted before I went to bed, and now, I was really tired and super grumpy as I tried what I could to get the system back online.  Nothing.

I really lost it when we banked hard to port and then really hard to starboard and I had my head in a little hole in the wall behind the navigation station. I was trying to use the voltmeter on something and all the rocking just slammed me from side to side…..hard.  I couldn’t really brace, and then I could hear a crash and bang from the galley area followed by a waterfall of little items flying free.

I scrambled out of my little locker and went to the galley to find that the electronics spares box, that I had left sitting wedged on the seat, had been tossed free and onto the floor of the boat. All the tiny connectors and joiners that I have, to wire up new things, had gone flying around the cabin, as I had forgotten to latch the lid after removing the voltmeter.

I stared at the mess. I didn’t know if I should be crying or screaming, so I managed to do a little bit of both. I had a full hissy fit, and yes, I do believe I punched the boat. I then crumpled into a heap on the floor and sobbed.

I am tired. Like really tired. When I get this sleep deprived, I struggle to control my emotions. Little things like a rope catching, or the electrical box going flying everywhere, can be the straw that breaks the camel’s back.

After a few minutes of self-indulgence, some deep calming breaths, I scrubbed the tears from my face and set about trying to get all the little bits out of the bilge.  A while later and I was back in the wall behind the navigation station trying to wedge my voltmeter in to get a reading and trying really hard not to sob again.

It was more than anything, the fact that electronics is my biggest weakness knowledge wise on a boat.  I really needed help.  I was super conscious of the fact that Cape Horn is a little over 300 nm away and there will be lots of traffic, and potentially hard conditions.  I really didn’t want to still be fixing this issue when I was around boats, so as rough as the conditions were today, I needed to persevere.

When Australia woke up, I was able to phone a friend, Ray, at Southern Seas Marine. Using a series of SMS he was able to walk me through a variety of trouble shooting options, until we finally found that it was a little component in the system had died. This was corrupting the whole system.

After rolling around for the day in the eight metre swell or four story building waves, squalls, violent squalls bringing 45 knots of wind and sheeting hail, we managed to get the whole system back online, just after dark. Just in time for me to change a micro plastic sample over before making some dinner.

I decided that I needed a pick-me-up after that day, so I made one of my favourite dinners. It is a breakfast dish of scrambled tofu. I added black beans, and loaded up a wrap that I toast with cheese and OMG it is delicious.

I also moved the clocks forward two hours, so now I am operating on UTC-5 time zone.  The winds have been lulling occasionally down to 18 knots but then 10 minutes later will be back at 45 knots with the next squall.

I am just going to wear the slow speeds in the lulls, as I need to keep the three reefs in the mainsail and the storm jib up for those squalls.  Oh, and we broke another wind generator blade today during a big knockdown, you know, just to add to the icing on the cake.

I am feeling mildly better after dinner and looking forward to tomorrow being a better day. They can’t all be good days out here.  Today confirms that I really need to prioritise sleep over the next 36 hours before hitting that 20-minute watch cycle.

And so with that I will leave you all, but before I go I would like to take a moment to thank the following degree sponsors.

081 West – Plankowner Brewing – Huge thank you to Shaun Waggoner and your team for your support of my project, I really appreciate it.

080 West – Dawn Newman- Thank you Dawn for being a long term supporter and I am very happy to hear that Zonta International now have a statement on Climate Change.  Thanks Dawn from the Perth Zonta Club.

079 West – Philip, Elyse and Dohna in dedication to the Crew of “The Las Balsas Expedition” 1973 – Thank you so much for your support, you are always stepping up time and time again to support my projects and I really appreciate it.

And now that warm bunk is definitely waiting for me so goodnight, all.