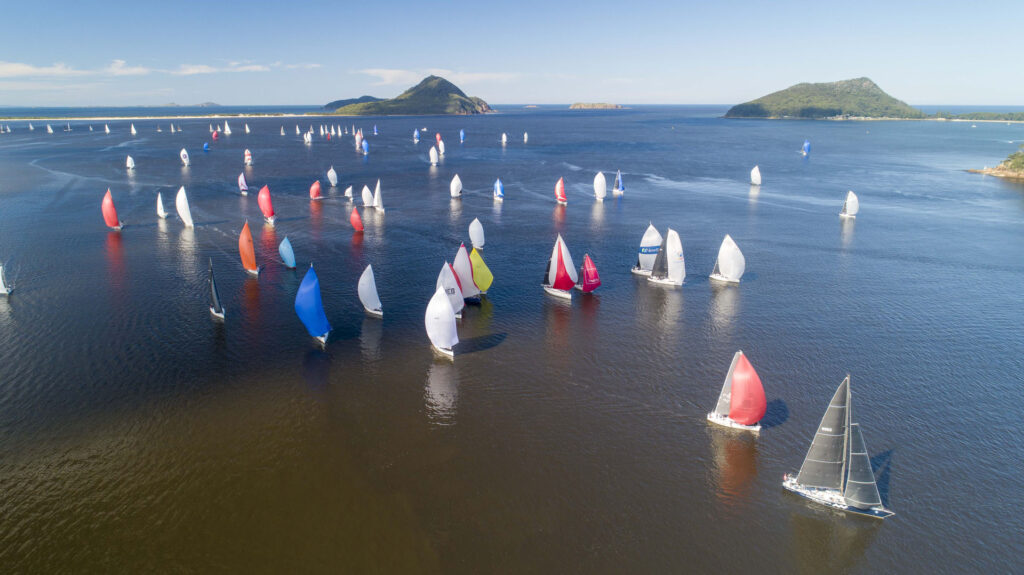 The fleet headed towards the finish line. Pic - Hover UAV 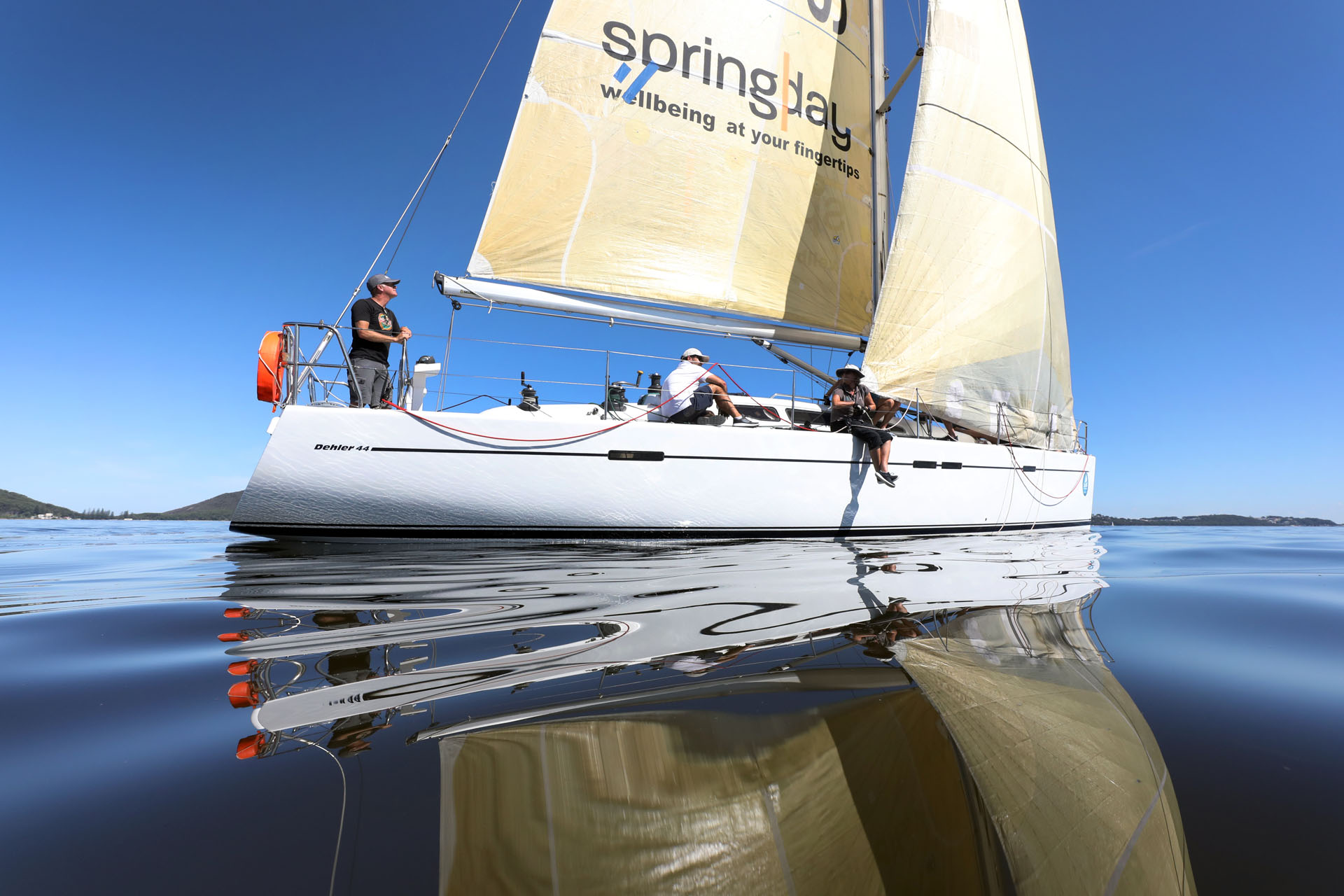 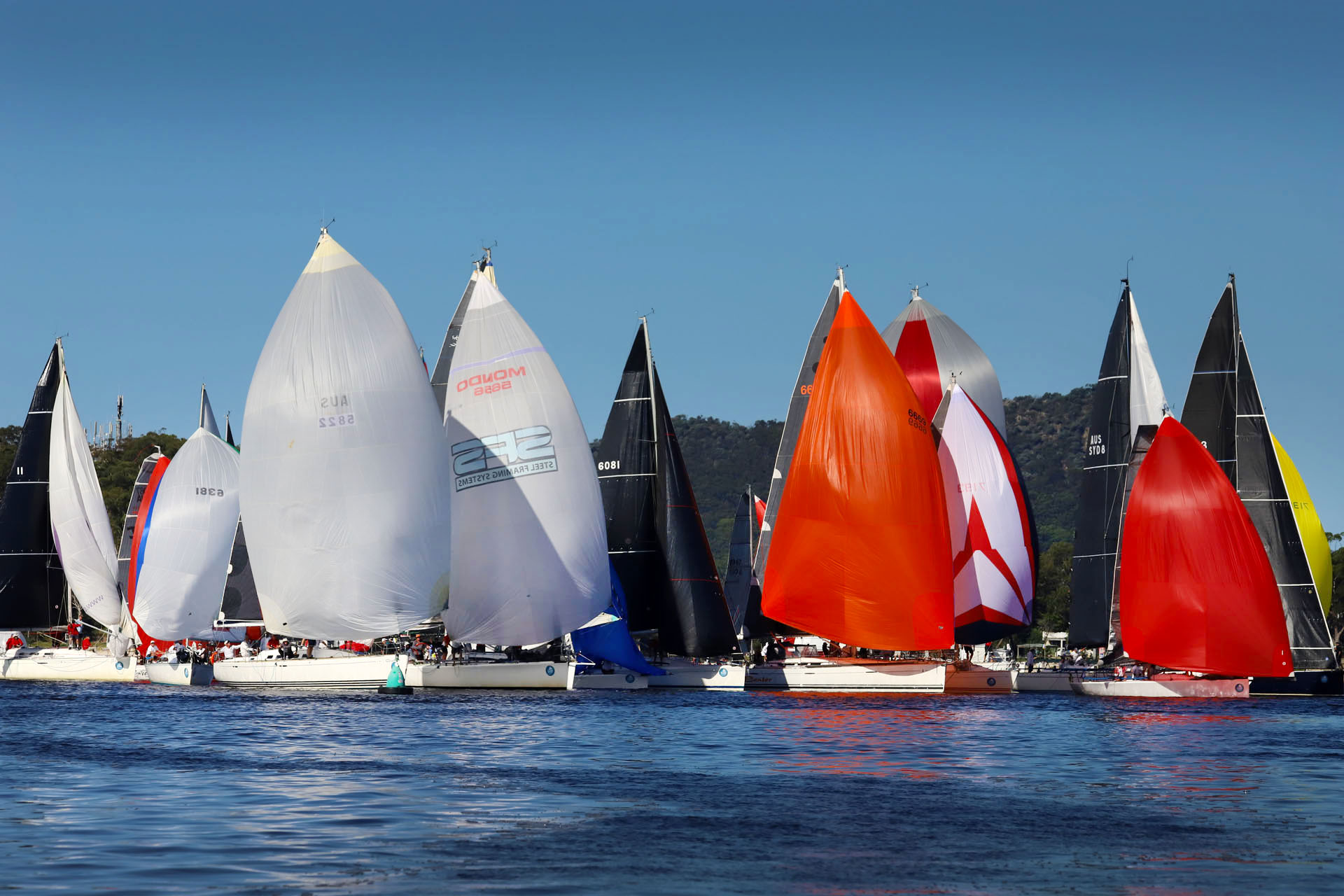 Rarely has there been a view as sweet as watching 120 yachts slide down a sparkling Port Stephens under spinnaker in Race 1 of the 2022 Bannisters Port Stephens Commodores Cup.

Three days earlier it was blowing 40 knots from the south, whipping up seas rated ‘large and powerful’ by the Bureau boys and girls, and for a while it looked like the start of Sail Port Stephens 2022 might be lacking starters.

A faint westerly fanned the line and spinnakers were quickly drawn for the run into picturesque Shoal Bay, albeit short lived. Boats then tossed listlessly on a painted ocean, driven less by sails than an outgoing tide that did them no favours. Tacticians earned their keep as breeze pockets appeared and quickly wilted.

Upfront, the fleet-footed Shaw 11 Little Nico saw its lead eroded by the Super 40 Tempo, before the Vismara V43 Three Stooges joined the fray. Ironically, it became a race of who went backwards the slowest in a strong band of current.

While they were working into a faint westerly, those at the back snared the first wisp of nor’east sea breeze and brought it down with them. The finish had been shortened, and suddenly it was anyone’s race to cross the line first, Fareast 28Rs and Young 780s mingling with the big boats as a blanket of sails stretched across the horizon.

The Farr 40 Exile poked its bow in front briefly before Little Nico set its kite and accelerated back through the pack to cross first in an elapsed time of 2hr35m. From then it became a battle for the race committee to record finishers, the radio chatter akin to a livestock auction.

For Little Nico, it was a virtual carbon copy of the maiden race of Sail Port Stephens 2021, bringing back a sense of de ja vu for skipper Mitch White.

“We’re two from two – we punched out a nice lead then watched it evaporate again,” he said. “Today wasn’t about finding the breeze, it was about keeping out of the tide … it felt like we sailed 30 kilometres up that last leg, only to watch our lead evaporate.

“That’s sailing – often it works the other way, where the fast boat wins by a mile because the breeze fades. The sun was out, and it’s nice to be here – so sailing was the winner today.”

The Sydney 40 Mako crossed third overall and edged out David Newton’s Dehler 46 Y Knot for handicap hours in Division 1, with Gunther Schmidtlindner’s Austmark rounding out the podium. Division 2 was led by the Thompson 920 Road Runner, a new purchase for skipper Paul Heyes – its time of 2hr37min was second only to Little Nico on the day, such were the conditions.

Handicap victory went to the KD4, a Dehler 44 that shipwright owner Joe de Kock repaired after a grounding. TenSixty, a Radford 10.6 owned by Ian Green, was second and the magnificent S&S42 Vittoria third.

In Division 3, Pete Farrugia’s Bull 9000 Bullwinkle was quickest on the day but the all important PHS result went the way of the Hanse 370e Trim (Chris Laughlan) from Slac-n-Off and Travel Time. Fastest time of the day on the shorter ‘Course B’ went to the Fareast 28R (named Fareast 28R) – just 2hr23. Last Tango, a Catalina 27.5, took the handicap prize from Even Finer and Derek Sheppard’s Elliott 780 Blacksheep.