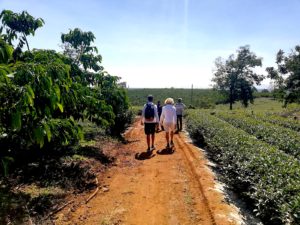 The Tea Route, which Francis Joyon and the crew of the IDEC Sport maxi-trimaran are following (ETA in London on Wednesday), is the basis of an ocean record dating back to the 10th Century.

At that time, the big American and British clippers trading tea between China and Europe fought merciless battles to be the first back to London with their cargo to be able to sell their tea at the best price.

Joyon and his crew are also bringing some tea back to Europe after their long Asian voyage. Not to sell, but to promote the ancient way of growing tea, which continues today, and the beneficial educational measures put in place in particular in Vietnam, where the boat had a stopover in December. We look back at one of the remarkable stopovers in the crew’s Asian Tour – Vietnam.

During the stopover in Ho Chi Minh City, the crew of IDEC Sport took advantage of the opportunity to meet some producers of tea, spices and organic herbs grown near Saigon by the isolated communities in Northern Vietnam.

The crew was able to visit the Bao Loc tea garden, meet some producers, stroll around the tea plantations, taste the famous green tea and bring some samples of this organic, traditional product back to London with them.

Organised in a cooperative, the Hiep Thanh Co firm, which welcomed the sailing crew, works with 850 households and has developed the production of the traditional tea over 650 hectares.

Their product has been certified as an organic and fair trade product. Hiep Thanh Co also supports the philanthropic organisation, SANSE in order to encourage access for young people in the isolated regions of Vietnam to higher education.