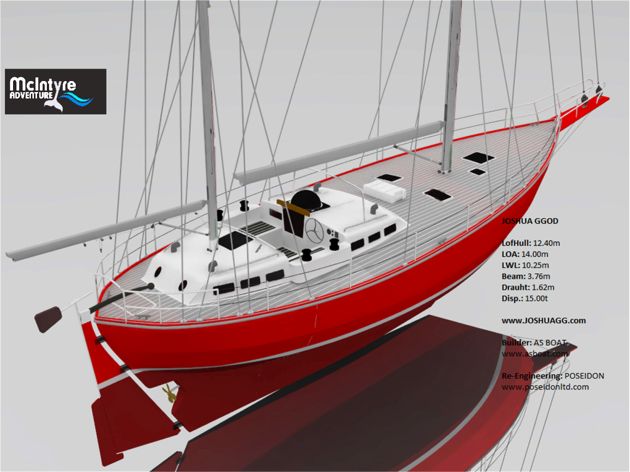 3D render of the 40ft Joshua Class yacht adopted for the 2022 Golden Globe Race. The first production yacht will be unveiled at the start of the 2018 Golden Globe Race in Plymouth next June.

Dateline 22nd August 2017, Plymouth. UK. The story of Sir Robin Knox-Johnston’s battle to stay ahead of French yachtsman Bernard Moitessier in the 1968/9  Sunday Times Golden Globe solo round the world Race is one of legend.

The 2018 Golden Globe Race, set to celebrate the 50th anniversary of Knox-Johnston’s victory in his traditional 32ft yacht Suhaili, has attracted 27 sailors from 14 countries to compete in similar type yachts between 32-36ft in length. This race, starting from Plymouth on June 30 next year has drawn so much interest that competitors, unable to prepare in time, are setting their sights on the 2022 race.

This announcement made today, the 49th anniversary of Moitessier’s start from Plymouth on August 22, 1968, will celebrate the huge contribution that the Frenchman made to solo sailing by introducing a second class of 40ft Joshua steel-built one-design yachts to the fleet.

The start of the original Sunday Times race was fluid; competitors could set out from any port in northern Europe between June 1st and October 31st. The winner would be the first to finish back at their start point and take claim to be the first to sail solo non-stop around the Globe. A £5,000 cheque awaited the one with the fastest elapsed time.

Knox-Johnston set out from Falmouth aboard Suhaili  on June 14. Moitessier followed 79 days later in his 40ft steel ketch Joshua. By Cape Horn, that lead had shrunk to 17 days, and many expected Moitessier to overhaul his British rival on the final 8,000 mile chase back up the Atlantic. But instead of going on to claim his share of the glory, Moitessier Inexplicably turned east to make a second circumnavigation of the Southern Ocean. The first the world knew of this volt-face was when the Frenchman delivered a message fired by catapult at a ship anchored off Cape Town saying that he had decided not to complete the Race, but to continue on a second circuit “To save my soul” as he put it. By then, Knox-Johnston’s traditional ketch Suhaili was closing on the Western Approaches to the English Channel and he became the sole finisher out of nine starters. Moitessier finally dropped anchor in Tahiti.

Would the Frenchman have overhauled Knox-Johnston on the final leg back up the Atlantic? Fierce discussions continue across the English Channel. Knox-Johnston admits that it would have been close. One mistaken myth even suggests that Joshua was leading Suhaili at Cape Horn.

Now the 2022 Golden Globe Race will provide the litmus test. A maximum fleet of 10 Joshua Golden Globe one-design yachts will make up a Class 2 start on Sunday August 21, 2022 approximately three weeks after the smaller Suhaili class yachts. The exact date will be determined from the average time that the first six yachts take to complete the 2018 Golden Globe Race.  “The leading yachts in next year’s race are predicted to better Suhaili’s 313 day record by 40 – 50 days, so it is important to set a realistic rather than historic time gap between the two classes,” Race founder Don McIntyre explains.

Hull No 1 currently under construction at Asboat Yacht Builder in Izmir, Turkey, will be presented alongside the original Joshua at the start of the 2018 Golden Globe Race in Plymouth. Everything about this new one-design class speaks of the original Joshua. She may be slightly longer, have a little more beam and draft, together with a taller main mast, but the essence remains. She looks, feels and will sail just like the original.

Constructed from laser-cut 5mm, 6mm and 8mm steel sheet, these multi-chined class yachts are being built to strict one-design rules.

“This is an exciting development for the Golden Globe Race, creating a new class of simple, safe, affordable and competitive one-design yachts to race around the world” McIntyre adds. “They are incredibly strong with five watertight compartments and will make classic high latitude adventure yachts able to cruise safely anywhere in the world, including Antarctica before or after the 2022 Golden Globe Race”

The strict One-design rules also stipulate the number of sails that can be carried during the race, and to make it a completely level playing field, sails for all Joshua class yachts will be supplied by one official loft.  And to further the spirit of Bernard Moitessier, competitors can use only replicas of Joshua’s original wind vane self steering system. There will be no room onboard for commercial steering systems.

A fully equipped Joshua GGR yacht and entry in the 2022 Golden Globe Race will cost around 300,000 Euros.  The order book has opened at www.joshuagg.com where details and class rules are also posted.

Entries for the 2022 Golden Globe Race will open on August 22, 2018. The current 22 production yacht designs including Eric designed Suhaili replicas approved for the 2018 GGR will be maintained and make up the Suhaili Class. This will have a maximum of 20 entries.

The new Joshua Class will be restricted to 10 entries, all built under licence to the same strict One-design rules.

The Notice of Race will be modelled on that for the 2018 Golden Globe Race with only minor amendments expected. Click here to download PDF.

This sets up for a classic re-run of the original battle with the Suhaili class yachts being chased down by the Joshua one-design fleet. There will be overall and class winners, together with a special trophy for the first Joshua class yacht to reach Tahiti on the second lap!