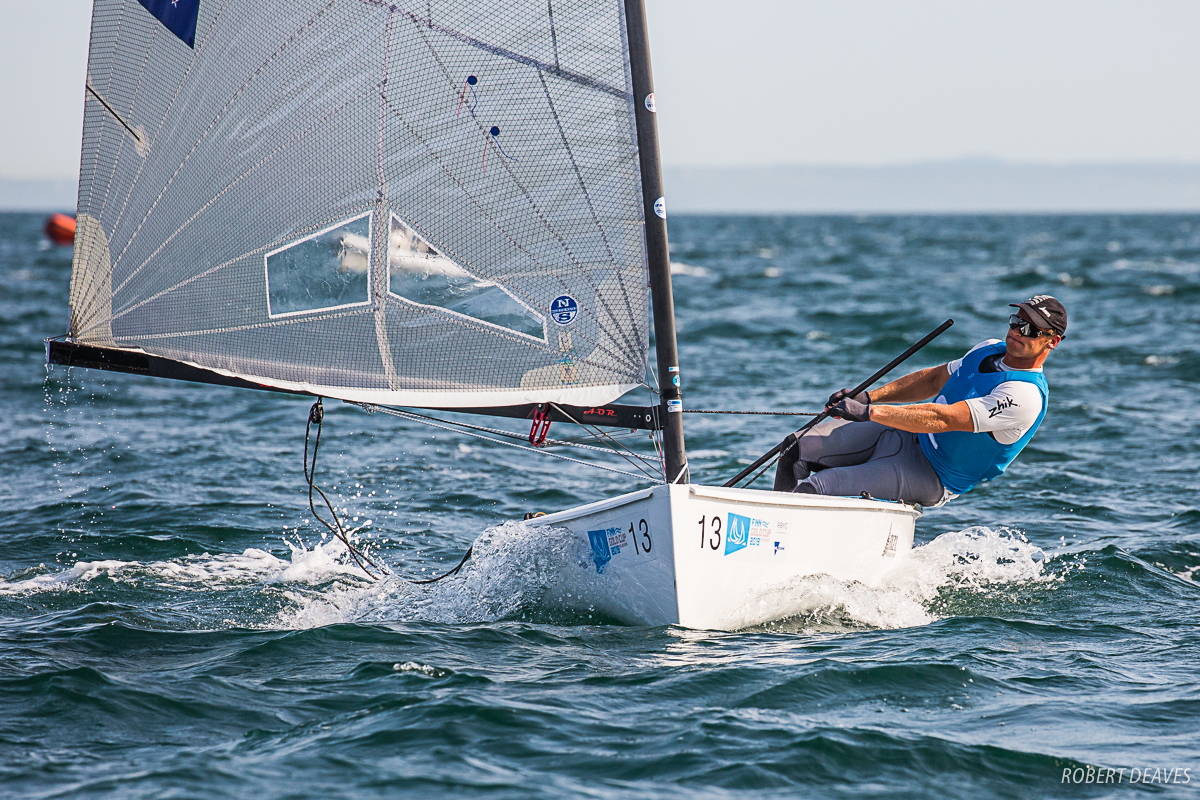 New Zealand’s Josh Junior has taken a 14-point lead at the top of the Finn Gold Cup in Melbourne, Australia, after another solid day on Port Philip with a fifth and a first. Nenad Bugarin, from Croatia, is up to second with Andy Maloney, from New Zealand, down to third. The first race of the day was won by defending world champion, Zsombor Berecz, from Hungary.

The fleet was held ashore an hour to wait for the wind and once everyone got on the water it was only 6-8 knots southerly for the first race before the wind died down again, causing another wait between the two races of the day. The sailors only got back ashore at seven p.m. but managed to get two races in.

The first race of the day, Race 3, got away cleanly at the third attempt under black flag. Nils Theuninck, from Switzerland, led at the top from Sweden’s Johannes Pettersson and Berecz, who gradually moved through the fleet to take the race win while, while Sweden’s 2017 world champion Max Salminen finished second with Pettersson crossing in third.

With the wind dropping after race one, sailors had to wait for over an hour before the wind returned. But patience was rewarded with a solid 8-10 knot breeze and some nice waves.

Race 4 got underway on the second attempt after a general recall following a change in the wind direction. It turned into a Kiwi-British affair. Brit, Ed Wright led the charge ahead of the Kiwi pair of Maloney and Junior. Junior took the lead downwind and was never really threatened for the win, while Maloney passed Wright on the second upwind. They finished in that order.

Olympic champion, Giles Scott from Britain, had a difficult first day but two fourth places have moved him up to fifth overall.

He explained the day, “The forecasts here seem so hard to predict what we will get. The chat in the morning was 15 knots booming sea breeze but it didn’t really come and we had a pretty soft 6-7 knots, which came up to 8 or so in the second. I was a bit more consistent today which was good.”

“Yesterday, I had two clangers off the start. I managed to fill my boat up with water in the first start which isn’t really the way that you want to start a world championship, though I managed to pull through the fleet reasonable well which was good.”

“The Kiwis have been really consistent, especially JJ, though Andy had a bit of a wobble in one of them today. They have been good for a long time and have a good thing going, but I come to world championships to try and win.”

Heiner moves up to fourth after a 7th and a 5th.

“It was another lovely, tricky day. After everything I think we ended up with up to 12 knots after a postponement earlier this morning. Really nice sailing conditions and I think I managed today well again. But I need to step it up a little as the Kiwis are on fire, but pretty happy with the racing so far.”

“I think it’s a big change going to come tomorrow with the northerly wind and the 40 degrees, and the flies have already arrived, but I’m looking forward to the rest of the week and it’s good fun racing here.”

Theuninck is up to seventh overall after a better day than Monday. “I had a more difficult day yesterday. Today was better, with two top sevens, so I am pretty happy with that.”

He has benefited from training alongside Heiner. “I have been training a lot with the Dutch at the beginning of this winter, in Scheveningen, and that was good. We came here end of November for three weeks training, along with some other guys, so that’s been really good as well.”

What has he learned? “That I have to push really hard if I want to beat him.”

“Only four races in and six to go, and the medal race if I qualify, but still a long way to go and I think here it is much more important to learn lots and take everything that I learn here to Genoa for the Olympic qualifier.”

The talk all week is of some extreme weather arriving mid week. Scott explained “We’ve got heaps of heat coming and I think we could see 40 degrees tomorrow, though I don’t know if that is a good thing for the sea breeze or not. The days we’ve had that in the past during training, more often that not we’ve just hidden and not gone out, so it’s going to be a tough day tomorrow if that does come through.”

The 10 race opening series continues until Friday, with the final race and medal race scheduled for Saturday 21 December.