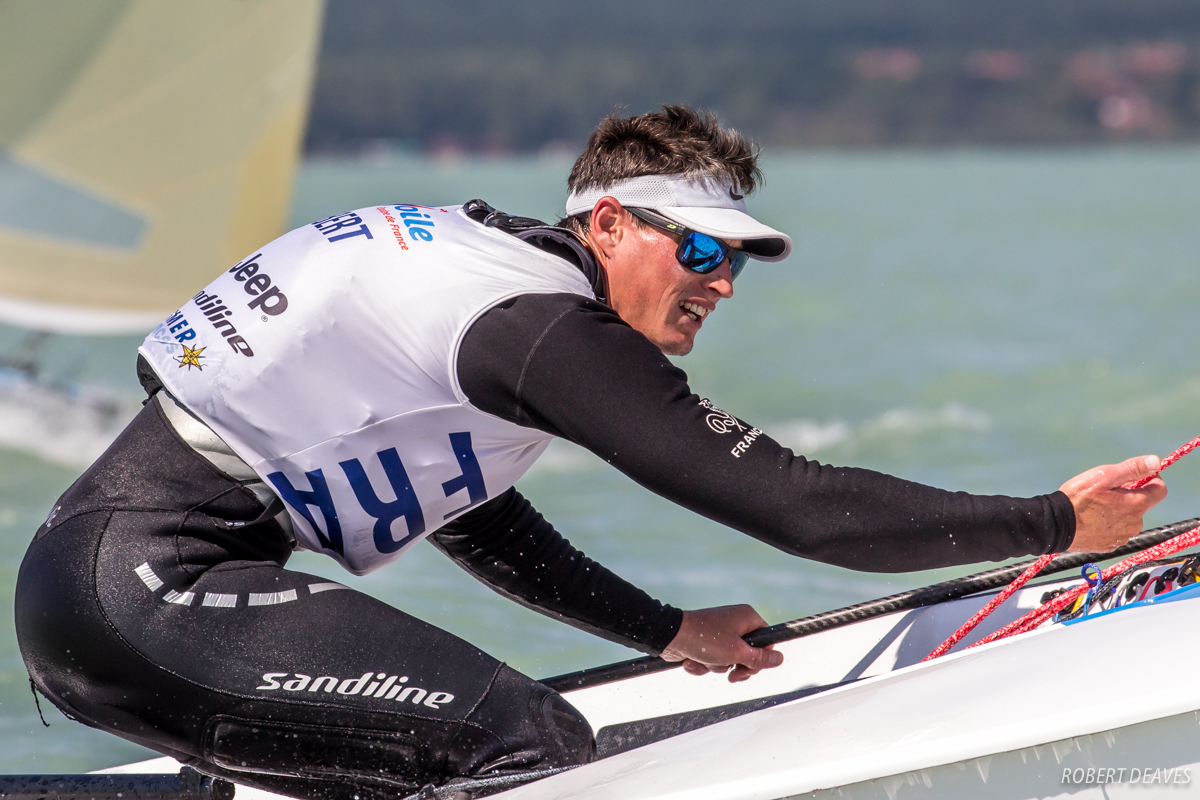 Jonathan Lobert, from France, has taken the lead at the Opel Finn Gold Cup at Balatonföldvár, Hungary. Though he led both races on Day 2 at some point, the tricky Balaton breeze got the better of him twice and the race wins went to Brit, Ed Wright and Swede, Max Salminen. Salminen is now in second with Facundo Olezza, from Argentina, third.

The forecast was for slightly less wind than Monday and from further to the south. But it was still shifty and tricky with many place changes through the fleet. Huge gains and losses could be made with a few lucky, or unlucky, decisions.

Race 3 got away first time in 10-14 knots. Jake Lilley, from Australia, rounded first from Lobert and Ioannis Mitakis, from Greece. Lobert flew down the run to lead through the gate and looked to be heading for a win. However a big right hand shift on the second beat shuffled the leading pack, with new U23 World Champion, Oskari Muhonen, from Finland, leading Wright round the final top mark.

Nicholas Heiner, from the Netherlands, also made gains and was soon chasing the leaders downwind and just moved into second just before the final mark, with Mitakis moving back up to third. Lobert crossed someway back in ninth.

It took some time to get Race 4 away. The wind initially started to drop, but after a 30 minute postponement, was back up to 10-12 knots. One general recall and two black flag starts pulled out seven boats, including overall leader Nenad Bugarin, from Croatia. Lobert was again in front at the top mark, after favouring the middle left, from Arkadiy Kistanov, from Russia, and Salminen. The same three led through the gate, but on the second upwind, the left side came in, with Lobert being more conservative in the middle, and losing out again.

Salminen came past at the top and extended downwind for a comfortable win. Lobert hung on for second and let a tightly packed group across the line with Olezza also gaining hugely to cross third.

Oliver Tweddell, from Australia, almost didn’t make it to the event, suffering from a broken finger. Only given the go ahead last week he is glad he made the decision, as he is now in 13th place, and top Australian, after a reasonable start to the week.

“It’s going to be a quite high scoring regatta, and especially considering my broken finger I am happy hanging in there when we’ve had free pumping every race.” He is hoping for no more free pumping for the rest of the week.

Olezza moves up to third after three top four places in a row.

“It’s very tricky because there are a lot of boats and it is very shifty and puffy all over the race course, so sometimes you just need to be a little bit lucky, and just look around.”

He is also not at his best this week with illness. “Tough four races, with full free pumping. I am not in my best shape but will just sail the best I can. The first race [Monday] was not so good for me, but the next three were all top five so I am happy with that and looking forward to some more consistency.”

Wright has perhaps the most inconsistent scoreline so far with two wins, a 58th and a 19th. The former World Champion sits in 12th overall.

After winning the first race today, he was very deep in the second and struggling.
“It wasn’t looking too good at one stage. It’s one of those places where you can take some big chunks out of the fleet on the shifts. I managed to get lucky and round the second top mark pretty well. I went right at the bottom and left at the top. I think the right just ran out of pressure and I had a nice pressure on the left.”

“It’s quite choppy so a bit more pressure over the waves is a big help.”

Lobert could have come ashore with two bullets, but was nevertheless still less happy with a 9,2.

“In the first race I missed the right shift, and in the second race, I was a bit scared from the right in case it happened again so I was staying in the middle, and then it came from the left. You cannot control everyone.”

“It’s a bit frustrating but in those conditions you have to take what you have and in the end it’s two top ten, which is good, and will be a good average. It was a good day in the end.”

It’s a big fleet with big start lines, big shifts and big pressure changes, with lots of sailors already picking up some big points. So it’s no real surprise that only one person in the top 10 has won a race. That could all change tomorrow when with one more race the discard comes in and we start to get a real picture of what is happening. Initial forecasts showed the wind dipping towards the end of the week, so all the sailors will be keen to make every race count.