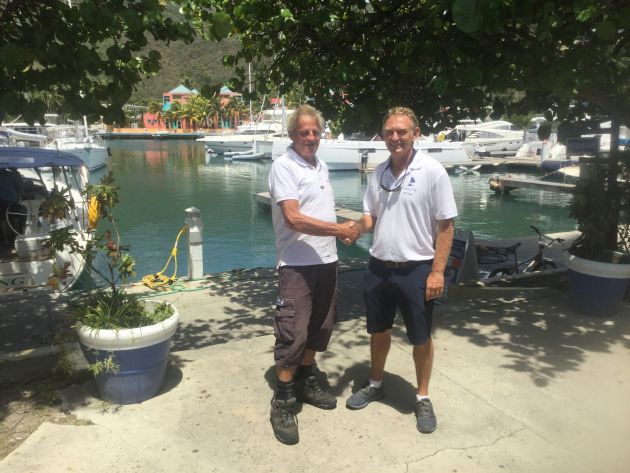 “Road Town” capital of British Virgin Islands is on the other side of the Island.

To get from Cane Garden to Road Town (by taxi) is over hills. Big hills. With much vegetation.

Not. Just of the bay or Road Town, but of islands and islands in a blue sea. BVIs and the overlapping US Virgin Islands. Terrific.

From Puerto Rico (US) in the west, US VIs, & BVIs in the east are the “Leeward Islands”.

Like any other day, monitored by The United States Coast Guard, Puerto Rico.

(On emergency channel VHF 16.) Give warnings and alerts.

During Easter there was a self charted yacht on a reef in the BVIs. Crew needed rescuing.

Another in the BVIs was an upturned dinghy with outboard (from a charter Co.) where are the former occupants?

In the US VIs an outboard power boat took a wave, dangerously full of water, 4 elderly people needed lifting.

A cruise Liner had a 35 year old overboard. Eventually the Liner found the body and recovered it. (Your guess).

All monitored and managed by the USCG. Great work USCG Puerto Rico.

Many 1000s of miles away, similar done by Australian Maritime Safety Authority. (AMSA). 1000s miles of coast and 1000s square miles of ocean.

As with all other Sea Rescue.

Forget the Globe Vendee. I see more French long range cruising the oceans than any other nationality.

Many family. Mum, Dad and wee kids. Not with normal big national flags. Just a small tricolour at the back. And Mum, and Dad, and the youngsters.

I said goodbye to the 60 ft carbon fibre catamaran Gizmo, with Paul and Shiralee and motor boated my Perie Banou 2 around the west end of the island to Nanny Cay Marina on the other side of Tortola.

I like Nanny Cay Marina best. As the management would say “is the best”.

Off and on I have been putting into that Marina (a long long way from my Western Australian home) over 27 years. It improves more and more.

Marina and resort complex with services.

Cafe at one end. Breakfast and lunch.

But yea for me, is the beach bar below. Not expensive.

Food. A round island bar and within a few hundred feet a nice white sandy beach on the ocean to swim in, and separate, near-to, the Marina/resort swimming pool.

Happy hour the beer is $2 a stubby. Whilst the Americans drink “Pain Killers” (out of large martini glasses). Must be good for you! They put salt in it.

Miles Sutherland-Pilch is the General Manager for the whole complex. ” Nature's perfect gentleman”. He is.

Enough, I must untie and sail for the Panama Canal.

Regards to all. See you next week.