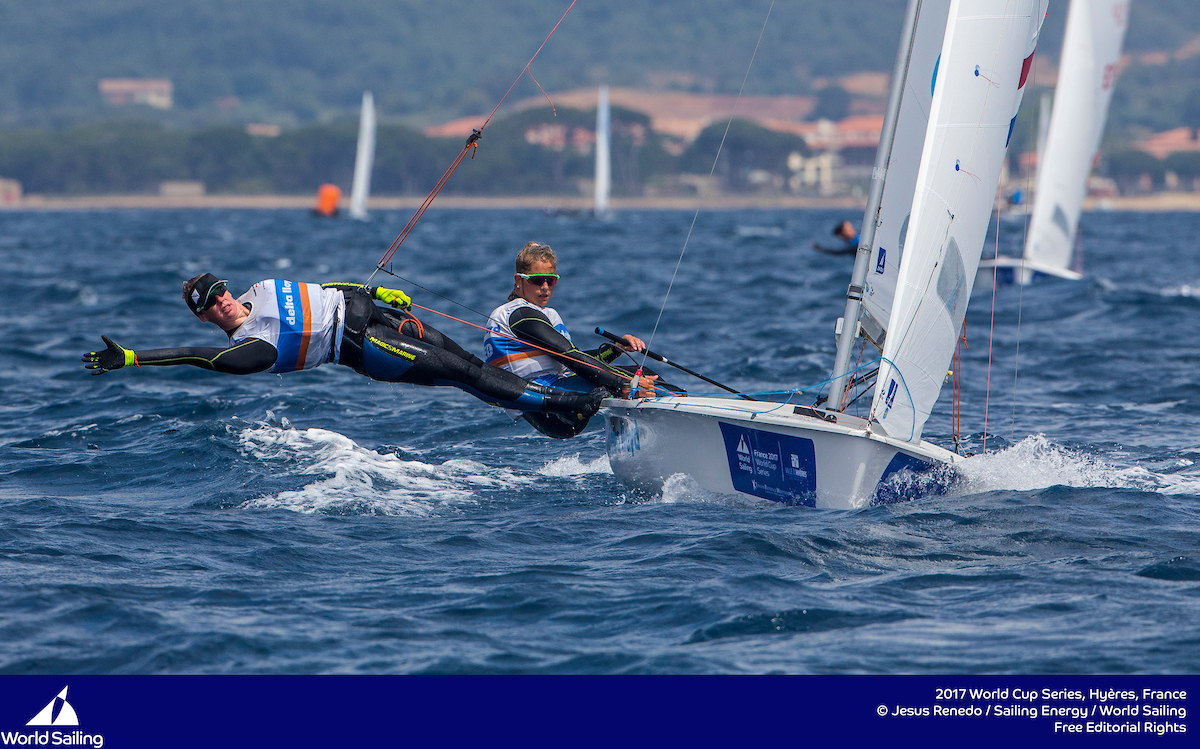 Out of the 534 competitors from 52 nations racing across ten Olympic events, Open Kiteboarding and 2.4 Norlin OD, the Dutch team were the standout performers.

Following a brief morning postponement due to a wait for the wind, the 470 fleets got out for a 12:30 start, sailing in a westerly 10-15 knot breeze.

The Dutch duo are on a hot streak in the Women's 470, winning gold at the opening 2017 World Cup Series event in Miami, USA before securing the Trofeo Princesa Sofia title in March.

They were agonisingly close to claiming a medal at Rio 2016, missing out by a single point and as their rivals have gone onto new ventures or taken time out of the boat, Zegers and van Veen were quick to get straight back into action.

“We already knew we wanted to continue as a team,” explained van Veen. “It was an easy choice to carry on.

“Since the beginning of the year at the World Cup in Miami we have made a lot of improvements, we still know there is a lot of work to be done but we feel like great improvements have been made.”

Zegers and van Veen got off to a strong start in both of their races and when compared to their rivals they were simply faster as van Veen explained, “We had good boat speed in the first race and from there we just tried to defend the lead and stay in front of the fleet which we did well.

“In the second race, we had a really good start from the pin and got the lead straight from that. We just played the shifts then.”

A familiar battle is developing in the Men's 470 with Rio 2016 silver and bronze medallists separated by small margins. Greece's Panagiotis Mantis and Pavlos Kagialis were made to settle for bronze at Rio 2016, beaten to silver by Mat Belcher and Will Ryan (AUS).

The tables have turned, for now, in Hyères as the Greek team hold the lead on five points to the Australia's seven. Both crews posted identical results on day two, recording a first and a third but the Greek team had a better opening day with a race win and a fifth to take the lead.

On the rivalry with the Australians, Kagialis said, “It is always nice to race against people like Mat and Will as they are top athletes. When the level is higher you try more and you push more so it's nice.

“It makes the sport better.

“Our goal is always to get a medal. You do your best in the regatta and if you are up there near the end you then get to choose which medal you can push for. It's still early though, we have three days of racing before we get to that point.”

An interesting battle is developing in the Nacra 17 as the top three continue to fight for supremacy.

“We had good starts and took the right side so it was a good day for us,” said Lubeck who had a steady day with a 1-(8)-2 scoreline. Ea Cenholt added, “We had an offshore tricky wind but we succeeded in what was important for us, to be at near the top of the fleet at the top mark.”

From a three-way fight to a three-way tie, Great Britain's Dylan Fletcher-Scott and Stu Bithell, Argentina's Yago and Klaus Lange and Spain's Diego Botin and Iago Lopez are all locked on 16-points apiece in the 49er.

The trio scored a good set of 'keepers' on the second day, discarding their worst race which for all three was race one.

Martine Grael and Kahena Kunze (BRA) had another consistent day to consolidate their lead. Charlotte Dobson and Saskia Tidey (GBR) shone the brightest, however, winning a pair of races and claiming a fifth. As a result, they move into second place ahead of Victoria Jurczok and Anika Lorenz (GER).

Six further races were conducted in the Foiling Formula Kiteboarding and the perfect records held by Axel Mazella (FRA) and Nicolas Parlier (FRA) were crushed in the opening race of the day. Mazella finished second in the blue fleet and Parlier third in yellow.

That was, however, just one blip on the record as they got back to winning ways immediately after, taking the remaining five victories in their respective fleets. They are tied on 10 points at the top with Maxime Nocher (MON) following nine points behind.

From two Finn races, a 5-4 from Ben Cornish (GBR) and a 4-2 from Nicholas Heiner (NED) sees the pair tied at the top on ten points. The day's race victories went the way of Jorge Zarif (BRA) who is 11th overall and the sixth placed Ed Wright (GBR).

Finland's Tuula Tenkanen is making her first competitive appearance back in the Laser Radial after finishing fifth at Rio 2016. Any cobwebs were blown off on the opening day as she won the opening race. A mid-fleet finish followed but Tenkanen was back on form on Wednesday, winning another race. She leads on ten points, two ahead of Belgium's Evi Van Acker. Maria Erdi (HUN) and Viktorija Andrulyte (LTU) are tied for third on 13 points.

As the day progressed in Hyères, the breeze began to decrease meaning the Laser and RS:X fleets could only complete one race in a challenging, fickle afternoon session.

Racing continues Thursday 26 April at 11:00 local time. Live Medal Races will be shown on the World Sailing YouTube Channel on Saturday 29 and Sunday 30 April, bringing the penultimate event before the Santander Final to a close.