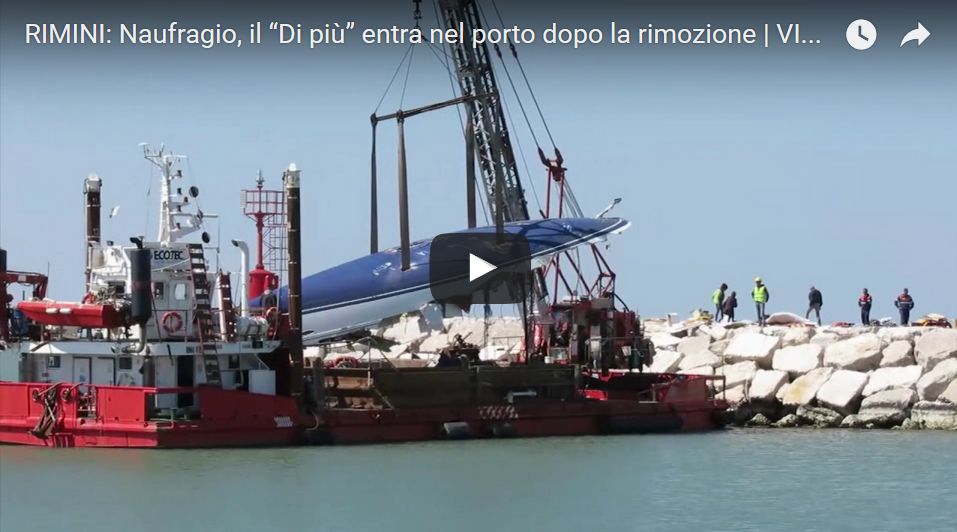 The Dipiù is hauled out of the water. Screenshot from The Maritime Executive video.

A tragic accident in the port of Rimini, Italy claimed the lives of four yachtsmen last week when a storm drove their vessel onto the rocks.

On April 18, the 50-foot sailing yacht Dipiù departed Marina di Ravenna, bound for Sicily. Weather conditions deteriorated shortly after her departure and she diverted to the port of Rimini, about 30 nm to the south. As she approached Rimini’s harbor entrance, her propulsion failed. Winds were gusting to 40 knots, and wind and wave action quickly pushed the disabled vessel onto the rocks of the harbor's jetty. In the pounding surf, the Dipiù lost her bulb keel, then capsized and dismasted, and the wave action ground her inverted topsides back and forth on the rocks.

One man was rescued by shoreside emergency responders, who ran down the jetty to bring him to safety. Another survivor was pulled from the water. The authorities launched a search effort for the missing, following reports that some of the crew had abandoned ship to escape the impending accident. Search teams recovered the bodies of the remaining four yachtsmen; the victims included yacht owner and skipper Alessandro Fabbri, 66, his daughter Alessia, 28, Ernesto Salin, 64, and Enrico Martinelli, 68. The survivors were identified as Carlo Calvelli, 68, and Luca Nicolis, 38.

In an interview with Italian daily Il Resto del Carlino, Carlo Calvelli said that the Dipiù lost propulsion just 70 yards from the harbor entrance. He recalled that she rolled to one side just before the engine failed; the crew tried to restart it but could not.

Salvors have already lifted the wreck of the Dipiù off the jetty. The vessel's hull will provide evidence for an investigation, which will be headed by the local prosecutor’s office.

Watch the videos at The Maritime Executive.