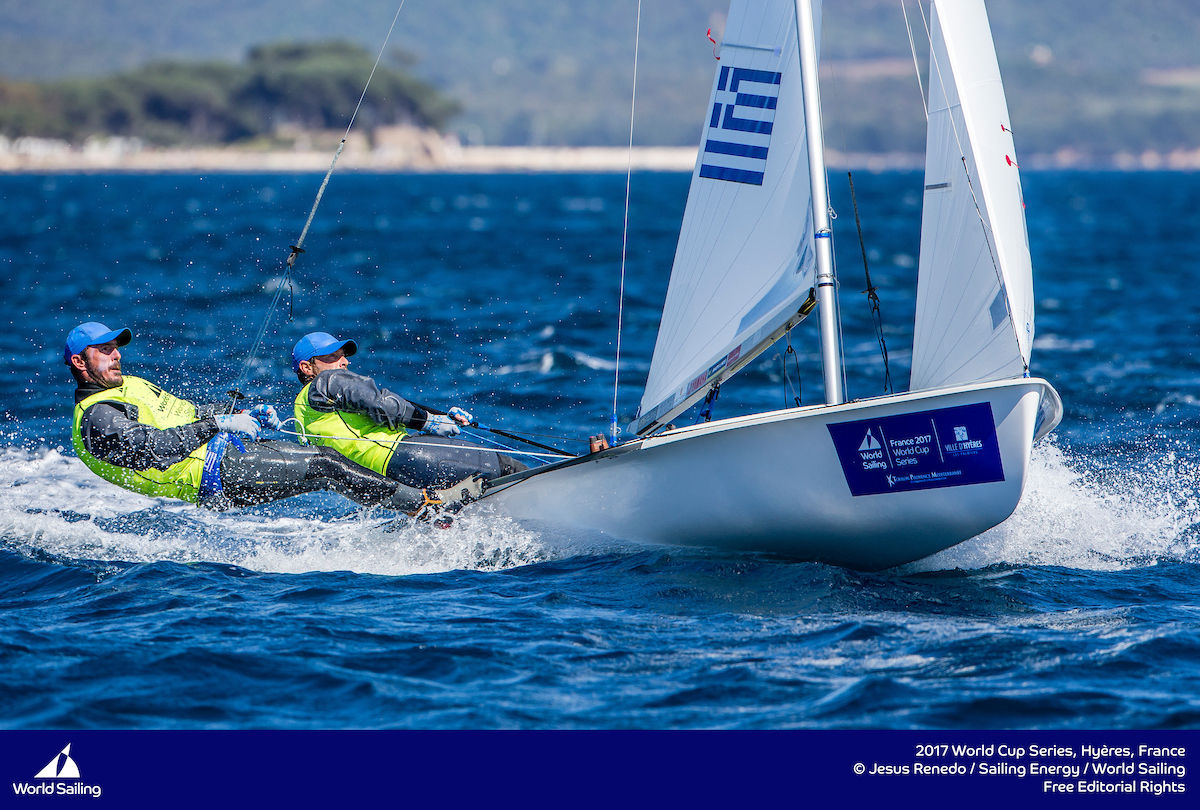 Sailors are always thrilled when they have a return of straight race victories. Then there are times when they are happy to come out in one piece, still within touching distance of the medals.

That was the case today at Sailing's World Cup Series in Hyères, France as chaos reigned in the Laser Radial fleet.

The competition in Hyères reached a critical stage on Friday with Medal Races imminent.

Saturday's racing will see the see the skiffs, windsurfers, multihulls and foiling kiteboarders fight for the medals after a day that saw all the competitors make a final dash to reach the top ten.

Medal Races on Saturday 29 April will be streamed live on World Sailing's Facebook and YouTube Channel. URLs and embed codes are below:

Meanwhile, the one person and two person dinghies leaderboards have taken shape with two fleet races and Sunday's Medal Races to follow.

Overnight, the forecast for racing on Friday was not looking good and Hyères was expected to be on the receiving end of 30knots of breeze, gusting 35. The breeze was strong in the morning and sailing postponed as the conditions were not deemed safe enough to sail. As the day progressed the breeze decreased enabling all but one fleet, the 2.4 Norlin OD, to hit the water.

The Laser Radial saw a day of chaos but Evi van Acker (BEL) has been there and done it. Van Acker was beaming with a smile ashore after racing following a sixth and 13th place to take the lead.

Explaining the day van Acker said, “We waited a couple of hours because it was too windy, then we got out there and it wasn't windy at all. Then it was shifty. We were far out today between fighting winds coming from the left, then the right, so today you didn't know where you were.”

It was probably making sense of the chaos that brought the smile to van Acker's face, “When we were racing there were very big variations in wind and strength so you were winning, then in the middle.

“I had some pretty good results in some very tough conditions.”

Overnight leader, Hungary's Maria Erdi, crept over the start line for her second black flag of the regatta and has fallen to ninth.

Carrying two maximum scores in a one discard regatta effectively puts you out of the running, so what now for Erdi, “If I make the top ten I am happy. That was my goal before the regatta started and it's still my goal.”

Italy's Francesco Marrai took the shifty conditions in his stride with a bullet and fourth place to move him top above Cypriot Pavlos Kontides.

Great Britain's Nick Thompson is now tied with Kontides with an impressive second and third place. Those scores were impressive as second placed Kontides and fourth placed Matt Wearn (AUS) both had high scores on the day which they had to discard.

With another day of qualification racing before Sunday's live Medal Race, the top order in the fleet could yet again switch around as a competitive Laser fleet continue to battle.

It was a day of contrasts in the Men's and Women's 470. Blows were exchanged between the leaders in the women's and the men's saw some knock outs.

Still on the same points total, Afrodite Zegers and Annaloes van Veen (NED) and Linda Fahrni and Maja Siegenthaler (SUI) both notched up a bullet and second place to ensure that the Hyères title goes right down to the wire. With one more day of racing before the Medal Race, you wouldn't bet against these two going in to a double points decider neck and neck.

Overnight leaders, Panagiotis Mantis and Pavlos Kagialis have dropped after a 21-22 day which they have to carry. They now sit on 54 compared to the Australians 14 and the reason was simple, “We had really bad starts today,” said a despondent Mantis, “We also missed the first shift and when you do both of those you are in trouble. It was such a bad day.”

The Greeks will have to recover their composure quickly and return to winning ways just to stay in contention for medals after an impressive opening three days of racing.

What a day Spain's Diego Botin and Iago Marra had in the 49er. Coming in the day the Spaniards were in medal contention. At the end of the day they had guaranteed themselves a gold medal. With a bullet, sixth and 11th, Botin and Marra have an unassailable 27 point lead ahead of the Medal Race.

Great Britain's Dylan Fletcher-Scott and Stu Bithell and Sweden's Carl Sylvan and Marcus Anjemark are tied on 76 points and will fight it out with Yago and Klaus Lange, on 83 points, for silver and bronze.

Fast becoming a regular sentence in a 49erFX day review, Brazil's Martine Grael and Kahena Kunze are in first place. Looking to add yet another gold to their ever growing collection, the Rio 2016 Olympic champions hold pole position for a Hyères win with an eight point lead over nearest rivals Victoria Jurczok and Anika Lorenz (GER).

There were some big climbers in the RS:X fleets shaking things up before Saturday's live Medal Race.

France's Louis Giard now sits top of the men's fleet after a 1-4-5 scoreline which gives him a one point advantage over the man who has occupied pole position all week, Switzerland's Mateo Sanz Lanz. The Swiss windsurfer could only card a 9-14-8 which are all scores he carries.

Fernando Echavarri and Tara Pacheco (ESP) hold a seven-point advantage over their nearest rivals, France's Moana Vaireaux and Manon Audinet in the Nacra 17. The Spanish pair finished the qualifying series with a bullet which made up for a discarded tenth place in the previous race. Add to that a second place and it was enough to lift them above the French team who scored 11-2-5.

On day three, Turkey's Alican Kaynar thought the then leader Nicholas Heiner (NED) had sailed conservative to take the lead. Well Kaynar was anything but as he took two bullets to take top spot from the Dutch sailor's grasp.

Damien Seguin (FRA) remains on course to win a seventh Hyères title in the 2.4 Norlin OD. The Frenchman was somewhat lucky however, that the fleet only raced once as he was back onshore fixing a mechanical issue on his boat while his competitors were out racing. Spain's Rafa Andarias claimed the only bullet on offer to lift himself in to fourth position. Two races will bring the 2.4 Norlin OD fleet to a close on Saturday

French friends and rivals, Nicolas Parlier and Axel Mazella continue to lead the way in the Formula Foiling Kiteboarding. Parlier has the upper hand with five wins from six races which gives him a four-point lead over Mazella. It was day of mixed fortunes for Mazella, but still good enough to give him a 22-point cushion over third placed Toni Vodisek (SLO)

Live Medal Races will be shown on the World Sailing YouTube Channel on Saturday 29 and Sunday 30 April, bringing the penultimate event before the Santander Final to a close.