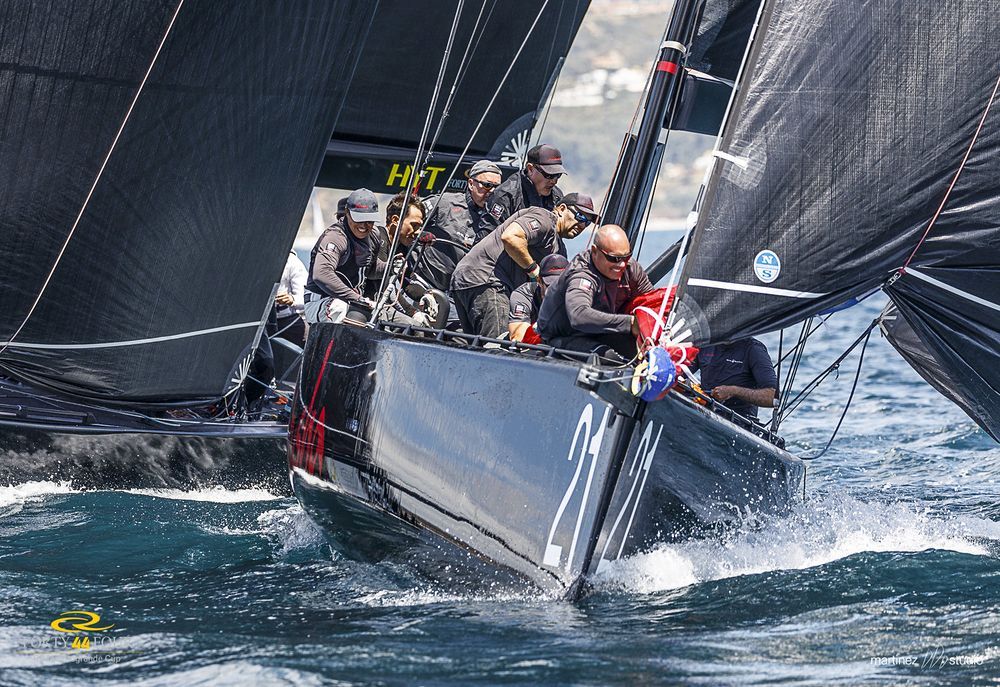 The day kicked off with a big win for Alexander Novoselov's Katusha. Photo Martinez Studio.

Sotogrande, Spain laid on a tricky first day of the 2017 RC44 Championship. Nonetheless Principal Race Officer Peter Reggio read his crystal ball well enough to stage four races on this course which uniquely has Europe, Gibraltar and North Africa as a backdrop.

“The races were fair – we're satisfied, but it is as tricky as hell,” said Reggio. “The second last race we changed the finish line by 20° and we should have changed it by 60°. But you never know because every so often it would bang back on you.” The breeze started blowing offshore from the west before going right and then dropping and filling in from the south during race three. In every race there was at least one course change.

Today's four races each had a different winner, but only two teams could claim any consistency. Vladimir Prosikhin's Team Nika managed to bang in four results, none worse than fourth. The Russian team won the second race, but both Prosikhin and tactician Terry Hutchinson were prouder of race three, when they salvaged a fourth despite being over early at the start.

As the serial TP52 and Maxi 72 winning tactician recounted: “We were dead last but there was great attitude and demeanour on the boat and Vladimir showed great mental toughness. We have talked a lot about sailing the same way regardless of where we are on the race course and he did a great job at that.”

As to their prospects: “It is day one so too early to say anything,” mused Prosikhin. “I like to see the boat being consistent and everyone working together. Terry is back and he has returned the spirit we have been missing. He is a great tactician and a very good coach. He's very strict and is nurturing me. It is nice to see the team strong again.”

Team Nika ends the opening day two points clear of Chris Bake's Team Aqua in turn three points ahead of Bronenosec Sailing Team. The light blue RC44 was widely considered star performer today as all but three of her crew, including the helmsman are new.

This season Kirill Frolov is sharing helming duties with Vladimir Liubomirov. “It was very nice – a big advance for me and our team,” said Frolov. “Two second places were great. It is very shifty and there were so many surprises at the marks, but I like it very much!”

Bronenosec also has a new tactician in Kiwi Cameron Dunn, who was pleased with their day. “It was better than expected for sure for day one. It was Kirill's first day racing in the RC44 fleet and he was fantastic, really cool. It was a race course with plenty of shifts and opportunities. Our goal was to come in feeling like we had sailed the boat better through the day and we did that 100%.”

The day kicked off with a big win for Alexander Novoselov's Katusha, a nice continuation on from the team's third place in Malta last autumn. “It was a very nice start but then we were less lucky,” said Novoselov. “It is a nice place but very challenging.” Katusha followed their win with a 6-7-5.

During an especially snakes and ladders-like race three, Katusha found herself on the wrong side of the massive shift. As tactician Andy Horton recounted: “We went from second to last as we waited for it to come back. Some of the guys could have set a spinnaker to get to the mark.” Some luck was involved. In race one, Katusha won when they went hard right keying into a big lift when they tacked back. In the second they got pinned out to port leaving them second last at the top mark.

Gibraltar-based Peninsula Petroleum suffered last placed finishes in today's second and third races, the former due to a knot in a halyard, the latter thanks to the monster shift. “The wind went from 280° to 190° and we were in exactly the wrong spot,” recounted tactician Vasco Vascotto. However their pride was restored when in the final race Vascotto did read the wind better and led from the top mark and for the rest of the race, finishing with a giant lead, restoring them to fifth on the leaderboard.

Racing tomorrow looks uncertain with the forecast indicating big winds from the east and heavy rain. Join us from 11.30 CET on www.rc44.com for all the action live.