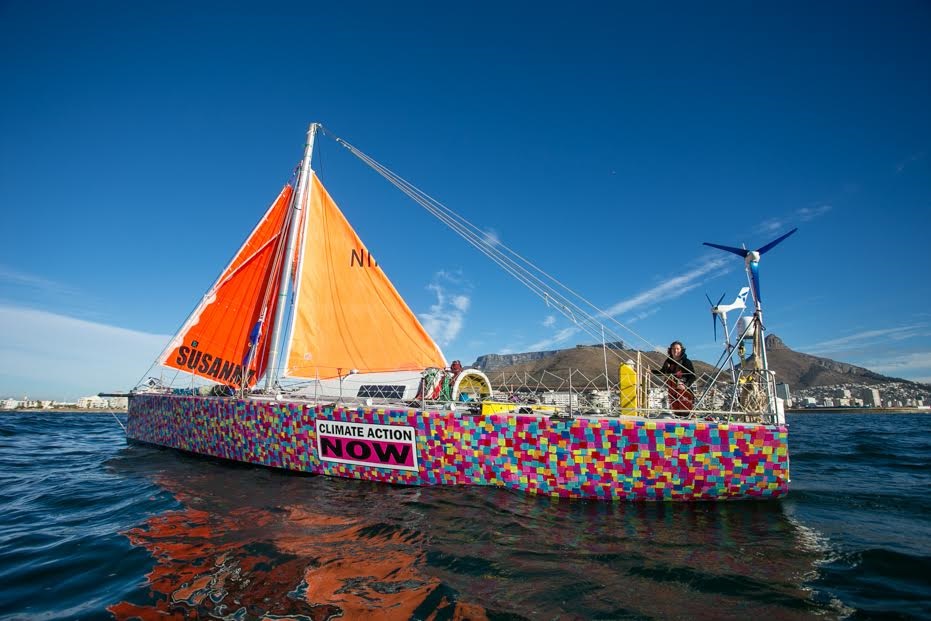 Well after my dismasting and very special welcome to Cape Town I have been very busy getting quotes, cleaning the boat and trying to figure out how to get a new mast with very little money.  I also took a closer look at the D1 shroud that was left on the deck with the local rigger and we noticed that four strands of the wire were broken long enough to have corroded…  This means that I was likely sailing past Iceberg Alley with a compromised rig.  I was very lucky to have made it as far as I have and put this down to me sailing the boat so conservatively.

After asking around it is looking like the rig could have been damaged by a stray electrical current.  The rigging wire was three months old so it is a baffle to everyone in the industry as to why this has happened at all but given the way the wire has broken this is the leading suggestion for the cause of the dismasting.  It is a real shame. From now on I will always be checking my mast for any stray current after any works get completed. As the mast is at the bottom of the ocean we will never know for sure, but I won’t let this stop me.

I have now had the chance to assess the weather that I would expect over the next month or two and have worked out that I have 4 weeks in which to repair the boat and get a new mast. This will allow me enough time to then sail back to my position of dis-masting and finish my record. There has been one little (BIG) hiccup though.

Unfortunately, when I was filling out the insurance paper work in Sydney before my departure there was a very costly typo…  Instead of having the mast insured for $120,000 the mast, rigging and sails were in fact insured for $20,000.  Not the best news.  I was really shocked that this had happened as several of us read through it and that no one picked up on it. What is done is done.

Edward Williams Marine Insurance and the underwriters Northern Reef Insurance have been absolutely fantastic in helping me, but the fact remained that the form said $20,000…  Edward Williams Insurance came back to me with a generous offer.  They were going to repair all the hull damage and issue $20,000 immediately towards the mast, rigging and sails.  They were going to waver the $13,000 excess and take the remaining $1,000 owing on the policy out of the $20,000 so that we didn’t need to find more money.

This was a very generous deal, however it didn’t get me back on the water with a new mast, so I went back and pitched for a sponsorship, so I asked if they would meet me half way and issued $60,000 towards the mast, rigging and sails.  This was my last-ditch effort, so I was very surprised when they agreed and both Edward Williams Insurance and Northern Reef Insurance put in a further $20,000 each, bringing my total budget to $60,000 for the rig, on top of the approval for the actual boat repairs. This is half the amount that I would need to replace all that was lost with the rig, but I was a step closer to getting back on the water. I am very grateful for their understanding and commitment.

So, over this last week I have been searching around to see if I could find a second-hand mast that would fit my boat.  The search began and we did manage to find a mast in Australia that would suit and do the job of getting me home, however this became a impossible option when I began investigating the cost of flying the mast over to South Africa. I almost choked when I was told that it was going to be within $40-50,000…  The mast was worth $20,000 so it was not an option.  I have been quoted from Associated rigging in Cape Town for a new mast.  The mast section only was going to cost $30,000.  This might sound like a viable option, but when you add all the bells and whistles like sails, hardware and ropes it would still be coming to $100,000 in total.

So, over this last weekend we have been phoning everyone in Cape Town and all surrounding yacht clubs in South Africa to see if there is any chance of finding a second-hand mast in Africa… I can truck it but flying is not an option, so it needed to be on the same continent as me…  As luck would have it we have found something that may fit and will be re-measuring on Monday to triple check.

I then need to have the rigger come and take a look before I can confirm but please keep all your fingers and toes crossed this is the only way that I will be able to get sailing again within budget. Even this will be a stretch but at least it will be possible.  If this mast doesn’t work then I need to raise another sponsor to help me with the costs of the other mast so if you are in a position to sponsor please get in touch.

Stress aside I have been deep cleaning the boat with the help of two locals. We underwent the massive task of removing all of the milk bottles from the bow of the boat so that the repairs can take place…  We became the entertainment at the V and A waterfront.  I have also dropped the jury rig down in preparation of the work starting this week.  Time is short as we rush to beat winter so that I can re-start the record.

With all of these preparations happening I have still found the time to be shown some of the local life and was whisked away by the DePinna family the night after my arrival to the local market in Hout Bay.  This is not just any market, but a colourful gathering of the local community with everyone entertained with a live band.  This night, the group performing were called 3 Tons of Fun…  Three larger-than-life Africans ladies with these huge voices and the afros to match.  It was a great night and nice to take my mind of things for a little while.

I also had the chance to get to know the crew of SV Delos, a wonderful mix of guys and girls all heading off on adventures.  I was sorry to see them go the other day, sailing on to Brazi,l after only knowing them for a week…  Given the sailing world I am sure our paths will cross again.

I also fitted in a BBQ or as the locals call it, a Brae, with the team from the NSRI the local marine rescue team and enjoyed a night of discussion on my journey as well as hearing some scenarios that could have occurred. It was safe to say that I learnt a little more.  I was taken on a tour of one of their rescue boats and even got to check out the engine room…  The NSRI is a complete not-for-profit self-funded group. They are the only marine rescue division in South Africa, so if you are interested in supporting them you can go to this link.  http://www.nsri.org.za/ways-to-support-us/give-a-donation/

So, I am now staying with a lovely couple Debora and Ray who have been very generous in inviting me into their home, letting me stay in their spare room.  They live right on the water, so I am still greeted by the ocean each morning and can go to sleep to the sound of the waves crashing on the beach.  With the ocean so close, I am always motivated and reminded of my dream to sail solo around Antarctica and while it is now with one stop, that dream is still very much alive. I will get past this bump in the road.

I also want to say a big thank you to everyone who has donated via the website and purchased a fundraising Signature Beanie.  Your contributions help a lot towards getting me back out on the water so I can keep promoting this message of Climate Action Now so thank you for your support.

I am at the moment trying to raise the last $20,000 that i will need to get sailing again so if you are in a position to donate your cup of coffee to me you can visit www.LisaBlairSailstheWorld.com.

Once again thank you.