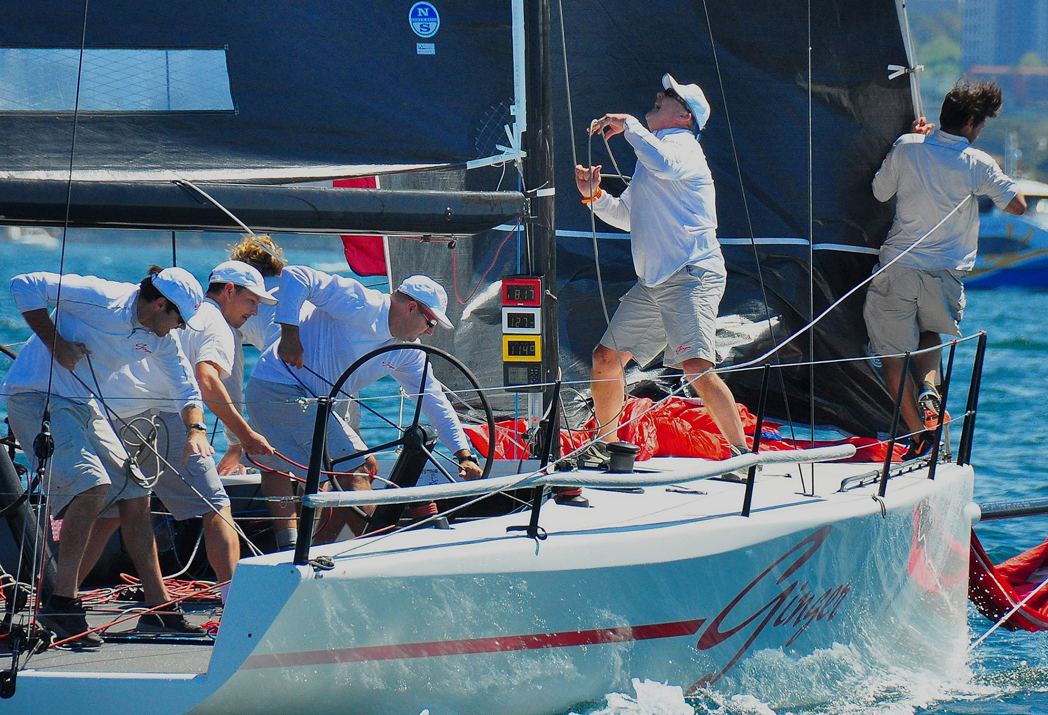 Ginger during the spring regatta on the harbour. Photo Bob Fowler.

A light air day one of the final act of the MC38’s 2016-17 season pointscore went to Leslie Green’s Ginger by the slimmest margin.

Green’s consistent 2,3,2,2 scores on The Sound, the stretch of water between South Head and Manly’s Quarantine Station, trumped Maserati’s 5,1,3,1 by one point, a worthy runner-up result given today was the first time on the wheel of an MC38 for Maserati’s replacement driver.

Chris Way is about to join the sporty one-design class with his own MC38, in the interim he agreed to helm  the closing summer series act on Saturday April 22 for owner Neville Crichton.

Way is well-known in sailing circles for his succession of boats named Easy Tiger. He’s moving on from his Melges 32 to an MC38, which will be Tiger number five. “The boats are awesome, really powered up,” Way said following his helming debut, adding, “in a five boat fleet you can be first or last. We proved that.

“In terms of keelboats the MC38 takes a lot more work downwind, you have to sail deeper angles. My Melges planes earlier, these are more about displacement and it’s going to be fun learning. Upwind was fine, pretty much the same as a normal upwind boat …a little bit more finicky but a having a good main trimmer such as Doug McGain helped a lot.

“We are only one point behind ‘Chappo’ (David Chapman on Ginger) and might just sneak in.”

Once his MC38 is “tiger-fied” Way plans to stump up for stage two of the 2017 Winter Series in June, and beyond.

Ginger’s tactician David Chapman said of the day, “Racing was very tight on a light air day. The fleet’s not so used to the bump in The Sound, which threw in something different for all of us. We were consistent today and we’re happy where we are. Chris [Way] did a really good job.”

Three more races are scheduled on Sunday April 23 under the Middle Harbour Yacht Club’s race officer Ted Anderson and the forecast indicates 5-10 knots WNW thanks to a high pressure system over the Tasman Sea extending a ridge along the NSW directing light winds to the coast.