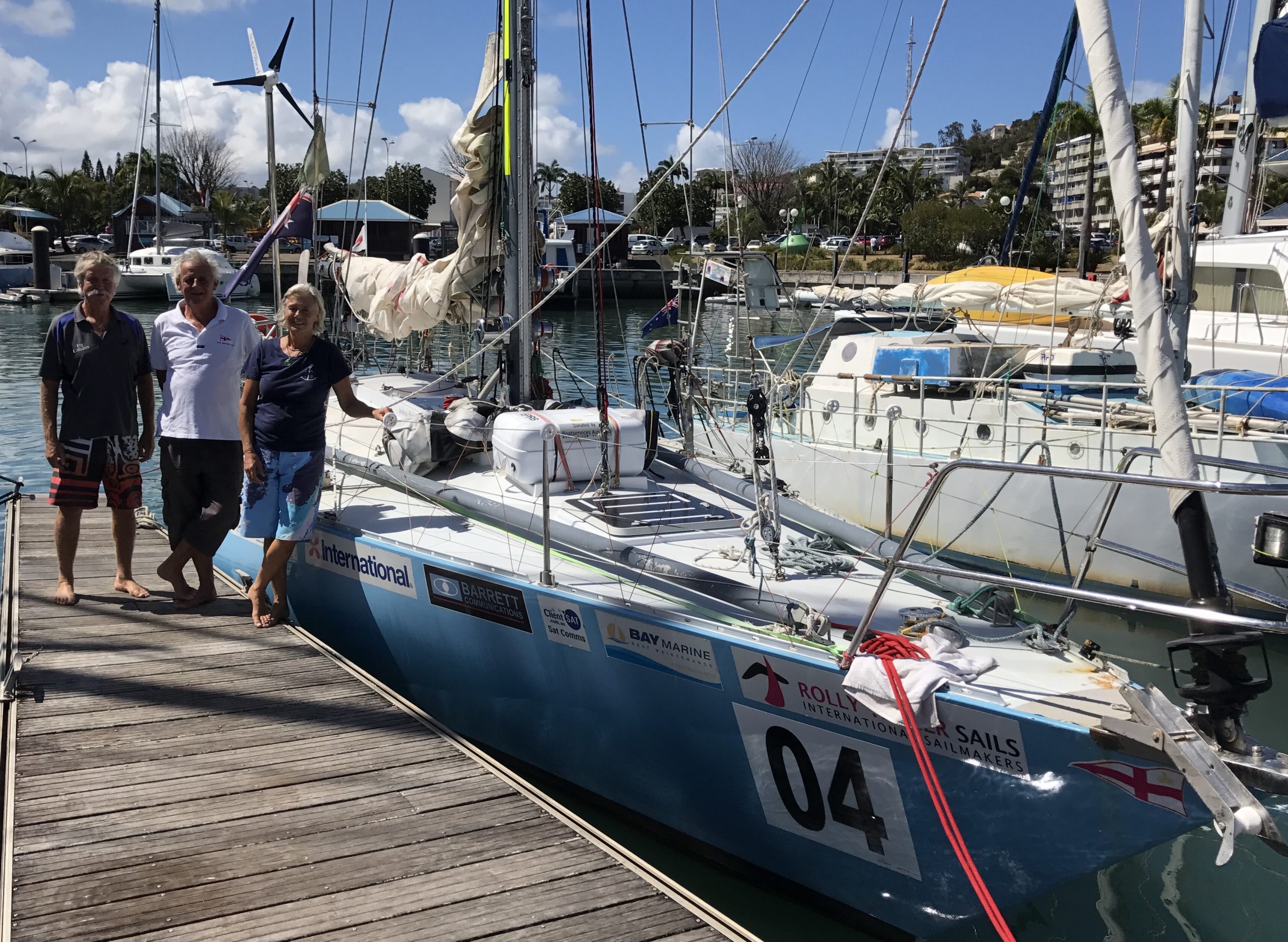 Jon Sanders with Pip Sawyer and John Sharpe in Noumea.

Jon Sanders arrived in Bundaberg yesterday (August 28, 2017) and now just needs to sail to the other side of Australia to complete his 10th circumnavigation of the world. Here is his latest blog, sent while in transit from Noumea:

Departed City of Noumea, New Caledonia for Bundaberg State of Queensland, Australia. I was going to leave on the Saturday but didn't. Slack you say. Common sense I think. Fresh west and Sou-west wind forecast (over the weekend). True and proper head winds. Means going nowhere much. Bumpy.

As it transpired, when asleep, as snug as a bug, – in the protected comfort of Port Moselle Marina – Noumea. 5 yachts outside at anchor or on moorings went onto the rocks. Sadly damaged. I think nobody was onboard. Other yachts with crew OK.

Tied near Perie Banou in the Marina were Pip Sawyer and John Sharpe in their wonderful New Zealand built Elliot 45ft named “Sharp Focus”. Pip and John would entertain me with the odd evening meal. A few drinks first. Of course.

At the near end of the northern section of the Marina are the Noumea markets. Open every morning. Spacious, clean, organised. Heaven for Pip. Fresh produce. She knows what she wants – loves to cook. Can she cook.

The night before I left, spaghetti bolognaise. The major ingredients spent more than an hour in a steaming pressure cooker. Plus the spaghetti expertly tossed and placed on our plates with two spoons.

Gosh, I'm not used to all that.

Can openers on my yacht.

Pippa goes back to the crowds of past former Alan Bond heady days, Admirals Cup, America's Cup and the rest. Years of it. But now exploring the South Pacific takes the cake. What nationality? British, Australian, NZ. Take your pick. Pip better not stand for Australian Parliament with all those nice nationalities. It's illegal.

I discovered what makes Pip wince. The northern end of the Marina are the markets. A hundred or so meters further on (the right hand side) is an “establishment”. I mentioned I visit. As I do.

I remember her smiling partner (John Sharpe) from on board Peter Milner's yachts. (Western Australian boat builder – who would build his own ocean racing yachts). As they would pass my own Perie Banou's.

Oops that might suggest his yachts would come from behind. Ok, maybe they were going the other way.

Peter always had a very regular crew. Terry Page and co. (Terry did a Cape to Rio Race in 1976 on Perie Banou (1)). He will be reading this.

Talking of boat builders. I had, via Royal Perth Yacht Club, surprise email from Doug Brooker. Sydney. Doug and I have said hello to each other (as we sailed by, going in different directions on Sydney Harbour).

He obviously recognised my yacht. I am unlikely to forget his name. As this very yacht sails about the world, and must clear in and out of ports. Requires filling in documents. Same questions, always the same.

Here is a bit he wrote.

Built 1971 as Pilgrim. Went in the 1971 Sydney Hobart Race. Then in the 1972 Brisbane Gladstone Race. She got clobbered by a 130 knot cyclone, but came out unscathed. Then she came 2nd in the World One Ton Cup held off Sydney.

Thanks Doug. “Touch wood” your boat is still unscathed. As they say. “It keeps on keeping on”. It does so too.

Before leaving Noumea. Preparing to go. As one does. Thinking to myself. The gear is good. Everything fine. I can go anywhere. As I usually do. Motor out the Marina into the beautiful, now quiet wide lagoon. Connect the electric tiller auto steerer. Press the electric auto start button. Makes a funny noise. Looks jammed. Is jammed. Won't work. Blimey. Not a lot of wind for the wind vane self steerer – connects to the steering wheel. Never the less flick the lever. Pull the pin on the wind vane. The robust cogs connect and the thing is supposed to start steering.

But it didn't. The top cog moved back on the shaft, came out of mesh and jumped connection with the bottom cog. Blimey # 2. What's going on?

It took me about 1 1/2 hours to fix the wind vane. Awkward. I needed a nylon or nylex spacer to keep cog in position. Not got any of those. I made two spacers (either side of bold cog on shaft) out of cable ties and lashing. Amazing, works a treat. Plus located the cogs perfect dead centre – miracle. Ace again.

Later took the back off the electric auto steerer. Made it sort of work for short time. I'v worn it out. I think it has used by use. It is for light airs. Probably last a life time on Sydney Harbour or the Swan River Estuary. I will buy another in the advent the self steerer cannot be made to work.

With Skeg supporting rudder plus helped by being an older design I can make yacht steer itself. With different yachts – been there, done that. Not as efficient. Not so nice.

Anyway for now, looks all good.

On very long haul, – as in former years, I have carried spare wind vane self steerers. One can change them over or use them for spare parts.

When you read this I should be arriving Bundaberg. (When no one is looking I might sneak a Bundy in. (Rum. – I.E lots of sugar. Cane sugar).

They sure know I am coming. Getting bombed by emails. Some remind me to let ” Yacht Report at Border Force” know I am coming at least 96 hours before arrival. (Otherwise big penalties).

I did that from New Caledonia and just up dated my ETA.

There are clues when nearing Australia. Wind and weather does different things. A fly will fly into the cabin and land in your coffee. (Likely to be more than one if its soup). That's because Australia breeds long range fly's.

Knew you wanted to know that.

They are actually part of the environment.

Best regards to all. (Bundy here i come).