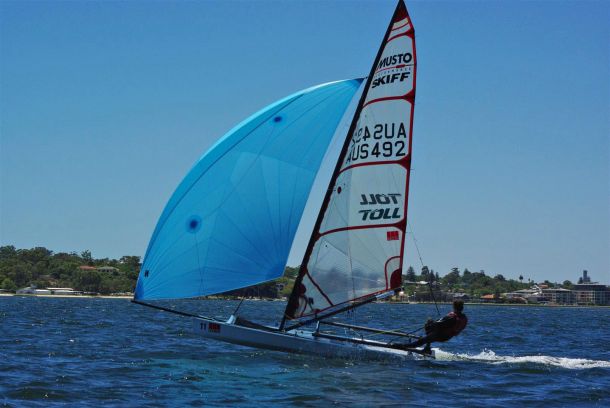 Jon Newman has confirmed his ownership of the World Championship for another year. But it’s not over yet, with second to seventh place open for the taking.

In a south easterly that made it interesting for the mark laying team, let alone the RO, three races were sailed today. With more than 20 knots in the gusts, you would expect it to be choppy and hard to sail on, but the flat water that was on offer was taken up with gusto by the Musto sailors. Another day of Snakes and Ladders loomed.

The first race of the day had the majority of the top ten heading left only to find that going right was the paying proposition. Denis Jones found himself in the lead at the bottom mark and took a right, to find that those who headed left managed to get past him at the top. Jon Newman took the lead from top mark to bottom mark and saw Marcus Hamilton catch up and Thor Schoenhoff slip into third place and they didn’t change their positions from then on; giving Jon Newman a first for the day.

Race two started with a general recall and the “soft black” or U flag was in evidence. The breeze was oscillating 10 to 15 degrees across the course and the first windward had Brit Tom Conway rounding first with Thor and Jon Newman in hot pursuit. The down wind section was again affected by the left/right pressure and Jon Newman used his skills to take the bottom mark in first place. John Reekie had come into play by this time and was sitting behind Thor Schoenhoff in third. The second lap had a reshuffle of the pack with Denis Jones and Richie Robinson making initial gains but Marcus Hamilton went with them and managed to get past Jon momentarily, only to have Jon slip past him in the next lap and take first again with Marcus second and Thor in third.

Race three had Paul Dijkstra at the pin end, watching the sponsor’s boats up the river in an associated regatta of their own, lifting about 20 degrees and took the view that going left would be of benefit. The top mark was his on the first rounding followed by Jon Newman and Marcus Hamilton. Still in front on the down wind, Paul took the other gate to Arthur Brett and watched him get to the front and had to battle all the way back to the top mark with him. Both of them were caught at the top by a lull in the breeze and Jon Newman got to the top mark and grabbed hold of a passing gust to slip past them and hold the lead to the finish.

Jon turned up the volume as he shouted his joy. World Champion again.

But still the question has to be answered tomorrow. Who will take the minors? There are a lot of people interested in the answer.

Full results are available at http://www.mustoskiff.com.au/