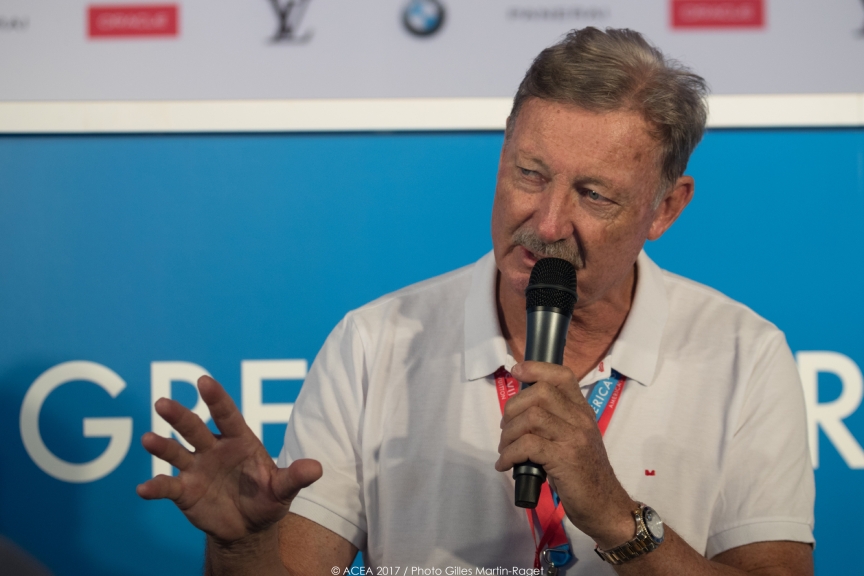 John Bertrand comments during the build-up to the 35th Match. Photo Gilles Martin-Raget/ACEA.

While there is no denying the sailing pedigree of Emirates Team New Zealand’s Olympic-winning helmsman Peter Burling, there is still one major question that is yet to be answered – Does Pistol Pete have enough match racing experience to handle the pressure of battling against Oracle Team USA’s two-time America’s Cup winner Jimmy Spithill on the biggest stage of all, the America’s Cup Match?

That was the question posed by legendary skipper John Bertrand, whose Australia II famously broke the 132-year stranglehold American teams had on the America’s Cup by winning the 25th instalment of the prestigious competition.

“It will be decided by that human battle between Jimmy (Spithill) and Peter (Burling),” argued Bertrand, casting his eye over the mouthwatering encounter coming up between the Defender Oracle Team USA and the Challenger Emirates Team New Zealand, starting on 17th June. This head to head is a rematch of the 34th America’s Cup in which Oracle Team USA remarkably recovered from an 8-1 deficit to retain the ‘Auld Mug’ by beating the Kiwis 9-8 in what many people call the greatest comeback in sport.

“There is nowhere to hide and so Burling has to be able to perform while being under that massive pressure, not only of the occasion but of competing against someone like Jimmy.

“Burling learns fast but time will tell if he can lose those little mistakes that we have seen . He has a certain X-factor, there is no doubt about that, but he has never been under that intense spotlight.

“You can’t simulate the pressure of the America’s Cup Match in which every decision is crucial and every mistake is magnified. Great people make the right decisions at the right time, that’s the big difference, and you can’t fake that out there on the water.

“We have seen that the start of races are fundamental and so that is something Burling needs to work on and get right because that could prove crucial.”

Spithill has already enjoyed the upper hand over his rival Burling, with Oracle Team USA beating Emirates Team New Zealand in both of their previous duels in the Round Robin stage of the Louis Vuitton America’s Cup Qualifiers.

While casting doubt over Burling’s match racing experience, Bertrand has no doubt about Jimmy Spithill’s credentials, highlighting what he thinks makes the Oracle Team USA helmsman a true leader.

“Jimmy is a real tough competitor and fits that Oracle Team USA DNA of being physically and mentally fit,” added Bertrand. “I also think he thrives in adversity, so it is a strong combination of being a really incredible sailor but also a really tough competitor.

“One thing Jimmy does have is that complete leadership aspects. It is not just the stuff he does in the boat, but everything in the gym, around the base, every aspect of the team.

“Leadership is key. He’s proud about his position and it shows with that team.

“One of his real strengths is his match racing toughness and his instinctive reactions to situations when they arise.

“That experience could prove the key because he will be incredibly difficult to beat.”