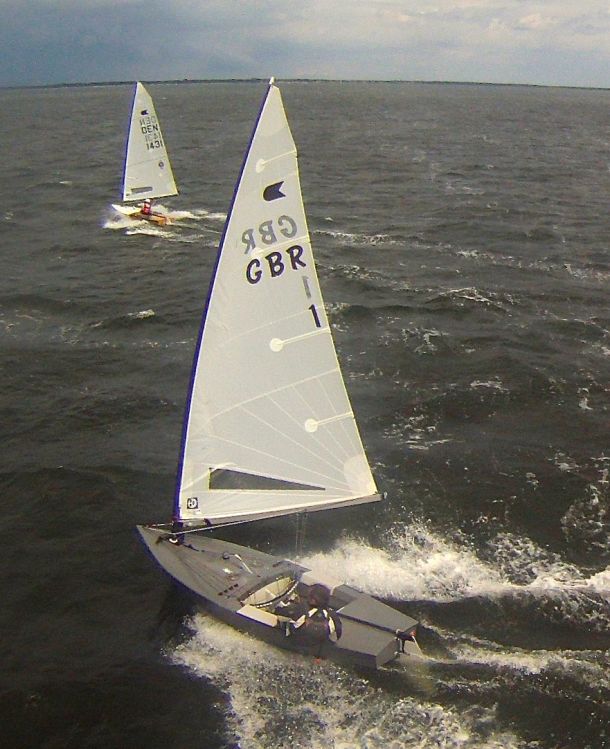 Jim Hunt (GBR) has taken the lead for the first time at the OK Dinghy World Championship in Puck, Poland after only one race was sailed on the third day. André Budzien (GER) drops one to second and Bo Petersen (DEN) moves up to third.

It was a long day in Puck with a series of weather fronts bringing heavy rain and strong winds. With forecasts of more than 30 knots, the fleet arrived at the venue to find a four hour postponement flying. Most of the fleet spent the morning sheltering in coffee shops and cafes waiting for the rain to subside and for any further news from the water. The rain did subside, briefly, but there was no more news so at 14.30 the fleet prepared for sailing without a discernible change in conditions. It was wet, cold and windy.

With a stiff wind ranging from 18 to 24 knots it took three attempts to get the start away on a heavily pin end based line. Eight boats were black flagged including many of the front runners. Petersen was the early leader on the upwind, with Stefan Myralf (DEN) and Budzien rounding in second and third at the top. Petersen kept his lead on the reaches and the second upwind, but Budzien sailed a better downwind to lead at the bottom and extend upwind for his second race win in a row. Petersen crossed in second and with Myralf picking up a black flag, Hunt took third.

With enough races now sailed for a valid championship, the race officer sent the fleet ashore.

Hunt said of the day, “The pressure changes were not so big today and the shifts were smaller and a bit more stable. The shifts didn't last too long, so once you got into one you could wait for it to come back rather than look over your shoulder and watch it get worse. Downwind there was enough pressure to use the waves properly but it wasn't anything too scary.”

On race winner Budzien, he said, “I thought Andre was on another level. He was still bossing the boat around while the rest of us were clinging on a bit.”

After five races, the championship is now past its half way stage, with a maximum of four races still to be sailed. With the discard now in effect, Petersen can discard his black flag and is back in the top three. Jørgen Svendsen (DEN) dropped out of the top three after capsizing at the bottom of the run, twice, and didn't manage to finish the race. With Greg Wilcox (NZL) and Mark Jackson (AUS) also picking up black flag penalties today, there are now seven boats in the top 10 carrying a high score, so any more mistakes would be very costly. Ever the optimist, Hunt, the 2004 World Champion, commented, “There's plenty more damage still to be done.”