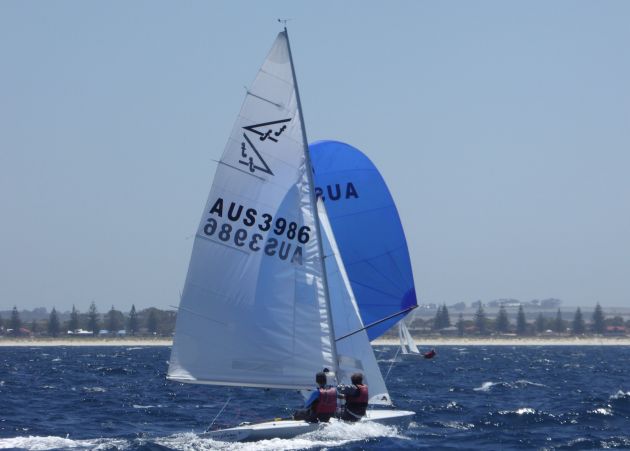 The Jerwoods on their way to the title. Photo Jonny Fullerton.

The heat arrived in Esperance with light to moderate breeze for one final race to decide the gongs at the 2017 Gemmill Homes Australian Flying Fifteen Championship.

An early start and a windward/leeward course was set for the final showdown. The breeze fluctuated between 8 – 14 knots from N/NE with plenty of pressure puffs coming off the white sand dunes in Esperance Bay.

The start was slightly relaxed but Philippa Packer & Dean McAullay (Absolutely Ffabulous) drove off the line close to the committee boat end to get an early edge, however it was the boats at the pin who worked the left (inshore) side of the course that crossed in front for the first top mark turn.

No surprise as champions elect, Nick & Janet Jerwood (Ineffable) had their bows in front of another SoPYC boat, Greg Tonnision & Mark Lovelady (Spot the Difference). Alan Bax & Simon Childs (Fforever Young) led a bunch of the usual suspects in pursuit.

Tonnison & Lovelady stuck to the Jerwoods like glue to reduce the lead at the gate to a single boat length. Places were shuffling in the top ten as a number of small pressure puffs wafted down the course.

Tonnison & Lovelady attached the Jerwoods up the beat crossing tacks until they got the edge picking up a pressure shift to tack across their bows. At the top they managed to open out a 6 boat length lead on the Jerwoods. Ashley Smith & Adam Kingston from Sandgate YC in Queensland sailed well to move up to 3rd and local EBYC sailor David Swan (Swanny) & Matt Elliot with the bit between the teeth in (Phar Lap) 4th.

Down the second run the Jerwood machine closed the gap to 1 boat length at the gate and spectators expected the inevitable. However the other SoPYC pair, Tonnison & Lovelady were not going to let them have all the glory and the next upwind leg was an absorbing tacking dual with the lead changing hands several times.

Third and final time round the top mark and the Jerwoods had managed to snick in front once again. Swanny rode Phar Lap into third with the Queenslanders chasing.

The final gate rounding saw the battle close up again between the lead pair and more changes in the 3 – 8 positions. The final upwind leg was another absorbing encounter with the lead again swapping. Just when we thought the Jerwoods would add another bullet to their collection, Tonnison & Lovelady got the better of them in the closing stages to take the gun and move another place up the leaderboard in the process.

Philippa Packer sailing with Dean McAullay (RFBYC) sailed a good regatta finishing 6th overall as first female skipper and 6 places in front of her husband Ron Packer back in 12th.

87-year-old veteran Bill Shand from Victoria sailing with David Parish finished all races to finish 24th overall, not too shabby!

Karen & Russell Dawes (Eagle Eye) from SoPYC picked up the trophy for first Silver boat. (Age of boat! not colour!)

So Nick & Janet Jerwood from SoPYC win their 3rd Australian National Championship title to add to their world championship and UK National winners medals. They serve notice to the visitors travelling to the Flying Fifteen World Championships in Napier, New Zealand in February.

The regatta will be remembered for sublime sailing conditions, blue skies, turquoise waters, strong breezes, waves (err ripples in Esperance) and a social program you would want to emigrate to WA for!