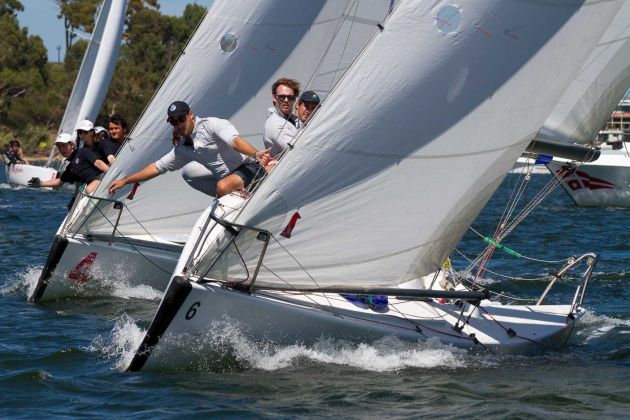 During the lunch break on Day 2 of the Schweppes Little Wheel Youth Match Racing Regatta, a couple of officials observed that Matthew Lingard had been desperately unlucky not to have won some of his races. He stayed out of pre-start trouble and in several races led at the top mark against more fancied opponents, only to capitulate on the final leg. Following the lunch break, Matthew found his groove, winning the last four races of the round robin. His score tied with that of semi finalist Mark Spearman in the second round robin, but with just two wins from the first round, it was not enough. His performance in his first match racing regatta does suggest however, that he may be a skipper to watch in the future.

Difficult conditions tested the race committee and competitors on the Canning River today. The breeze favoured the south east for most of the day, fluctuating from 8 to 15 knots, but violent swings forced even the best skippers into error. In flight four, sailed after the lunch break, the first pair finished without incident, but with a huge windshift, the second pair sailed straight to the top mark without having to tack, forcing an abandonment. A further sixty degree shift while the race committee reconfigured the course was typical of the frustrations faced.

Regatta leader and favourite Matt Jerwood suffered his first defeat today. In the pre-start area everything appeared to be going to plan when Jerwood guided his opponent Ethan Prieto-Low out to the left until the start signal sounded, wheeled around for what should have been a comfortable two boat lead, when Prieto-Low picked up some increased pressure when Jerwood was almost stalled near the start mark. Suddenly Jerwood found himself on the outside of an overlap and by the time he was able to respond and give chase, he was several boat lengths behind.

Prieto-Low did a good job at maintaining his lead, covering every move made by Jerwood, though by the time they reached the top mark for the last time they were only centimetres apart. Jerwood established a windward overlap but when the two were nearly level, Prieto-Low defended his position with a hard luff. Jerwood could not respond in time, there was contact between the sails, Jerwood was penalized and it was all over. When Lachy Gilmour also defeated him in the final flight, just a single point separated the top two on the leader board.

So the semi finalists will be Jerwood, who will select his opponent at tomorrow morning’s briefing, Lachy Gilmour, Will Boulden and Mark Spearman. With a cyclone forming off the North West coast, it is very difficult to predict what the weather conditions will be for the final rounds, but the likelihood is for further light and shifty conditions.

Detailed results are available at http://www.matchracingresults.com/2016/little-wheel-regatta/.