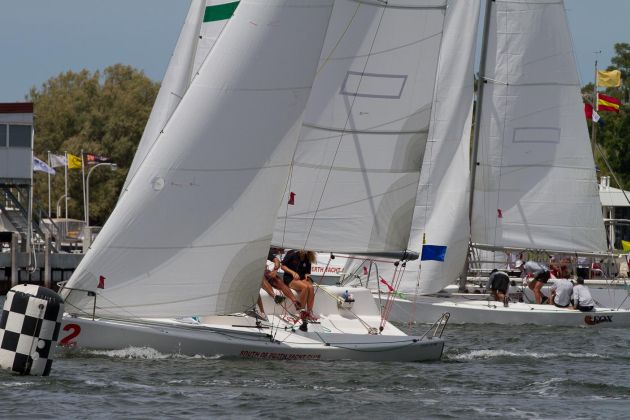 Matthew Jerwood shot to the top of the leader board in the Schweppes Little Wheel Youth Match Racing Regatta hosted by the South of Perth Yacht club on the Canning River with a perfect record of seven wins from seven races.

Light and shifty south easterly breezes challenged all skippers and several of those who neglected to cover opponents who tacked away, paid the price.

At the completion of the first round robin, Jerwood enjoys a clear lead ahead of Lachy Gilmour, Will Boulden and Mark Spearman, all of whom have secured five wins.

Queenslander Annie Eastgate, the only interstate entry to the regatta and also the only female skipper in the fleet has two wins and will need a special effort in tomorrow’s second round robin to make the semi finals on Friday.

Whilst the results indicate the domination of the top four teams, many of the races were very close, with at least three decided by lead boats not being able to get far enough ahead to clear penalties accumulated on the course.

Weather conditions for tomorrow are forecast to be similar to today.