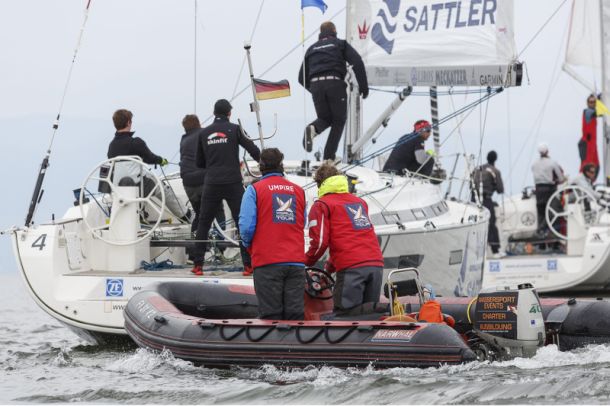 Langenargen, Germany (23rd May 2015): Croatian match racer Tomislav Basic (TB Race Team) today vaulted to the top of the leaderboard at Match Race Germany, World Championship stage of 2015/16 World Match Racing Tour. Basic’s 9-2 win-loss scoreline secures his place straight the Semi Finals, while the 6 next teams will compete in a compressed Quarter Finals round, the top 3 skippers of which will join Basic in the Semi Finals.

Commenting on his qualification to the Quarter Finals, Ellegast was pleased with his performance around the race course; “Today it's gone really well. We won all our starts, and in match racing, winning the start is key to securing victory.”

Tour Card skipper Reuben Corbett sailed one less race to reach his place in the Quarters following damage to his boat, but was relieved to make the line up. “It’s taken a bit of getting used to [sailing these boats] but we’ve scraped into the Quarters and we are looking forward to getting back out there to make amends on how we’ve been going so far.”

Heading home after a disappointing day were Poland’s Przemyslaw Tarnacki (Energa Yacht Racing Team) and Hamburg sailor Tim Kröger (New Wave by adidas). Kröger was awarded a Wild Card for the event and assembled a young crew for the week “My young crew mastered the challenges well this week and have learnt a lot to work with for the future.”

Also for 24 yr old Max Trippolt from Bregenz, his results were not enough to make the Quarter Finals finishing in eighth place on countback. “We were satisfied with our performance and have enjoyed the very well organised event” said Trippolt, “We started well and were able to win matches against strong teams. In the end, it was mainly oversights that missed us qualifying for the Quarter Finals, but we learned a great deal.”