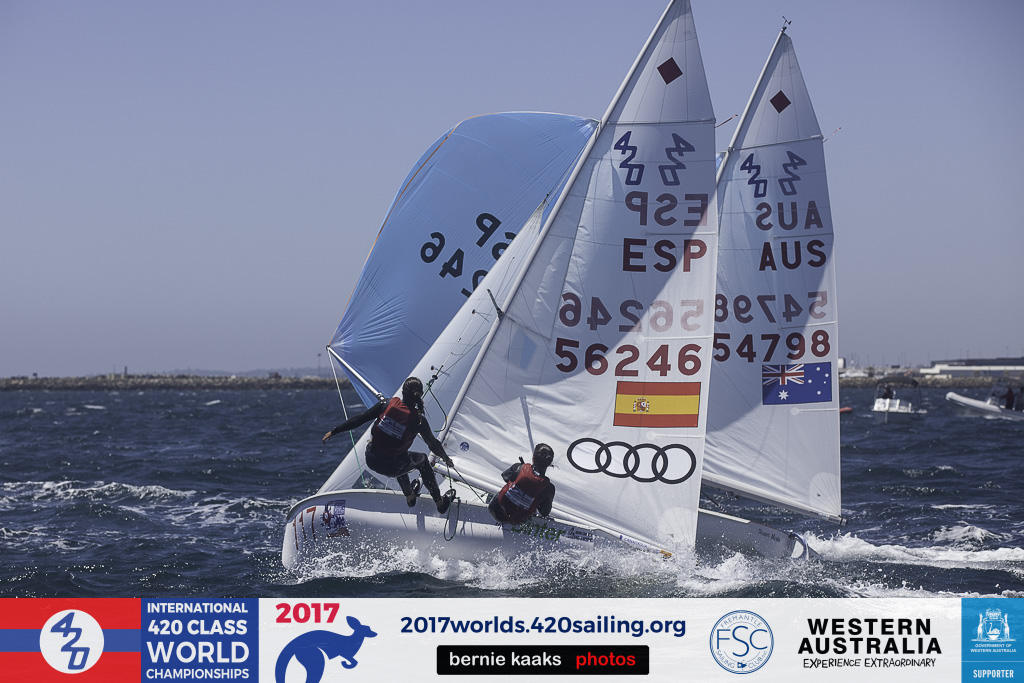 The final race of the 420 Worlds underlined the dominance of Spain’s team in the 420 World Championships at Fremantle, but with some twists and turns. Overnight leaders Carlos Balaguer and Antoni Massanet put themselves under pressure with a 13th placing in the penultimate race.

A general recall in the last race forced a re-start under black flag conditions and in its anxiety to win the start the team was over the line early and disqualified. The mistake was costly, moving them down to third. Brothers Enrique and Pablo Lujan took full advantage of the situation, with first and third placings on the last day to wrap up the world title by seven points. Albert Torres and Francisco Mulet consolidate their second place to make it a remarkable one-two-three for Spain.

It was a fitting result for the team, who were dominant throughout the regatta, which was run by Fremantle Sailing Club in fresh conditions. Italian and French teams showed glimpses of individual brilliance but not the consistency of the Spaniards. Australia’s Chris Charlwood and Josh Dawson led the points table early, but lost a race due to gear failure, which meant that all completed races had to count in their score. A disastrous 27th on the second last day virtually snuffed out their campaign for a world title.

Australia’s top two crews in the Ladies division were separated by a mere three points prior to the last day. Leaders Nia Jerwood and Monique de Vries scored a win in the first race of the last day, but Victorians Laura Harding and Ellie Grimshaw were second, keeping the pressure on. The leaders started poorly in the final race and found themselves battling for a top ten spot while the Victorians were third in the middle stages of the race. Victorians Sophie Jackson and Laura Thomson bolted away from the field to score their first win of the series. The Brazilian crew put in their best performance with a second place and Harding and Grimshaw were fourth.

All eyes were now on Jerwood and de Vries, who were dicing with Spain’s Maria and Pilar Caba for seventh place. In a spirited charge for the line the Australians defended their position well to score a seventh place, which earned them a tie with the Victorians and victory on a countback. The subdued return of boats to shore was a good indication of the uncertainty that surrounded their final position.

Monique expressed her thanks to WAIS coach Belinda Stowell-Brett, giving her credit for their preparation for the regatta. “It was a pretty tough regatta actually,” she admitted afterwards. “The girls who finished second sailed really well all week and really put it to us in the last race.”

Nia chipped in: “The thing we had to work on was our speed. We’re used to sailing the 470 which is pretty quick upwind, but we think we’ve improved our downwind a lot, especially during the week.”

If the girls were subdued, the same could not be said of the Under 17 division, where the winners were greeted by an ecstatic coach and deliberately capsized their boat a few metres after the finish line in celebration. Martin Wizner and Pedro Ameneiro started the series with some unfortunate results and appeared on the leader board after winning three successive races. With two second places on the last day the boys finished three points clear of early leaders, Italians Tommaso Cilli and Bruno Mantero. Demetrio Sposato and Gabriele Centrone were third.