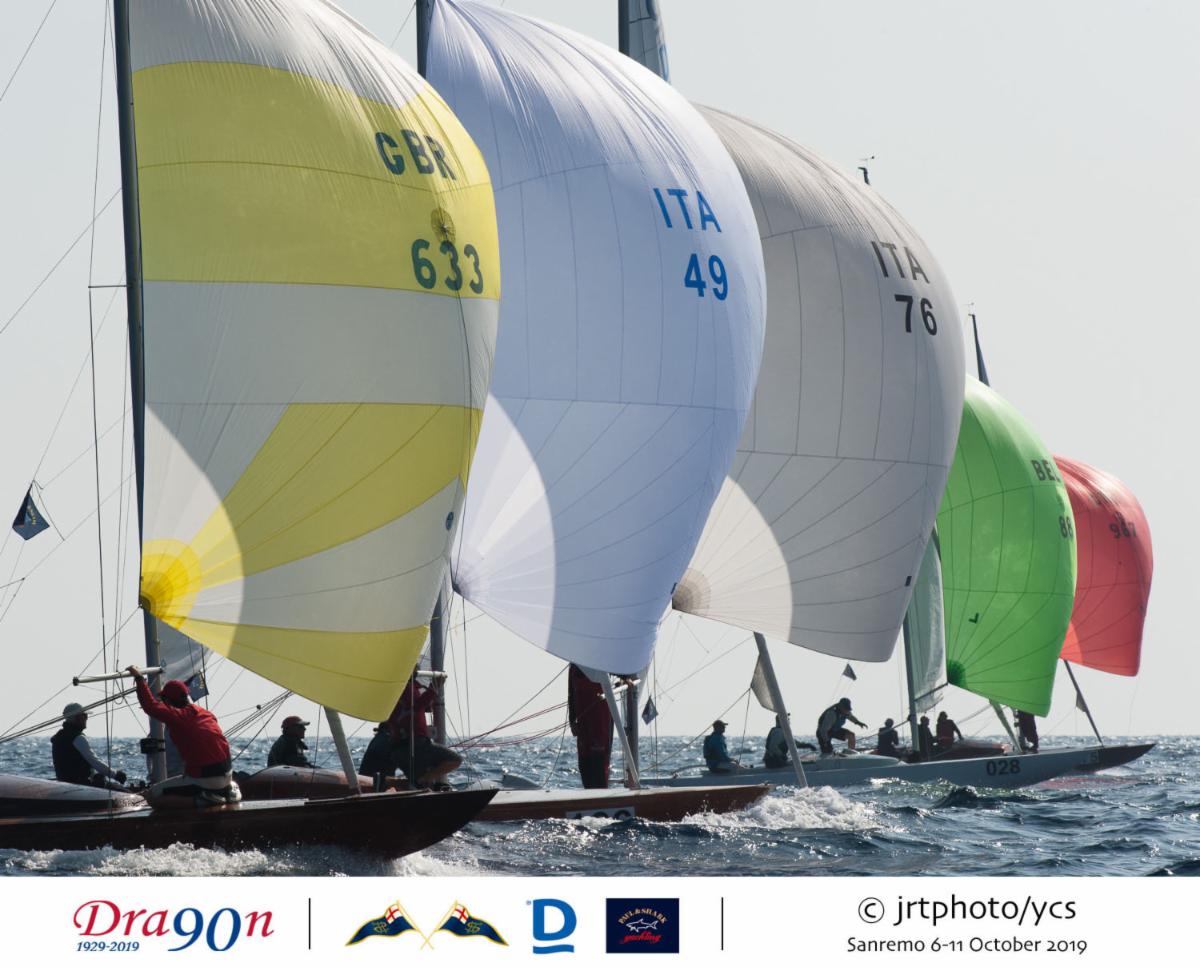 The Dragon 90th Anniversary Regatta concluded in spectacular style, with two glorious final races in an 8-10 knot sea breeze, and a prize giving party that matched both the Dragon and the Yacht Club Sanremo’s renowned reputations for warm hospitality and exceptional camaraderie.

For the 150 crews, the regatta will live on in their memories for many years to come. It brought together Dragon sailors old and new from all four corners of the globe to Italy to celebrate their beloved class.

Racing has been superbly competitive, but it has only been a part of the story. Just as important has been the opportunity to mark 90 years of a boat that Johan Anker originally designed to be an inexpensive inter-islands cruiser for young people.

From those simple beginnings has grown a class that transcends generations; that safely negotiated the transition from wood to GRP; that not only survived deselection as an Olympic class but used it as a platform to launch a whole new era of growth and success; and that today is one of the strongest international sailboat classes in the world.

The final day of racing in Sanremo was an absolute cliff-hanger as the leading teams played snakes and ladders on the leader board. The quality of the sailors is so high that the slightest stumble is punished mercilessly and several of the leading teams found themselves well down the pack in the opening race, as Anatoly Loginov sailing RUS27 ‘Annapurna’ romped home to race victory.

Going into the last race just two points separated the three leaders, Jens Christensen in DEN410 ‘Out of Bounce’, Victor Fogelson in RUS35 ‘Sunflower’ and GER16 ‘Ingrid’ sailed by Dirk Pramann. With all races to count the regatta was still wide open.

Even getting that final race started was nerve-wracking as the race committee battled to get the fleet underway before the 16.00 cut off time, something they impressively achieved with just minutes to spare despite a general recall.

Once underway it was to be nip and tuck all the way and as the teams crossed the line, led by Eugenii Braslavets in ITA77 ‘Bunker Prince’, none of them was quite certain who had won overall.

It was only on arrival at the dock that Danish Olympian, Dragon European and two-time H-Boat World Champion Jens Christensen, crewed by Anders Bagger and Thomas Schmidt, was confirm as the Dragon 90th Anniversary Regatta Champion by a seven point margin over Pieter Heerema in NED412 ‘Troika’ who had finished second in the race. Third place overall went to Christof Wieland helming GER69 ‘Dirndlwind’ with Braslavets fourth.

After racing Jens Christensen explained, “In the first race we got a terrible start and we kind of wiggled our way out and we saw who was up there, so it was not disastrous, and we fought our way back and got10 or 15 boats, so we finished 20 something.

“In the second race, we got a good start and were fourth at the top mark and we could see how things were playing out. It didn’t look too bad, so we were just trying to hang in there, but we were not 100 percent sure. I felt it looked pretty good though.”

Racing in the Silver Fleet was equally exciting with victory ultimately going to Per Arne Nilsen sailing NOR275 ‘The Knucker’ with Philipp Skafte-Holm in DEN394 ‘Blue Lady’ third and Richard Franklin in AUS216 ‘Liquidity’ third.

In the Classics Fleet, for planked wooden Dragons built prior to 1972, first place went to Ivan Bradbury sailing GBR375 Blue Haze, a beautifully restored and maintained 1959 Pedersen & Theusen, which also finished 26th in the overall classification.

At the prize giving there were two very special presentations. The first was a privately commissioned silver bowl which was presented on behalf of the Dragon sailors by incoming International Dragon Association (IDA) Chairman Jens Rathsack to Vasily Senatorov, who stands down as IDA Chairman tomorrow.

Rathsack paid tribute to Senatorov’s personal commitment to the class, and in particular to his determination in bringing this Dragon 90th Anniversary Regatta to fruition. As he came to the stage, Senatorov received a standing ovation from his fellow Dragonists.

The second special presentation was the Spirit of the Dragon Class Trophy, which is awarded to a team from the Classic Division who embodies the true spirit, fair play and seamanship of the class.

Elected by his fellow sailors and to rousing applause, Ireland’s Don Street, who raced the oldest boat in the regatta IRL15 Gypsy, came forward to receive the second trophy. Ireland kept his acceptance speech typically brief, but entertaining, saying simply: “I sailed a 1937 boat at the 75th Anniversary Regatta, here I’ve sailed an 86-year-old boat and I’m 89 years old. I’m aiming to do the 100th Anniversary Regatta too.”

America’s Cup veteran and four-time World Match Racing champion, Peter Gilmour, finished the week fourth overall sailing event sponsor Yanmar’s JPN56 ‘YRED’. The Australian summed up the feelings of so many when he said; “This has been an extraordinary event, to see so many Dragons together and also to have that big race where we were all on the start line together.

“It’s been a difficult week to get all the racing in, but we have a winner and that’s exciting. I’ll never forget in 2001 when they held the anniversary event for the America’s Cup Jubilee in Cowes, and this is just as significant.”

Grant Gordon of event sponsor Glenfiddich, who also raced the regatta at the helm of Louise, finished ninth overall. He paid tribute to many people who helped make the regatta happen. “San Remo did arguably ‘the world’s greatest classic one- design keelboat’, very proud. There was a wonderful atmosphere throughout. Thank you to all the volunteers and organisers for an unforgettable event.”

Whilst the sun has now set on the Dragon 90th Anniversary Regatta powered by Paul & Shark, the season will continue for the Dragons. The next major event is the Dragon Grand Prix Spain and the grand finals of the Dragon European Cup Series, which take place in Puerto Portals, Mallorca from 11 to 16 November 2019.