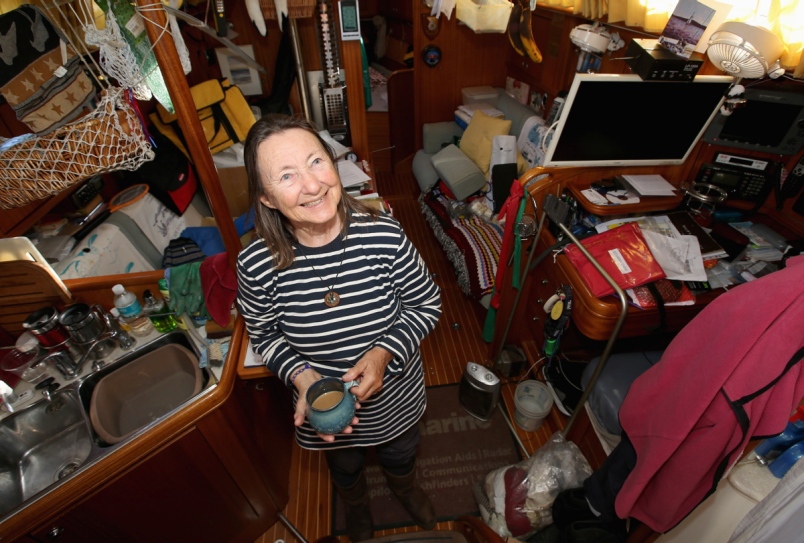 Jeanne Socrates has stocked up enough food for her circumnavigation and beyond. Photograph By ADRIAN LAM

After a two-year wait, 76-year-old Jeanne Socrates is ready to make another attempt at a solo around-the-world sail, without touching land.

In 2016, she started the journey twice from Victoria but had to stop both times due to harsh weather. Last year, plans for another try were called off after a fall from a ladder on her boat led to broken bones.

The retired mathematics professor plans to leave Wednesday about 10 a.m. from the Inner Harbour, and is spending most of her time before that tending to her boat and ensuring that she is fully prepared to go.

If Socrates succeeds in what she hopes will be a seven-and-a-half-month effort, it will be her second unassisted circumnavigation. But it would also make her the oldest person, man or woman, to ever accomplish the feat.

That record is currently held by a Japanese man who made his sail in 2005 at the age of 71. Socrates did her first one at 70, also from Victoria, and still holds the mark as the oldest woman to have done so.

All told, she has sailed around the world solo three and a half times, she said.

Socrates was 48 when she and her late husband, George, decided sailing was something they wanted to do.

“I started sailing dinghies and windsurfing, which I really loved.”

She said while Victoria and B.C. have become familiar territory, her address is “theoretically” in Lymington, England. Nonetheless, she considers home to be her boat, Nereida

The boat is named for the nereids, who are the mythical hand maidens of Poseidon, the Greek god of the sea.

“I’m pretty well mostly on my boat,” said Socrates, who has two children and three grandchildren. “I’m basically a cruiser. A cruiser sails around the world on their boat and just enjoys seeing different places.”

While she spends a lot of time on her own, she said she doesn’t get lonely.

Read the full story at the Times Columnist.